Stinque
Home Latest Comments Log in
If it smells, we’re on it.
Stinque
Assholes, they do vex us.
Manufactured Goods

The Best Office Money Can Buy 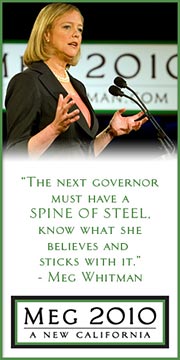 “The next governor must have a spine of steel. Know what she believes and sticks with it.”

Considering Meg didn’t believe in registering to vote until age 46 — and didn’t even declare herself a Republican until two years ago — that’s quite a statement. But our current Governator literally had a spine of steel, and that hasn’t seemed to help him much. For that matter, our MBA President didn’t do the nation much of a favor, either.

But this is California, and we lurve ourselves a good slow-speed chase. Especially when it ends in a wreck.

heh
before I did games I did film effects. June 17, 1994 just happened to be the wrap party for the Arnold movie True Lies. it was actually pretty cool. at the air and space museum.
but no one showed up until AFTER the slow speed chase.

@Capt Howdy: Happened to be at a party myself that night. And yes, we were all waiting for blood to splatter across the White Bronco.

It’s easy to be a CEO during boom times when people threw cash at you.

It’s another to actually lead when the shit has hit the fan. By then most CEOs either eject or get shit canned or really fuck it up. To be blunt that’s usually the best measure of any leader.

Pretty much why Ahnuld failed. Never had to clean up a mess before because it was usually spun away by PR flacks/flunkies. And Last Action Hero doesn’t count.

Hey, look! Richard Wolffe is back from Siberia!

Are you in So Cal? My partner does animation and CG for the mouse….