Stinque
Home Latest Comments Log in
If it smells, we’re on it.
Stinque
Assholes, they do vex us.
Bad Santa

Life During War on Christmastime 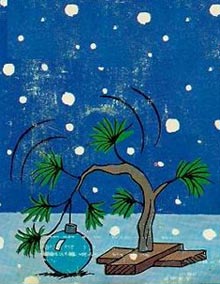 The U.S. Forest Service has banned the name of Jesus from decorations being assembled by children in Arizona for a blue spruce from the state that will become the Capitol Christmas Tree this year, and a legal firm is challenging the censorship.

“The First Amendment does not allow government officials to exclude schoolchildren’s ornaments for the capitol’s Christmas tree merely because they communicate a religious viewpoint,” he said yesterday.

We’re looking forward to the merry Wiccan and Atheist ornaments “able to be seen 75 feet away”. But if we’re so concerned about the First Amendment rights of kids, why are we so upset about them singing for the President?

Eva Malecki of the office of the Architect of the Capitol told WND the ban on “religious speech” on the ornaments was an old rule that had been discontinued some years ago.

Whew. That was close. We were afraid the only place left in DC to properly celebrate Christmas was C Street.

they should avoid controversy and go with something secular.

like one me and my partner did in the 80’s decorated exclusively with green rubber hospital gloves and cans of spam.

The funny thing is that the clear intent of the Forest Service statement is to keep the kids “on topic”, for lack of a better description. They’re basically saying, “We have a theme, so don’t make generic-ass ornaments.”

Reminds me of my old job, where the Mississippi 10th graders were apparently told (the *second* time the test was administered) that they had to address the writing prompt, rather than writing about how much they love Jesus.

Apparently, that seriously skewed the distribution the first year (too many “off-topic” responses).

They got it 100% sorted the third year, as they had students write about someone they respected and/or admired. “Jesus” and “my babydaddy” were roughly equally represented that year, I recall.

Mebbe we should just leave those old-growth trees alone.

October 4? Man, I gotta hurry and go find some kids here who would submit an “Allah akbar!” themed ornament.

@Jamie bar the door: Sounds like a great way for some Girl Scouts to earn their diversity badges.