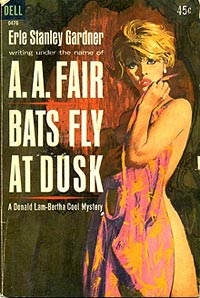 Folks of a literary bent are familiar with the story of how Max Perkins took Thomas Wolfe’s manuscripts to a rendering plant and walked away with Look Homeward, Angel. Or how Gordon Lish trimmed Raymond Carver’s work to the bone and invented minimalism with What We Talk About When We Talk About Love.

Perkins and Lish were editors, not ghostwriters, and their work is (or used to be) considered part of the publishing game. So we’re mildly amused by recurring rumors that Barack Obama had a Little Helper with Dreams From My Father.

As conspiracy theories go, this one’s definitely a letdown after our recent multiple Orlygasms. But since WorldNetDaily is running with it, what the heck.

The evidence for this stems from extensive “stylometric analysis”, which we’ll presume is similar to the detective work that attributes Shakespeare’s plays to anybody but Shakespeare. WND credits the digging to Jack Cashill, an “Emmy-award winning independent writer” whose award we can’t find in the Emmy database, and whose impeccable credentials include linking George Tiller to war criminals.

We’ll pass over Cashill’s textual statistics, which only prove that personal computers have been a mixed blessing, and cut right to his star witnesses. First, from Ayers’ Fugitive Days:

“I picture the street coming alive, awakening from the fury of winter, stirred from the chilly spring night by cold glimmers of sunlight angling through the city.”

Compare that with Dreams, suckaz:

“Night now fell in midafternoon, especially when the snowstorms rolled in, boundless prairie storms that set the sky close to the ground, the city lights reflected against the clouds.”

See how obvious that is? “These two sentences are alike in more than their poetic sense, their length and their gracefully layered structure,” writes Cashill, almost superfluously. “They tabulate nearly identically on the Flesch Reading Ease Score (FRES), something of a standard in the field.”

Funny thing about that — we recently ran a Flesch test on one of Sarah Palin’s manifestly ghostwritten Facebook columns, comparing it to her marvelously meandering going-away speech. Same score.

Alas, no Smoking Blue Pencil there. But what about Christopher Andersen’s new book, Barack and Michelle: Portrait of an American Marriage, which has been making the rounds? Andersen also claims Ayers wrote (or heavily doctored) Dreams — “So [Obama] lied to the American people,” Hannity nodded Tuesday. Doesn’t that settle it?

Well, no — Andersen cites Cashill as a source. And his book is published by Rupert Murdoch. Neat trick. We’ll have to try it sometime.

Who wrote ‘Dreams From My Father’? [WND]

Wow, that’s really far fetched. It is obvious that Obama traveled back in time and asked Julius Streicher to ghost write a memoir which is composed entirely of code decipherable only by 21st century afrosupremist islamofascists, giving them instructions for conquest of the US and final incorporation into the North American Caliphate. In fact, no one has been able to conclusively disprove that Barack Obama was conceived through spontaneous intestinal parthenogenesis during the ritual ass fuckings Streicher got from Goering and that Obama has command of Nazi time travel technology.

if only World Nut Daily had a good editor

Even if true – politicians use ghostwriters all the time. These people are deeply stupid.

@blogenfreude:
not just pols. writers do it to. there is a great book out now that I just read called Ghost Radio of which large portions were apparently ghost written by a blogging friend who wishes to remain a ghost. I guess that was part of the deal.

The Ayers thing has always amazed me – the wingnuts freak out about how he might have been involved in radical actions (not just speech) 40 years ago. But at the same time, they gave all the unindicted Iran-Contra conspirators a free pass: we KNOW they were involved in supplying weapons to our “enemies” roughly 20 years ago, but it’s apparently OK to load up the executive branch with them…

“Andersen relied on inside sources, quite possibly Michelle Obama, to describe how ‘Dreams’ was published, Cashill says.” I might have to rely on my leg, quite possibly my foot, to shove my boot up someone’s ass.