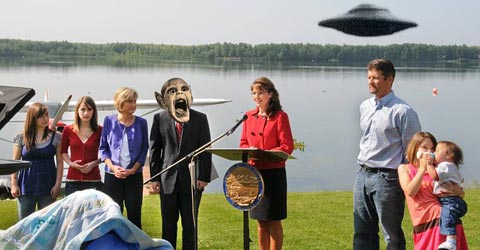 Sarah Palin has been abducted by aliens.

The evidence can no longer be denied: 1,233 words of coherent, grammatically correct English, followed by eight footnotes. Only a higher intelligence capable of interstellar travel could render meaning from the world-famous free verse of her previous speeches and Twitter messages. Earlier known attempts to plant a positronic comprehension chip in George W. Bush’s brain were clearly beta tests.

This explains Palin’s mysterious Lost Week, when she promised to tweet up a storm after her release from the shackles of elected office, yet vanished from the grid following her last official tweet. While we can presume the implantation took only moments, the colon cleansing that preceded it must have been extraordinarily difficult.

Luckily for humankind, this new alien technology has its limitations. While they seem confident to attempt long Facebook posts with it, they have yet to brave the 140-character concision of Twitter itself. Palin’s new civilian Twitter account remains suspiciously empty, while William Shatner lies in wait to once again save the universe.

Any serious policy discussions on FB is like trying to cook gourmet food on an easy bake oven (except in Sarah’s case, the light bulb’s burnt out.)

@ManchuCandidate: Speaking of our stupidest, Politico didn’t say how fucking bizarre her behavior has been, but instead asked whether her “death panel” claims would help or hurt her. WTF?

@blogenfreude:
Poltico’s has been a GOP whore house where a lot of GOP bullshit has been disseminated. Most of their sources are GOP operatives.

Honestly: the death panel thing is entertainment. What will the 30 second spots look like next year? Anybody who brings up death panels in the mid-term ad buys is going to look absolutely silly.

But — the ads may very well feature claims that dirty libs wanted to pay for abortions with YOUR TAX MUNNIE. That attack is just warming up now, and is on much safer ground with respect to riling up the base. It will all become much clearer once everybody gets back into town.

Dodgerblue: Do take note that they got beat 12:3 by the Phils on Wednesday — including a snowman in the fourth. Run production has been a problem lately — they gotta learn to spread out the runs a bit.

Also: it was the Pirates. If it weren’t for the Nats…

@SanFranLefty:
What’s even worse for that kid is, there is allegedly video evidence of her/his (?) conception (something no one should ever see.)

I wonder what this guy has they won’t pay for.

SanFranLefty: See, he knew the USDA inspection was coming up. He knows his eggs are Grade AA, but he wanted to make double-sure.

God damn, that dude is a shithead.

Finally, a health care option the Republicans can get behind funding for:

I thought this type of crazeee was mostly confined to the US, but apparently not. My favorite part is where the “divine healing technicians” remind patients to continue conventional medical treatment – a great show of faith!

On second thought, the Kiwis are doing this for free – practitioners of the same here in the US would probably consider that “socialism”.

@texrednface: it’s not just abortion – the GOP is leading efforts to not have health insurance plans pay for contraceptives, because you know, being pregnant is a “natural” state for women and isn’t a health condition. Planned Parenthood has more info on it. So those of us who live in states with contraceptive equity laws (i.e. insurance companies in the state must pay for contraceptives the same way they would any other prescription) will probably wind up getting fucked if/when health care “reform” passes because the GOP will also probably put a rider on the amendment that says the federal law preempts state law.

And I’ll bet you dollars to donuts that women’s ability to get birth control for $15/month will be thrown under the bus in the name of the greater good of getting the bill passed.

@chicago bureau: Dude has way bigger things to worry about than admitting he’s the baby daddy, what with the four most dreaded words looming over his head (federal grand jury indictment).

@SanFranLefty: You’re suggesting that the Demos would not draw a line in the sand? Shocking.

Nojo, thats not an alien, thats Batboy, he’s not an alien, he’s half bat, half boy. You can’t slip that by me. I was a big fan of the defunct Weekly World News, the stupidest of all the tabloids. “Ed Anger’s America” was a favorite feature. Lots of coverage of angels, demons, leprechauns, fairies, too, these things are under-reported in the press since the demise of the Weekly World News.

@Promnight: You trust the journalistic standards of the Weekly World News on the provenance of Bat Boy? He was indeed an alien that they tried to pass off as the bastard offspring of Ed Anger and Dear Dottie.

@chicago bureau: Also: it was the Pirates. If it weren’t for the Nats…

Careful there Bureau boy…you think we ‘burghers don’t go back a day or two in posts for broadsides such as these? I’ll have you know that I was driving through Bal’more yesterday, and during peak stadium clearing hour there was a lone LaRoche fan flaunting his Pirates #25 jersey to the occasional high five of other, closeted Bucs fans.

The fact that he was fucking traded mattered not…