Wingnut of the Day 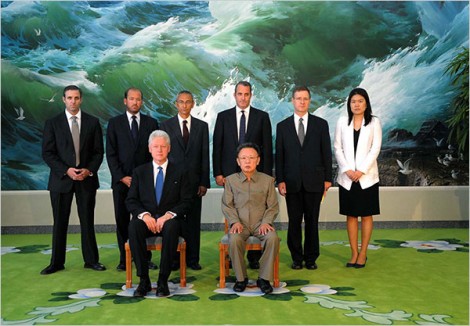 There is something about the way the 2 seated men are posing as such good little boys with their hands in the I’m-behaving-myself position that demands that what I really want to see is Bill Clinton reach over and feel the thigh Kim Jong-Il, who exclaims: “No broh job!”

That is weapons-grade stupid.

She’s has never seen photographs of Korean officials before or any of my family photos.

Can’t she stick to analyzing breasts?

Tweety just said “Bill Clinton is his own Thanksgiving Day float”, after first saying “I don’t know, maybe Regis Philbin could have walked in and [those women] would have been just as happy”.

“that demands that what I really want to see is Bill Clinton reach over and feel the thigh Kim Jong-Il, who exclaims: “No broh job!” ”

I can’t even figure out what this means much less what is wrong about it.

Can the hairline follies be far behind?

@FlyingChainSaw: Ditto. All I get from that is a vague sense of creepiness from Althouse.

@Tommmcatt Floats: Yes. This is the Bill-with-tits-nearby-in-the-picture lady, MC reminds us. You might be on to something there. Seems like she thinks about Bill’s schlong night and day. Bizarre. Good thing she didn’t see the picture of Bill’s plane arriving at the airport. Who knows what she would have made of the fuselage parking at the terminal gate.

@Jamie Sommers: Unwholesome and daffy at the same time. This is the lady that married a fence-post repairman or something that she met as a commenter on her blog? Double bizarre.

Was Althouse one of Orly Taitz’ law school lecturers?

Did they make out a lot?

I mean, I saw a picture of Taitz and Althouse’s name on the same Web page configured in a way that demands what I really want to see is Orly and Ann grinding each others’ mons and shrieking “fuck me, gah! Fuck me!” like badgers being nailed to telephone poles before howling out loud in titanic, hip-crushing, wig-ejecting orgasms.

FlyingChainSaw: Was Althouse one of Orly Taitz’ law school lecturers?

Close to home, dude. Althouse teached at the University of Wisconsin Law School. Which is (a) totes legit, and (b) my freaking alma mater. Watch yourself. Trust.

That said: I think Ann is about ready to lose her Madison privileges if she keeps this up. (Not that she has to fork over the professorship. And not that Madison isn’t home to conservatives — there are plenty. No: in order to have Madison WI 537?? on your return address, there has to be an IQ over 98.6. She’s just about to flunk on that score. Stoughton awaits, Ann — hope you like lutefisk!)

So we have our very own Prop H8 here in Washington, Referendum 71, which is likely to be OK’d for the November ballot this week. It’ll repeal our state’s expanded Domestic Partnership law, but there’s a catch–gay rights supporters need to vote “approve” in favor of keeping the law, while the haters have to vote “reject” to repeal it. Confused yet? Everyone is.

Anyhoozle, the pro-gay rights group, Washington Families Standing Together, just released their first yard sign, apparently trying to appeal to voters’ non-existent sense of compassion by asking them to approve 71 and “Preserve the Domestic Partnership Law.”

(ahem) Con permiso, if I may channel Prommie and FCS–gentlemen I bow before you:

Is that really the sign they’re gonna use?? No no no a thousand times no, gawdammit WTF WTF WTF WTF??!!

Double fuck piss bitch–we might as well give up now.

WFST needs to send out flyers telling everyone of those pigfuckers in the sticks that approving Ref 71 will send every single one of us gawdamn hummuhsekshals to the gas chambers. Tell ’em it means mandatory abortions for gay babies. Tell ’em it means old-timey witch burnings in the town square!! They’ll sprint to their polling place to vote to approve it!!

Tell ’em anything except that it helps us, which–DUUUHHH–is the opposite of what they want to do.

@Original Andrew: “Fags Are Coming For Our Guns!! Vote Yes On 71”

I should add that thanks to a ruling by the Washington State Supreme Dumasses–lying is protected speech, and anyone may lie about anything in political campaigns.

@Original Andrew: This was a Simpsons plot, Homer confused whether voting “yes” meant no, or voting “no” meant “yes.”

When I was a lad, wet behind the ears, as it were, I wondered, I thought to myself, in my ignorance, gee, it seems this representative democracy was necessitated by primitive communication technology, gee whillikers, now that we have this great communication tech, why not let all the people vote on legislation.

But its now all clear to me now, the things that happen in states that have easy initiative and referendum rules make it abundantly clear, letting morons vote on things they do not understand, is a big fail.

As ugly as our politics is here in the US of A, its still better than the way most of the nation-states of the world have managed the issue of governing.

Yeah, whatever. It’s my mutherfucking birthday!

First, you have to get personal input from all 50,000 members of the organization, then anyone who actually makes a decision is bitterly resented and—to cap it off with a cherry on top—they produce this maudlin claptrap of “oh gee willikers, we’ve got to appeal to people’s sense of decency, fairness and dignity, yap yap yap.”

Helllloooooo, Earth to Losers: The “American People,” if they even think about us and our issues at all, go to bed every night feverishly praying that Heysus de Cristo and his BFF George Caligutard Bush order Blackwater to carry out our total extermination.

Find your cojones now or condemn all of us homos to the mercy of these repulsive goons, aka “voters.”

@ALL: MWAH! Now I’m off to cause trouble!

@Original Andrew: Just remember, the rights you were denied earlier this year were a necessary sacrifice for the health care we’re not getting now.

@Original Andrew: “First, you have to get personal input from all 50,000 members of the organization, then anyone who actually makes a decision is bitterly resented and—to cap it off with a cherry on top—they produce this maudlin claptrap of “oh gee willikers, we’ve got to appeal to people’s sense of decency, fairness and dignity, yap yap yap.””

The lefter you get, the more this is true.

See. That’s not so hard.

I nearly fell over laughing at how Dan Savage compared Candidate Obama and President Obama (on GLBT issues, but applies equally to progressive issues in general):

The difference between candidate Obama and President Obama crystallized for me when NBC’s Brian Williams asked the president if “gay and lesbian couples who wish to marry … have a friend in the White House?” The comfort candidate Obama demonstrated with gay people and issues was gone. I don’t remember exactly what the president said, but I will never forget the look on his face. Judging from his pained and slightly annoyed expression, you would have thought that Williams put the question to him in a suppository form.

Have you ever been introduced to someone with whom you’d had a torrid one-night stand and he acted like he didn’t know you? “Don’t know me?” you’re tempted to say in a loud voice. “Honey, you ate my ass.”

Could Barack Obama be that one-night stand?

@Original Andrew: Wow. Thats actually a great image. I mean, it strikes home if you ever went up to say “Hi” to someone you fucked the night before, and they looked at you, like, “who are you,” and you knew, then and there, that you were nothing but a tried up turd of shit.

@Original Andrew: The inability of the ghey rights groups to message properly drives me batshit crazy. And: I adore Dan Savage. He will always have a warm spot in my heart for inventing the sexual definition of “santorum” and for licking the doorknobs at the Gary Bauer campaign offices in Iowa when he had the flu.

@Mistress Cynica: Which kitteh is your avatar?