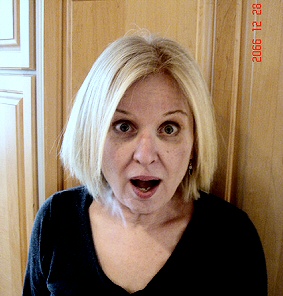 Today we deal with Ann Althouse.  She is the Robert W. & Irma M. Arthur-Bascom Professor at the University of Wisconsin Law School, whatever that is.  She teaches conlaw, federal jurisdiction, and civil procedure. She is, so help me, tenured. Her schtick is that she’s nonpartisan – a total crock given her Bush cheerleading and guest-blogging for that noted nonpartisan Glenn Reynolds.

Althouse is also a deeply silly person. Lefty bloggers love her mainly because she will write about any stupid shit that pops into her head:

As to the zoo, I do think people roam about looking for animals to identify with. No one stares at the camels. There’s always a crowd gazing into the eyes of the chimpanzee. It is far more interesting to watch the people as they watch the animals or to watch the animals and think of people.

What?  Even if those observations are accurate, why write them down? This A.E. Housman quote could not be more apt: “Nature not content with denying [her] the ability to think, has endowed [her] with the ability to write.”

After the jump, check out the professor’s take on Hillary Clinton’s homage to The Sopranos:

Bill says “No onion rings?” and Hillary responds “I’m looking out for ya.” Now, the script says onion rings, because that’s what the Sopranos were eating in that final scene, but I doubt if any blogger will disagree with my assertion that, coming from Bill Clinton, the “O” of an onion ring is a vagina symbol. Hillary says no to that, driving the symbolism home. She’s “looking out” all right, vigilant over her husband, denying him the sustenance he craves. What does she have for him? Carrot sticks! The one closest to the camera has a rather disgusting greasy sheen to it. Here, Bill, in retaliation for all of your excessive “O” consumption, you may have a large bowl of phallic symbols! When we hear him say “No onion rings?,” the camera is on her, and Bill is off-screen, but at the bottom of the screen we see the carrot/phallus he’s holding toward her. Oh, yes, I know that Hillary supplying carrots is supposed to remind that Hillary will provide us with health care, that she’s “looking out for” us, but come on, they’re carrots! Everyone knows carrots are phallic symbols. But they’re cut up into little carrot sticks, you say? Just listen to yourself! I’m not going to point out everything.

Aren’t you glad she’s not teaching psychology?  And check out this little nonpartisan rant:

It was a dark and stormy morning. Are humans to blame? Or are the gods angry that all the world is bowing down today to Al Gore and his theory that the humans cause the storms?

Althouse also started one of the blogosphere’s stupidest controversies – The Jessica and Bill Breast-Awareness Kerfuffle.  Here’s the photo that caused Althouse to go apeshit:

When confronted with her absurd conclusion – that the editor of Feministe purposely dangled her rack in front of Big Dog – Althouse performs a Reverse Malkin that even the Anchor Baby would envy.

Althouse is also an expert drunkvlogger, is scared by cell phones, and remains obsessed with Bill Clinton’s dick.

Is this a person we want shaping young legal minds?  Oy.

I doubt if any blogger will disagree with my assertion that, coming from Bill Clinton, the “O” of an onion ring is a vagina symbol.

Ah, Nuthouse. She freaked out after she was called out on the breast thing and it was bestest ever.

Her assertions are the equivalent of a little girl in the school yard who kicks the shins of her crush.

Sometimes an onion ring is just an onion ring. Though it is reassuring to know we have a vagilant law professor dissecting the diner-fare of campaign advertising.

@Pedonator: “vagilant” wasn’t a typo, was it. Wonderful.

@blogenfreude: Thanks. Sincerely, I think there’s never been a better time for vagilante justice. Long overdue.

Someone should tell the woman that not everything is some sort of fucking symbol.

@Signal to Noise: I think her slack jaw and bugged out eyes are symbols of a fuckwit college professor hungering to gobble camel schlong at the zoo.

I sound like her, don’t I? My self-absorbed mundane observations that I shout and crow about as if I’ve just written the Great American Novel or discovered the cure for cancer? I never realized how much I suck.

What does it mean that I often prefer the onion rings over the always awesome fries (skin still on, with pepper and salt) with my green chili and cheese Itsa Burger combo at Blake’s Lota Burger (NM-only chain)?

What does it mean when I bake an over-sized pumpkin until it’s nice and tender and throw it into the camel cage at the zoo for the camel to fuck while Ann Althouse gazes in wide-eyed wonder and fingers herself into a drooling, grunting orgasm?

Any Fall Out Boy fans here? They just gave fifty large to No on Prop 8.

I had never heard of this Althouse before, and I’ve never watched a full episode of the Sopranos. Is this wrong?

It is far more interesting to…watch the animals and think of people.

Betcha when she watches a chimp flinging poo she thinks of John McCain. (I know I do).

I thought a Reverse Malkin had something to do with salad oil and a scrunchie.

Yes, and yes, they win teh awesome award for today.

@FlyingChainSaw: I see that orgasm, its like Isabelle Huppert in La Pianiste, crouched between the parked cars in voyueristic ecstasy.

I, um, inserted the photo that caused Althouse to go apeshit if anyone wants a look.

@Tommmcatt Yet Again: Meh, not my favorite, but I’ll put kohl around my eyes, dye my hair black and paint my nails black if its gets monies to fight this thing. Also, bad news if you like Cold Stone Creamery: their founders gave money for Arizona’s gay marriage ban referendum.

@Tommmcatt Yet Again: No, it has to do with posters of Rachael Ray and a Hitachi Magic Wand.

@FlyingChainSaw: I thought it was just the expression of someone without a useful thought in their head.

I think we’re both right.

@blogenfreude: Actually, the editor in question was turning back toward the camera. She was holding her fingers for L’il Abner to sniff just a moment before. She really missed the story.

Should I be at all concerned that the date burned into that photo includes the year 2066? Is The Future trying to tell us something?

Are we going to have to worry about some kind of wide-eyed millennial Battle of Hastings reprise or something?

@IanJ: By then they’ll be up to New New New New New Labour, and the country will collapse under the weight of all that stuttering.

@IanJ: The Future is trying to tell us that eventually SkyNet stopped making T-units with humanoid faces. However, Princess Sparkle Pony has informed us all of someone far, far scarier: the guy that Paulson chose to put in charge of all that bailout cheddah.

Sorry I suddenly flashed back to the slightly racist character Thuggee Priest in Indiana Jones and the Temple of Doom. You know, the guy who liked doing open heart surgery using his hand without the benefit of anesthesia.