The Department of Law 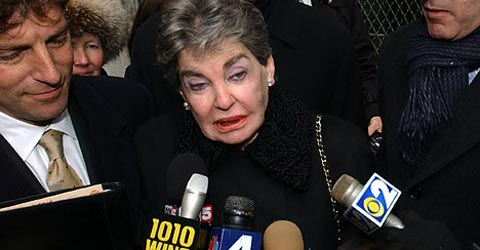 In case you missed it — heaven knows why — Sarah Palin made the network rounds on Tuesday, explaining again why she quit like a coward self-effacingly passed the ball last Friday. And during one of her sandy standups, out popped this gem:

“I don’t think it will be the day after day after day of ethics violation charges that are frivolous, that are ridiculous. I think on a national level your department of law there in the White House would look at this, the things we have been charged with, and automatically throw them out, not make somebody hire their own personal attorney to get out there and fight.”

Of course, everybody jumped on the “department of law” reference, chortling at the latest example of Palin’s fitness for offices she doesn’t ditch. And Talibunny apologists said there really is an Alaska Department of Law, although it’s the same as justice departments elsewhere, and not part of the Governor’s Office.

But as we were considering amusing angles to play on the story, we stopped short.

And we remembered that threatening letter Palin’s lawyer issued on Saturday, calling out an Alaskan blogger by name.

And we remembered the basis of Troopergate, where Palin deployed Alaska’s government on a vendetta against an ex brother-in-law.

And we remembered the letter from Wasilla resident Anne Kilkenny, who cited a “fear of retribution” among those who have crossed paths with Palin.

And then we remembered Richard Nixon and J. Edgar Hoover.

We’ll never face the prospect of Sarah Palin in the White House, and we’ll forever be amused by anyone who thinks she stands a chance. But if by some freak of politics she actually landed there, we have no doubt she would compile an Enemies List, and use every lever of government available to scratch off names.

That’s what stopped us short when were imagining a real Department of Law in the Palin White House: We wrote down “Office of Vengeance.”

In the land of the stupid, the quarter wit is queen.

Consider the word “automatically” – she thinks she’s not subject to the rule of law.

She’s definitely got delusions of grandeur and capriciousness covered.

I figured it out: she’s the Tonya Harding of US American politics.

@Nabisco say Relax:
Except she kneecapped herself.

But, who is Kerrigan? My first instinct is to suggest Bobby Jindal. But the image of him crouched down in a heap screaming “WHYYYYYY?!” does not… wait…. actually, that is a perfect image.

Leona, thats Leona, does I get prize?

@blogenfreude: When I was a kid, I would get very excited to see the “Weinermobile” on the L.A. freeways. I can still sing the song, too.

That’s not Ernest Borgnine in drag?

Dodgerblue: Oscar Mayer had a plant on the east side of Madison. And thus the Wienermobile could be seen driving around town, frequently.

(Incidentally: the smell of the Oscar Mayer plant was, and presumably still is, indescribable. There was an unsettling sweetness to the odor.)

@chicago bureau: Like Proust’s madeline? If you want to revisit that, take a drive through the industrial city of Vernon, just SE of downtown Los Angeles. Farmer John hot dogs are made there.

@chicago bureau: I admit – I thought Oscar Mayer was not a real person, like Mrs. Paul or the Gorton’s fisherman.

@chicago bureau: Ah, I studied law in delightful Camden, NJ, just across the street from the plant where they made Campbells Soup, each day, a different soup, and a different aroma.

@chicago bureau: @Dodgerblue: Thank you both for sharing about the dead flesh smell. Now I have to go and lie down and read some more of Homosexuality and Civilization to get my mind off it.

@blogenfreude: Betty Crocker’s next, then Aunt Jemima. These things come in threes.

It was the scent of death, silly!

Cincinnati, I-75 from Dayton (and Toledo):

Alcohol plant (Jim Beam? It escapes me while being well-known in them parts) just off the highway.

Speaking of weiners, Chevy is so desperate that they’re using go go boys to market Camaros to teh Gheyz.

I’ll buy anything attached to a Go-Go Boy.

Dixie cups and Crayolas here. No smells, but a lot of boredom

@redmanlaw: I helped put up farmworker housing in Hereford, TX. Nothing like the smell of feedlots in the morning…

Oh jeez, there’s a Hostess factory that I pass by regularly, and there’s nothing quite so sickly-foul as the aroma of Twinkie preparation. Yecch.

@IanJ:
I worked at one as an industrial temp (university days) cleaning the baking pans (job paid well, for a temp job, but I quickly learned why.)

@IanJ: There’s a hot dog stand on the first floor of my office building…pig parts boiling in water. Quintuple ugh.

@SanFranLefty: Y’all come on down to the L.A. ports. Nothing like the smell of crude oil and diesel exhaust to get you going in the morning. Specifically, going somewhere else.

@ManchuCandidate: Is it true, people just jump on the rim of industrial mixers and take a shit in the batter for fun at those big bakeries?

@ManchuCandidate: I had a work study job at a med school communications department that documented people coming in for autopsies at the Office of the Medical Investigator. I quit helping with that task when I saw my first (and only) full body burn victim.

@redmanlaw: There isn’t anything like a burn wound. I played with an oboe player whose day gig was physical therapist at a childrens burn hospital. That’s someone with a will of steel. Can you imagine?

@FlyingChainSaw:
I don’t know about that, but I’m pretty sure the odd rat I saw did.

on a more fragrant note: I used to drive the NY thruway westbound between
Albany and Buffalo. At that time, as one enjoyed the view of the Mohawk River to the right, suddenly aromas of fresh roasted nuts and sweet flavors
expanded and swirled. The Beech factory, housed in an attractive fin de siecle building, purveyed Beech Nut chewing gum, a mildly spicy alternative to the Wrigley array of quickly-exhausted flavor-bearers. It was the second time, I think, when driving past, Supertramp’s Goodbye, Stranger
with one of rock’s finest guitar solos enriched the moment.

@FlyingChainSaw: My first wife was an awful woman, a complete shrew, always angry, nasty, I was only there because I had such cripplingly low self-esteem at that point in my life that I would fall in love with any woman who would so much as speak to me, let alone touch my pee pee.

But early on in our relationship there was an incident that made me respect her, and see that even assholes have hearts, it involved a burn victim.

We were out at our local hangout bar, we were young, we hung with a crowd we knew there. And this one night, there was this guy who wound up sitting next to her. A serious burn victim, bad, and it seemed recent, I get the impression he was out with some friends, who were taking him out for his first time out after the incident, after a year or two of hospitalization and surgery. He was bad. It hurt your soul to look at him, it hurt mine, I just immediately was overcome with sadness and sympathy and empathy and horror, all combined, I wanted to cry. And of course thats the very worst reaction. His ears were gone, his nose was a bad reconstruction, he had no hair, wore a baseball cap, he smelled, god help me, you notice, of medicines and whatever he had to put on his wounds. His eyelids were reconstructed.

But the very thing that made my ex-wife unpleasant, a certain callousness, a lack of empathy, allowed her to react to him exactly the same way she would react to anyone else. And she did feel for him too, but without the extreme reaction someone who feels deep empathy would, and she struck up a conversation, and was soon laughing with him and slapping him on the back like there wasn’t anything out of the ordinary about him at all.

I could not have done it, I wanted to fall on the floor at his feet weeping for the tragedy that had befallen him and the sadness and injustice of the world, filled with imagining of his pain and the horror of being someone most people would react to with horror, and as I said, thats the worst reaction, from his perspective, possible.

Its the best thing I ever saw her do, the best thing about her, I stayed with her some years longer out of admiration for what she did that night, though I should not have, it was just wrong, she and I.