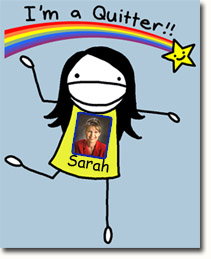 Did you know that everyone’s favorite metaphor for the self-destruction of the Republican party, Sarah Palin, isn’t exactly tops when it comes to finishing things she started? You probably suspected as much when she quit the governorship last week, explaining that doing anything else would mean she was a quitter (Huh?!?! WTF?!?!?) But yeah, Palin has a habit of leaving the crayons all over the playroom table without finishing her picture and leaving it to the other kids to clean up her mess.  The blog Swing State Project, for instance, notes that Sarah Palin quit the last thing she was doing before she was governess :

One other thought about Alaska that just about everyone in the tradmed seems to be missing. Sarah Palin did have a job in between being mayor of Wasilla and Alaska Governor: she was chair of Frank Murkowski’s Oil and Gas Commission. How long was she on this Commission? Less than a year… until she quit in January 2004 with a big public huff (leaving the Commission in the lurch with only one member), saying “the experience was taking the ‘oomph’ out of her passion for government service and she decided to quit rather than becoming bitter.”

And the Daily Kos adds:

Don’t forget that she also quit four different colleges en route to getting a degree in journalism. It seems that the one lesson Sarah Palin’s learned her whole life is that quitters always win.

A slimmer, more annoying and feminine version of Cartman’s “Screw you guys, I’m taking my ball and I’m going home.”

OMG, the GOP is fucked. Accoring to this article, Palin’s resignation actually made her more popular with the GOP base, and 70% of them would vote for her in 2012 if she ran for President. Meanwhile, among all other demographics her standing took a hit.

As before noted, I – Sally Kerns – have been banned from Team Sarah for pointing out that she is an ignorant, incompetent fool. I will now try to rejoin as Mavis Sludge. Pray for me.

@Serolf Divad: Then she needs to just form her own party from the real conservative base, the Fuck Me Jesus and Pass the Ammo Party, and the as yet unintegrated neonazies, militiamen and klansmen. Then she can have rallies the way the RNC would never allow her to during the 2008 campaign. Sarah and Chuck Norris shouting, “white power! jesus power! fire power!” over the roar of the crowd and firing bursts of automatic weapons fire over their disciples heads. Yes, it will be glorious.

@Benedick: Join as Gloria M. Stein – see if they pick up on it.

@FlyingChainSaw: I think that’s exactly where she’s going. This a good reason to keep Guantanamo open.

Hehehe. Henceforth I shall call you Mavis, because it is just that funny.

But she’s an interesting gal. She was a lifelong Dem but refused to vote for Obama on account of the whole Empty Suit issue. And she’s glad now that she didn’t now that he’s leading the country to ruin and socialism. She most admires Sarah because she’s so darn gutsy and refuses to play by anyone’s rules but her own and she’s working hard to make her presidency a reality because it is what America needs. On a personal note, Mavis is hoping she can get back down to 200 lbs one of these days. She and her husband Chuck have three wonderful children; Chip, Chuck Jr and Beryl, named for Mavis’s mum.

@Dodgerblue: It was striking how undisturbed she was by people at rallies screaming for blood. Jesus, lady, peace and general welfare, that’s the gig. You got people howling like animals, like, it’s not good, OK? McCain, a disturbed character at best, at least recognized that this kind of shit is dangerous and wrong but acted way too late. He rode the GOP bus to hell and, when he had a chance, and some authority, during the 2000 primary campaign he knelt rather than turn and face the crazies and call them out for the dupes they were – and condemn the manipulators in the RNC that would cultivate their insanity for their own profit. By 2008, it was over and he got to enjoy the wages of his cowardice. A lot of Palin’s language is resonant with jesucrazy theology and the posture of victimization is a precipitate of that evangelical movement’s narrative framework: they are the last few, ready to be finally brought up into heaven during the rapture. If she is really crazy, she’ll hook up with the Constitution Party and try to posit it as an alternative to the ‘lost, secular, socialist’ GOP.

@Benedick: Except when Jay Leno says it. Not even “Mavis” is funny then.

Couple of thoughts for the day on beautiful bright AK morn:”You have to sacrifice to win. That’s my philosophy in 6 words.”- George Allen. &

Today,try this: “Act in accordance to your conscience -risk- by pursuing larger vision in opposition to popular, powerful pressure”-unknown

Quitting isn’t everything. It’s the only thing.

@Tommmcatt Floats: In downtown Toledo. He is also active in the Rotarians and coaches little-league baseball. Chuck is behind the idea of a Palin presidency %110. He hates socialized medicine with every fiber of his being and recently bought a howitzer so that he can more effectively defend his family’s freedom. He is known at Team Sarah as upchuck because he believes in personal responsibility and the power of positive thinking.

Ah, Benedick, this thing is true,
Some days I wish that I were you,
With all those things you’ve never seen,
I think about what might have been:

To sit never through Leno’s dreck!
Or never have endured Glen Beck!
Or ne-ver to have engaged in sport!
This is a life that I support.

So pity me, it’s sad but true,
With the things that you don’t do,
Your life is better through and through,
And makes me wish that I were you.

I think I like this rationale. I quit my job a couple of weeks ago so I should be governor of Arizona in the next couple of years. Hot damn!

@Tommmcatt Floats: Wow. I am impressed.

@Tommmcatt Floats: I have a tear in my eye.

However, I may have misled you: I have taken part in Sport. Fencing (aka poncing about), jumping and running. However I gave it all up as soon as possible so that I might more perfectly know how to make jazz hands.

@Tommmcatt Floats: You should be CEO of Disney.

@FlyingChainSaw: She is talking in code the way that Hitler did and and Pat Buchanan does.

@FlyingChainSaw: It’s now finally reaching the heathens that “If I die, I die” is from Esther.

@Dodgerblue: Right but Buchanan knows what he is doing. She may just believe her own rap and end up leading a white power party.

@nojo: Esther. I thought that was Sophia Petrillo.

@FlyingChainSaw: Yup. Someone today called the Esther line a “dog whistle,” but that presumes intentionality — that she was deliberately speaking in code. Far from it. (Do we “speak in code” when we drop Python references?)

And between the resignation and the teabaggers, there was plenty of talk of third parties, since they’re no fans of the GOP leadership.

Parties. Plural. This could get really fun.

@nojo: I go for days speaking entirely in Simpsons’ dialogue, and its completely unintentional.

Thanks! Doggerel verse comes easy to me, for some reason.

@Dodgerblue: Those whom the Gods would destroy, they first make an executive at the mouse.

@FlyingChainSaw: . . .and those who are 1/4 or less Alaskan Native.

@redmanlaw: Yes, I never understood the nuances of her commentary about her trained mute’s native lineage, figuring it was so Alaskan and therefore so inside baseball I could never get it without living there for 50 years. Now, watching the beast at work for a year I think it was another hamfisted attempt to look folksie. I am sure he’ll forget all that stuff as soon as she tells him she is going to organize the skinheads.

@FlyingChainSaw: Some racists don’t mind Indians, like people who don’t like Hispanics but think Indians are cool (including some in the “progressive” community here).

@Tommmcatt Floats: When I was in private practice and did some studio-side entertainment industry work, word was “don’t fuck with the Mouse.”

@Dodgerblue: I should get that on a shirt for Son of RML, whose nickname is “Mouse”.

Oh yeah. It is a vicious, medieval culture over here.