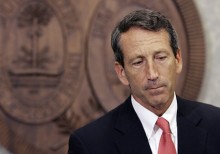 South Carolina’s senior Senator believes that Gov. Mark Sanford’s future as Governor will be resolved in the next week. However, Sen. Jim DeMint stopped short of predicting Sanford would resign.

“Obviously I’m concerned of whether or not he is in a position that he can continue to lead the state and a number of us are talking to him quietly and hopefully it will be resolved,” said DeMint, during an appearance on Fox and Friends Wednesday morning.

“I think I’m going to stay out of predicting but I think we will see some resolution in the next week,” DeMint told Fox News’ Steve Doocy.

This could be more fun than the Kristol/Schmidt dustup.

Wednesday’s Washington Post reports, “With every word South Carolina Gov. Mark Sanford (R) utters about his extramarital affair, his would-be successor [André Bauer] leaps closer to a job that he wants dearly but that many leaders in the state’s fractured Republican Party have been scheming to keep from him.”

Long knives baby.  Click through and read about Bauer’s run-ins with the law. Just the sort of Republican you want running your state.

GOP Sen: Sanford’s Political Future Will Be Resolved in Next Week [Raw Story]

Sanford should appoint Maria Supreme Poom Tango and hold press conferences every day asking the state to kiss his ass.

@FlyingChainSaw: I totally agree. And he should demand that DeMint debate him as to whether DeMint has ever had sex in his lifetime.

Outrage of the Day (for SFL): California Edition.

Looking over at our latest poll, I realize that Random Orbit Sander would be a great name for Palin’s next kid.

@Dodgerblue: Mr DeMint, you condemn me but have you, verily, could you, take the searing heat of sex with an Argentinean fuck-beast cougar and live to tell the tale, hear her howl your name and tear the hair from your back as she thrashes in soul-crushing ecstasy beneath you? No? You do have a dick, don’t you?

@blogenfreude: Please, honey, my blood pressure. You don’t want me stroking out in three countries, to quote baked.

More on Gov. Foot-in-mouth, from the AP:

South Carolina Gov. Mark Sanford has backed out of a promise to release personal financial records proving he did not use state money for trips to see his mistress.
A day after Sanford declared in an emotional Associated Press interview that his mistress is his soul mate, spokesman Joel Sawyer says the governor does not want to discuss personal matters in the media anymore.

The last sentence should end with “on the advice of his attorney.”

Every time I hear the phrase “the Cubby Culbertsons of the world” I throw up a little in my mouth.

97 is a good run. They don’t make guys like him anymore.

@Mistress Cynica: I indicated last week that I didn’t have much schadenfreude and even felt a little sorry for Sanford. Now? Fuck the moran–I hope the wife Skilsaws both his wallet and his balls.

@flippin eck: I felt unusual (for me) stirrings of sympathy for him at first, but every time he opened his mouth these unfamiliar and uncomfortable feelings subsided a little more, until he completely crushed them with that “soul mate” crap. Apparently his “digging holes” hobby includes not only heavy equipment on the plantation but also e-mails and statements to the press.

@Mistress Cynica: Speaking of horndogitis, our mayor here in L.A. is boffing another TV reporter whose job it is to “cover” him.

@Dodgerblue: Is that reporter #2 or #3? Still, I don’t think Tony V. has topped Mayor McDreamy in the skeeviness of forgetting the adage of “Bros before Hos” in boffing his campaign manager/chief of staff’s (drunk and cokehead) wife.

Speaking of Mayor McDreamy, he got a big steaming welcome to his new home.

Movement: San Francisco Mayor Gavin Newsom and his wife, Jennifer Siebel Newsom, finally moved into their new home in the upper Haight over the weekend – only to have someone promptly defecate and urinate on their doorstep. Welcome to the neighborhood, Gav!

@SanFranLefty: And people say San Franciscans are losing their sense of style!!

I think this is reporter/boffee no. 2 for this election cycle. When he won election to the City Council, he disappeared for a few days with someone who I think was a campaign staffer. His long-suffering wife got over that one but not over reporter/boffee no. 1. He also has a couple of “illegitimate” children by persons other than his now-ex-wife. So I’d say his schlong matches up with your boy’s pretty well.

The homophobes in San Francisco are a tormented, hardened lot. I bet it was one of them.

I’m sorry but this headline keeps making me think of a childhood jingle. Most of which I can’t remember but the final lines go (sung to the tune of British Grenadier) –

… But of all the vile contagions
There’s none that can compare,
To the drip drip drip
Of the syphilitic prick
Of a British Grenadier.

@Benedick: It’s things like this that make me love the English.

@Tommmcatt Floats: Nah, it’s probably one of the demented homeless guys down the hill in the Haight, or one of his enemies on the Board of Supes. Went by his place on the way home from the gym tonight, the shitstain has been hosed off the front step.

I blame my parents.

wouldn’t it be great if he Josh Marshall was right and in the end, La Soulmate dumps Sanford within a month of him moving down there?

@Jamie Sommers: JEEEEE-Zuss, Sanford must shut up. She was an awesome cougar schtupping a young dude on the side – does anyone honestly think she’d be able to handle Mark’s whining about excavators and pulsating sand for more than 15 minutes? He will no longer have his marital AmEx with him which needless to say could affect any sane woman’s tolerance.

@SanFranLefty: @Jamie Sommers: Someone needs to explain to Mark the difference between “interview with the AP” and “session with your shrink.” Jenny’s shredding his black AmEx card as we speak, and Maria Maria is starting to freak out about crazy stalker guy who was kind of a fun fling but is taking this waaaaay too seriously.

Speaking as a former adolescent, I would be looking for the earliest opportunity to tell one of the kids that his dad is pussy-whipped.