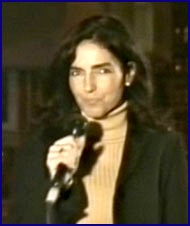 Turn’s out that Mark Sanford’s lover was also a cougar, and that was her undoing:

BUENOS AIRES — The mystery of who revealed Gov. Mark Sanford’s e-mail messages may finally be solved. A business associate of Mr. Sanford’s Argentine mistress said Friday that private messages between the two lovers had been sent anonymously to a South Carolina newspaper last December by an Argentine man the mistress had briefly dated.

Last December, the executive said, Ms. Chapur was dating a young Argentine a few months after her affair with Mr. Sanford began. The man happened to see the e-mail messages being exchanged between the governor and Ms. Chapur, said the executive — who said he had direct knowledge of the situation — and hacked into her e-mail account to see the rest.

Infuriated, the man sent the messages to The State, the newspaper in South Carolina’s capital, Columbia.

In one of the published messages, dated July 9, 2008, Ms. Chapur wrote Mr. Sanford that she had seen another man.

“He is a very nice guy, great heart,” she wrote, “but unfortunately I am not in love with him. You are my love. Something hard to believe even for myself as it’s also a kind of impossible love, not only because of distance but situation.”

Argentine Man is Said to be Source of Sanford Email [NYT]

This just affirms my earlier comment as well as one I started and deleted that no good would have come from Sanford’s infatuation with La Chalupa. Latina women are no more inclined to monogamy than are latino men, especially when there is substantial distance – and the ability to still attract young guys – involved.

ADD: she looks remarkably similar to my friend the Spanish Anonymous Foreign Election Observer, except for the Frida Kahlo brow.

@Nabisco: She’s since tamed the eyebrows a bit.

@blogenfreude: And taken a Sharpie to them.

The homsekshual agenda live and well in Ess Eff – giant pink triangle unveiled on Twin Peaks. Our rainbow flag is flying on the deck. Look for clips of the Sisters of Perpetual Indulgence and Dykes on Bikes on Sunday night’s Fox News round ups of the debauchery going on here this weekend. Who knows, maybe an AWOL closeted Republican politician will get outed at a Castro bathhouse this weekend…

@SanFranLefty: You just haaaad to rub it in ;) Atlanta’s homofest is scheduled for October this year due to the fascists at the Piedmont Park Conservancy, who will allow a Paul McCartney concert on the lawn to raise money for them, but not the faggots who’ve been using the park since 1970, every end of June.

Between this and missing July 4 due to surgery, I feel so left out.

This is epically good.

My favorite part of this email was:

Damn Kos, damn his hatemail, and damn his polls.

Speaking as a Pro Forma Socialist, of course.

@nojo: My favorite was “you, sir, are a illegal immigrant. i dont give two shits whether you are an american citizen or not:”

@blogenfreude: If he was trying to be offensive, I’m not impressed.

@FlyingChainSaw: Yeah, we do much better work here even on an off day.

“no proof, just science and that makes it true for you liberals”

@blogenfreude: I don’t know what is best, “Pro forma socialist”, “homo enabler” or this “you leftofascists want to repel the second amendent”.

Because after all, we are after all socialist fucksticks.

ADD: @blogenfreude: Hmm. Don’t get me wrong, speaking as I am from just this side of half a century, but Maria seems to have frizzled a bit post-9/11. Is that what happens to you when you take up with a hypocritical loner evangelical Sowcarolinian?

This person should not be allowed to use the term “fuckstick.” Its one of my favorite insane stringcursing curses, it was taught me by my father, it means a lot to me, and seeing a stupid fuckstick like that use the term offends me.

I like her better with the eyebrows. There’s a fierceness to her.

@Promnight: Yes, she’s much more impressive to me as a ball-cutting angst-ridden Frieda Kahlo with the fierce unibrow. With the sharpie-marker brows (thank you Benedict for forever putting that image in my head) she looks like she can’t decide between being a “Real Housewives of New Jersey” or a LA County Women’s Jail chola.

FINALLY! Thanks, I’ll have to add that to the page.