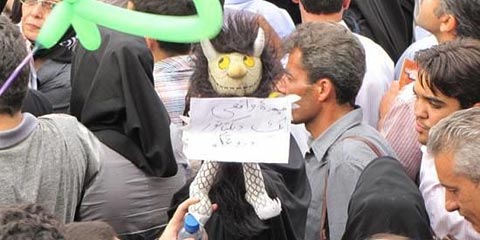 Tehran is a half-day ahead of Stinque HQ in San Diego. By the time this is posted Friday morning, it will be late Friday afternoon there. The Supreme Leader will already have spoken. What he will say, and the consequences of what he says, are both unknowable at the time of writing.

So let’s take a look at something that’s been nagging us all week: Tehran is not eleven hours ahead of our time — it’s eleven and-a-half. Why?

Modern coordinated timekeeping didn’t become necessary until late in the nineteenth century. Until then, if you traveled from town to town, “local time” was really local, usually based on solar high noon. And until the telegraph came along — shall we now call it a precursor to Twitter? — there was no practical means of coordinating time anyway.

But why even go the trouble? Trains.

If you’re running a network of rails, the only way to make them run “on time” is if you control time itself. And so “railroad time” was standardized across the United States in 1883 — stemming from a proposal by Canadian Sanford Fleming, of all people — followed by Greenwich Mean Time the next year, established by international convention. After that, generations of kids enjoyed wonderful old-school world maps with clocks designating each zone.

So why the Tehran Half? Revolutionary prerogative? Anti-Western protest?

Turns out they’re not alone. India and Afghanistan also use “offset” time zones, as well as Newfoundland, Labrador, and parts of Australia. For that matter, Nepal and Chatham Island in New Zealand use a quarter-hour offset.

Time flies, alas, and we finally gave up looking for the reason behind Iran’s offset. But at least Venezuela satisfies our need for Revolutionary Time: Hugo Chavez decreed their half-hour offset in 2007.

Basically the Dear Leader, or whatever the fuck he’s called, blamed us, Zionists, and a host of other evildoers for his problems. Utter douchebaggery.

Adding: this is helpful:

Waves Canada City flag and will have a lunch of Kraft Dinner (Mac and Cheese to you heathens) in honor of Sanford Fleming.

Outside the trains don’t run on time.

@ManchuCandidate: Throw me down the stairs my cigarettes, eh?

@blogenfreude: I actually stayed up to watch the speech (leaving the post as is). Still collecting my thoughts, but they’re no different than anything you’ll read elsewhere today.

We’re in a very dark moment. Violent crackdown is imminent, perhaps as early as Saturday’s rally. And if the guns and tanks are unleashed, civil war begins.

Unless Khamenei blinks. But as the politicos like to say, he’s doubled down.

@Jebediah: No, but I’m immediately hooked by the World’s Toughest Milkman.