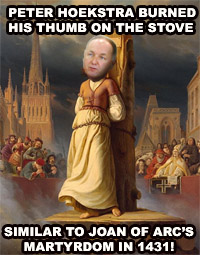 You know that guy don’t you? You know who I’m talking about. The guy who, no matter what the conversation, finds a way to make it all about him.  You can be all “So I took my car in to the shop for a regular maintenance and the mechanic is telling me I need new pads, rotors and wheel bearings and it’s going to cost me $1200!” And this guy instantly replies “Oh, that’s nothing. Last fall my car was hit by a meteor and erupted into a ball of flame.” Then later your other friend is like “My daughter is so sad because our dog ran away two days ago and he still hasn’t turned up.” And this guy doesn’t bat an eyelid before responding: “That’s nothing, back in ’92 one of my cats was eaten by an alligator.” So no matter what the conversation, he tries to one-up you with an anecdote of his own.

Well, GOP rep. Peter Hoekstra revealed himself to be just such a guy recently when he remarked on Twitter:

“Iranian twitter activity similar to what we did in House last year when Republicans were shut down in the House.”

Not long after, Crooks and Liars Logan Murphy observed that the best part of Hoekstra’s tweet were the commenst that users added after, comments such as:

Crupuscular: @petehoekstra I stubbed my toe earlier, which is just like being beaten half to death by Basij.
jwzich: @petehoekstra Didn’t have breakfast this morning, it was exactly like the Great Potato Famine
ttauchi: @petehoekstra Gave my 5yo a time-out; now she knows what her great-grandparents went thru in the WWII Japanese -American internment camps.
ericspiegelman: @petehoekstra A bug flew into my popsicle. Just like 9/11.
dbentley: To @petehoekstra: I saw an empty building today. now I know what it’s like to live in Michigan.
politigal1: @petehoekstra I won a dance competition once; I know what it feels like to be Mikhail Baryshnikov. #GOPFails

And now the tweet has become a full blown meme, with one purpose built blog collecting comments from users accross the world. So, why not join in the fun?
Serolf Divad
3:53 pm • Thursday • June 18, 2009
comment »
Choose Your Delusion
Wow Get Your Popcorn Ready
25 Comments
blogenfreude

And here I was thinking that Twitter was completely useless. In fact it’s an endless supply of stupid.

I once played paintball so I know what it’s exactly like to be in combat.

I once had a one-night-stand with an Asian dude so I remember the ‘nam, bro.

@Tommmcatt doesn’t mind if he doesn’t make the scene: Your new name is Tropic Thunder, dude.

I ride a motorcycle to work sometimes, so I’m pretty sure I could beat Rossi if I had to.

I had a letter to Rolling Stone published when I was 17, so Cameron Crowe’s “Almost Famous” is pretty much all about me.

The baklava at lunch was stale, subjecting me to more Muslim-inflicted pain than the entire Armenian genocide. I demand Anatolia as compensation.

Pulling the bagel out of the toaster oven this morning, I burned my finger, so I understand what my Jewish forefathers went through in the Shoah.

As well as Shadrach, Meshach, and Abednego.

@FlyingChainSaw: Next time take the cannoli.

I got a paper cut this morning. Now I know how it feels to have a leg amputated without anesthesia.

ADD: As Morrissey sings in my head: “Now I know how Joan of Arc felt / as the flames rose to her Roman nose / and her hearing aid started to melt.”

Where is Martin Luther Queen?

That guy, thats me! The only cure is weed, it makes me listen intently, and find everyone fascinating, and laugh at all their jokes, till near the point of asphyxiation. Do they have a patch or something that can just deliver it constantly?

Just to threadjack, Walter Cronkite, 92, the time comes for everyone.

My greatest brush with fame, I was in Manhattan visiting the museums, and my wife and I went into the Mayflower hotel, just off Columbus circle, to have a beer at the bar, and who walks in and sits next to us, but Walter Cronkite and his wife. There was noone else there, and we started chatting, before I knew who he was. His wife was charming, she told us a story, I have an actual anecdote given to me by Mrs. Cronkite, she told a story of a time they were sailing, and they heard people on the shore yelling “hello Walter,” and then they ran aground, it turned out they were yelling “low water.” Thats what she said, anyway.

@Promnight: You just made me cry and frantically search for stories. Walter Cronkite is the reason I studied journalism in college. He is my role model in so many ways. Relieved to see he is still on our earth, but sad to see he’s about to go.

@Promnight: That’s not the way it is quite yet. Newsday reports that’s the story’s been making the rounds for a few days, he’s definitely in bad shape, but while CBS has been collecting memorials, it may not be time to start lighting candles.

@nojo: St Francis candle at Chez Lefty is lit almost evert night for the furry and humans around us, and tonight is lit for Walter C.

But really, who remembers Uncle Walter, and who cares about Iran? The real news is that Jon & Kate are breaking up Monday.

@Promnight: @SanFranLefty: I too gasped “oh, no” and teared up. Uncle Walter was the fantasy father figure of my childhood, who told us about bad things but made us feel like somehow things would be OK. I’ve never really been able to tolerate network evening news with anyone else. He was the walking definition of “gravitas.”

@nojo: Yes, the freaks will grab the headlines, while the Senate passes some half-assed excuse for health care with no government-run plan as an option. Sure, require me to buy crap health insurance that costs the world but won’t cover anything. If that makes you feel better.
It’s SO lucky I’m not bitter.

@Original Andrew: Does it mean I’m a super-goy because when I read, “Shadrach, Meshach, and Abednego” I can only think of the Beastie Boys?

@Mistress Cynica: @Promnight: @SanFranLefty: I didn’t cry when I read that, but when they show him taking off his glasses and wiping his eyes, I’ll fucking lose it.