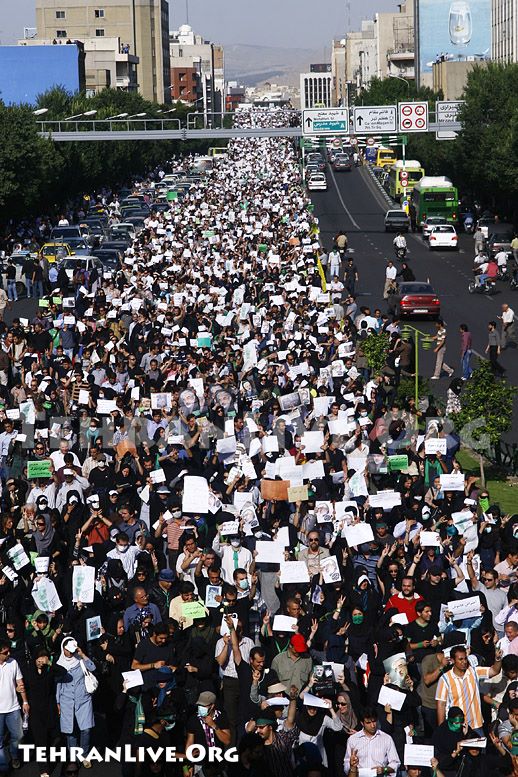 The numbers at today’s rally are hard to gauge, but our correspondent Saeed Kamali Dehghan, reckons there could be as many as one million people there. …

He said the demonstration is bigger than Monday’s rally. Many are wearing black and carrying photos of those who died. Some are carry placards calling for a new election not a recount. The shops on the route are closed in support of the rally, he added.

And just in case you thought the GOP might be getting its act together:

Normally this would be a post, but today is not a normal day – remember that Fox douchebag who ran down a cyclist in Central Park? Arrested last week.

The fact that Iranian state media — if they decide to carry it — will say that some congressman from Indianohiowa is trying to install an American puppet makes me somewhat less than concerned about the presser. If you need to track down a map to find out where a guy lives, chances are his level of pull is just about nil.

@blogenfreude: He punched someone and they kept him on? I mean, you don’t want people who resort to yelling to be in a workplace much less someone who’s proven himself violent. Should Stinque.com interview this guy? Ask him if he is looking forward to going ot jail and having neonazi serial killers kick him to death?

@chicago bureau: OT – Heard on NPR that the Olympic Comm. kept the Chicago delegation an extra 15 minutes and was very interested. You may be screwed.

@blogenfreude: That’s probably the 15 min in which Richard II reneged on his long-standing promise not to make Chicago taxpayers responsible for cost overruns…not that there’ll be any overrun obvs…or maybe it involved BJs too..15 minutes is a long time.

Why is there TV coverage for Republican stupidity on parade?

@flippin eck:
Folks in Vancouver are getting really ansy about 2010.

The one good thing, Canada City’s Joke to the world, Mel Lastman, ever did was bungle the 2008 Olympics bid (not that we had a chance against Beijing.)

From the NIAC blog:

By now, most people have heard about the six Iranian soccer players who wore green arm bands in yesterday’s game with S. Korea. But what you may not know is that the team is always accompanied by an “ethics official” who did not approve the green arm bands, and the players were forced to remove the armbands at half time. Multiple twitter reports say the official has already sent a report to officials in Iran about the players’ conduct.

Also from NIAC. We know the regime has brought in supporters to beef up the counter-demonstrations, and there was that classic Photoshop Crowd the other day, but they’re definitely making a show of it on Friday:

Through contacts in Iran we have heard people are being bused and brought into Tehran for Friday prayers. They have closed down some streets and have made others one way to help with the constant flow of traffic coming into Tehran. There is much confusion whether or not to protest tomorrow is an especially sacred day as prayers are led by Supreme Leader Khamenei.

Notable: Even Iran government TV is calling todays numbers “hundreds of thousands.” I’ve been wary about crowd counts this week, but if both sides agree, it’s good enough for me.

Passing thought: Satellite photos? I can see my patio shrubs in Google Earth.

From NYT’s Lede blog. The Assembly of Experts has the formal authority to replace the Supreme Leader, but as a practical matter, it’s not something you undertake lightly — that’s why Rafsanjani is presumed to be counting votes and otherwise maneuvering behind the scenes right now.

For that matter, we also have to presume the Revolutionary Guard has an implicit vote — if they’re not behind you or standing aside, good fucking luck. But here’s more than we knew before:

The analysts say about a third of the Assembly members are loyal to Mr. Rafsanjani. Of the other members, perhaps a quarter are considered loyal to Ayatollah Mesbah Yazdi, a mentor to Mr. Ahmadinejad and a staunchly conservative figure who has suggested that allowing the public a voice in elections serves only to sully God’s laws. The rest are viewed as independents who could vote either way.

@nojo: …Ayatollah Mesbah Yazdi, a mentor to Mr. Ahmadinejad and a staunchly conservative figure who has suggested that allowing the public a voice in elections serves only to sully God’s laws.

The Antonin Scalia of the council?

@Nabisco: Without being glib, and with appropriate caveats, it’s really not that hard to cross-map the politics. Fundies here drool for the power fundies there exercise.

So the other day I use “slap fight” in passing to point out differences between titular and military power. And now via Nico at HuffPo, this report from Iran’s parliament:

After Ansari, Abutorabi took the floor again and continued questioning the plainclothes security forces once again. At this point Hosseinian, Koochakzadeh, and resaee, the three biggest supporters of Ahmadinejad in the parliament, started a verbal argument which ended with a number of physical fights. As a result a number of pro and anti Ahmadinejad members of the parliament join the fight and start slapping and pushing each other.

Some day we will have evolved to where all our differences can be resolved via pie fights.

@nojo: The Iranians should take lessons from the Koreans – they’re the best I’ve ever seen at political bitchslappery.

@blogenfreude: Oh wait – I forgot about the Taiwanese legislature.

I covered some demonstrations back on the Navajo reservation in the late 80s where people were killed in several months of upheaval arising from allegations of corruption by the tribal chairman that also triggered hearings by the Senate Indian Affairs Committee and governmental reform that resulted in a much stronger tribal council as a check on the chairman’s office. The chairman was prosecuted by the feds and went to prison for several years.

The capitol of Window Rock was on edge. Cops with AR-15s lined the rooftops of the council chambers. Concrete barriers on the road to the chambers and the famous Window Rock itself slowed traffic to a crawl. Old Navajo men and women in shawls, cowboy hats and jean jackets filled the chambers and grounds with the “revolutionaries” as the pro-chairman and pro-reform factions debated the reform of government. It was an exciting time to be there. The reformers I know who remained out in the grassroots areas still have the fire from 20 years ago, while now the council can’t raid the treasury fast enough for trips to Vegas, throwing fistfulls of discretionary cash to the local communities and tribal employees, and worse of all, ordering custom gold rings for themselves.

@redmanlaw: And the cult of Peter MacDonald still lives….

@Jamie Sommers: Older people remember him fondly for the progress the Navajo’s experienced in the late 60s and 70s, but one wonders how much in the way of (the limited amount of ) electrification and other infrastructure development, school construction, improvements in health care (such as they were), and increased economic development (mainly mining), federal spending and tribal self-determination would have occurred without him. It could be argued that McDonald was a beneficiary of societal progress and increased attention to Indian affairs and not the cause of it on the Navajo Nation, at least.

WSJ, via NYT’s Lede. The pipsqueak puppet is back from checking out retirement dachas in Russia:

Mr. Ahmadinejad released a largely conciliatory recorded statement on state television Thursday, distancing himself from his past criticism of protesters he has compared to angry soccer fans and “dust.”

“I only addressed those who made riot, set fires and attacked people,” the statement said. “Every single Iranian is valuable. The government is at everyone’s service. We like everyone.”

Which brings us back to legitimacy: At this moment, the only person in power without publicly acknowledged formal authority is Mini-Me. Look both ways before crossing the street, Mahmoud — that approaching bus may have your name on it.