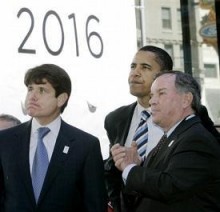 As mentioned in a thread earlier today: Richard M. Daley, Mayor — whilst promoting the Chicago 2016 Olympic bid — kited a check.  A really big one.

Faced with losing the 2016 Summer Games to competing cities offering full government guarantees, Mayor Richard Daley made an about-face Wednesday and said the City of Chicago would sign a contract agreeing to take full financial responsibility for the Games.  In a worst-case situation, such as severe cost-overruns or a catastrophic event, the agreement could leave taxpayers on the hook for hundreds of millions of dollars or even more, a scenario Chicago’s bid team acknowledges but insists is far-fetched.

Far-fetched my ass.  This is Chicago.  There will be “cost-overruns.”  (These are referred to, in other parts of the world, as “kickbacks.”)  Everybody knows this.  And so the City Council — recently burned on a parking meter privatization deal that Rich pushed through and has since gone horribly, horribly wrong — wants another look.

Now: the reigning World Champion of Hope is going to Denmark in October when the final vote is taken.  If Chicago wins, it shows Barry’s power and influence.  If the bid fails, then it will be taken as a sign of the bloom coming off his rose.  And, in fact, the outcome could have nothing to do with Barry, and everything to do with purely local politics — pressure on the City to use money for other things (like, oh, I don’t know, schools), anger over sudden increases in taxes and fees at precisely the wrong moment, corruption and graft and patronage and on and on.

The intricacies of all of this could fill a book.  As could the bullshit.  This is going to be fun.

Ugh. I hope we get eliminated from contention before October. If Obama really dedicates any time and energy to this I need to further question my Obamatard-ness.

If you want to fuck things up for your Olympic bid then you’ve got to hire Mel Lastman, the ex Toronto mayor and doofus extraordinaire.

Sample of his awesome work:
“What the hell do I want to go to a place like Mombasa?… I’m sort of scared about going out there, but the wife is really nervous. I just see myself in a pot of boiling water with all these natives dancing around me.” The remarks sparked a firestorm of controversy, with much speculation that they would offend African IOC members and endanger Toronto’s bid.

Didn’t do much as China already had “won” the IOC.

In January, 2002, Lastman was ridiculed for greeting and shaking hands with members of the Hells Angels motorcycle gang when they held a convention in Toronto. Lastman later claimed that he didn’t know that the Hells Angels were involved in selling illegal drugs.

I was in the area when it happened. I missed witnessing the infamous handshake by 5 minutes. The mayor lacked, uh, a certain worldliness (and reading skills as Montreal was rocked a year earlier by biker gang wars which was national news.)

During the 2003 SARS (Severe Acute Respiratory Syndrome) crisis, Lastman did an interview on CNN. When he was asked what the World Health Organization was doing about the crisis, Lastman replied “They don’t know what they’re talking about. I don’t know who this group is. I’ve never heard of them before.”

Made a pledge of no new taxes and fucked Toronto’s finances for a long time.

Some directly cut and paste from Wiki. Others from memory.

In a worst-case situation, such as severe cost-overruns

Also known as “business as usual.”

I want my Olympics where god intended them to be: on television.