Stick to the Granny Slots, Harry 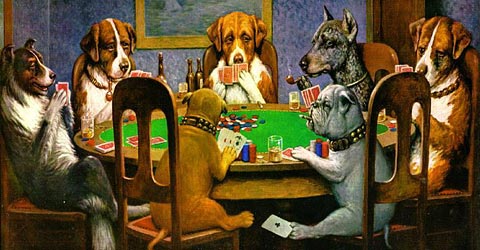 We’re fascinated by this exchange from a press conference today, where Harry Reid, Senator from the Great State of Lost Wages, cashes out on Guantanamo:

REID: Can’t put them in prison unless you release them.

QUESTION: Sir, are you going to clarify that a little bit? …

REID: I can’t make it any more clear than the statement I have given to you. We will never allow terrorists to be released in the United States.

For cowardice in the face of transparent bluffing — for folding ’em when he should be holding ’em — Harry wins our inaugural Kenny Rogers Award.

Reid: Guantanamo Detainees Should Not Be Held In U.S. Prisons [Think Progress]

Some cowpokes in Montana are willing to take the detainees – they got them a vacant jail. Harry?

Could someone please remind me WHY this idiot is majority leader?

Fucker’s just parroting the Limbaugh line on closing Gitmo. Fucking pathetic, the republicans are in total dissaray and imploding, and he is capitulating to this weak meme?

@Promnight: Cowardice, capitulating, craven — better stop with the c-words before I get into trouble.

But yes, Sen. Reid (D-Wuss) is not just giving in to a howler, he’s endorsing it by his actions. (Did Carmina Burana get to him?) And not just any howler — he grants that Gitmo holds “terrorists”, he breathes life into Gitmo as a recruiting tool for real terrorists, he signals Republicans that they can pick off the weak instead of dealing with Barry.

It’s not just a stupid move, it’s truly shameful. And now I understand for the first time how Republicans can win again: Idiot Democrats.

@nojo: The only explanation I can possibly imagine is that beltway dems are so living in the media bubble that they take the media repititions of the right wing echo chamber propaganda to be something that the general public actually believes. Does Reid think that because the out-of-it DC pundits are crediting this republican fable, it means that the public actually thinks this way? Or is there some detail I am not aware of, some proposal to send them all to a fed prison in Utah?

@Promnight: You’re on the right track. Democrats as a party are rancid, and if Barry hadn’t run as an outsider, we’d be answering to Establishment Demagogue President Swampsow right now.

Early in the campaign I got tired of Politico for its incessant War Room mentality, as if it was 1992 all over again. But it’s not just a high-profile political blog — everyone’s still stuck in the 90s, Democrats and Republicans alike. Barry really was a generational change, but that still leaves a lot of leftovers holding office.

So, to address your point: Beltway Dems have yet to learn the secret of their own leader, that you can safely ignore the bubble, rise above it. This issue should have been so easy to swat down, but clearly Senate Democrats lack the imagination and will to pick it apart.

We are well and truly fucked. Not that I should be surprised.

@nojo: Democrats have always been their own worst enemy.

I was thinking about Dems and Reps being stuck in the 90s today when I saw headlines on yahoo or google news that said the GOP was preparing to object to the as-yet-unknown Supreme Court nominee and that this unknown person is expected to dodge difficult questions. It’s all just theater for the stupid.

The rejection of swampsow and mcgeezer should have been a wake up call that Americans are tired of this shit. But I guess you can’t teach old dogs new tricks.

@Jamie Sommers: It’s all just theater for the stupid.

I may have to revise our slogan.

@Jamie Sommers: Or, short of that, the t-shirt list. Which is still going to happen, soon as clients stop throwing money at me.

But yes, Democrats are conditioned to a Pavlovian response, which goes all the way back to 1980. With rare exception, those in office now succeeded and thrived in that environment, and the problem goes much deeper than just teaching them new tricks: It’s who they are.

We’re just revisiting the disappointment of 2007, when they won Congress and didn’t do shit. And lo, when they discover their backbones now, it’s to oppose their own president.

Shorter version: All of DC is Cheney’s codependent.

@nojo: All of DC is Cheney’s codependent
Well, that seals it. I’m not going to get any sleep tonight.

One time I met a state rep from Tucson – a moderate Republican – and she said she thought her colleagues in the legislature were kinda like the characters in M*A*S*H, which was cute but not entirely accurate. I thought it was more like The Muppet Show: a show within a show filled with the crazy, the dumb, the egomaniacal and one sane frog. And in the balcony, a couple of jaded wiseasses laughing at the players’ expense. Here’s to all the Waldorfs and Statlers of the world.

@blogenfreude: I read about this place somewhere else. “It’s not just shovel ready, it’s turnkey.”. C’mon, we’re a nation of prisons, tell me these guys would have an edge up on the Mara Salvatrucha vatos?

@nojo: That’s the nut of the problem right there. Cheney is just smarter than the average legislator, he’s been studying the machinery of power for so long he knows how to work the room without giving a shit about what people think about him.

@Jamie Sommers: As a result of the inside the Beltway kabuki theatre on the next SCOTUS nominee, it pisses me off to no end that two early contenders who are both ridiculously qualified are pretty much off the table now in all the prognostications due to their sexuality and therefore according to Focus on the Family their inherent bias. Could you have imagined the howls if the libs had gone there and said that about Scalia or Roberts being Catholic?

@Nabisco: Arnie promised to release 38,000 prisoners if the ballot initiatives failed (which they did) so maybe the State of California could subcontract.

@Promnight, Lefty : As a cure for the inside the beltway mentality, I have long believed that Congress needs to get the hell out of DC and stay home as much as possible – do hearings and votes from local district offices. We have the technology.

@redmanlaw: We have the technology. Yes, but do we have the distractions necessary for proper legislative action outside the beltway, by which I mean of course young male pages, high end hookers and K street lobbyists.

Yes, if I had a vote here it would be for that. Brilliant.

@SanFranLefty: Thomas is Catholic, too. Oh, for the good old days when Catholics were as discriminated against in these situations as gays are now.

If only we could seat Frankin! Then we all could look forward to the day when spineless Dems fail to use their majority to end a Rethuglican filibuster of whoever gets nominated.

@Tommmcatt the Wet Sprocket: I second.

@SanFranLefty: And the other part of that kabuki ritual is keeping Napolitano’s name out there to make teh gheyz think there’s still one in the running even if she is allegedly on the down low. I highly doubt she’s being seriously considered.