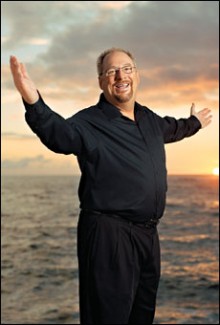 Rick Warren was supposed to go on the teevee this morning to explain his compulsive lying, but he chickened out:

Instead of explaining contradictory statements over his actions regarding California’s Prop 8 on same-sex marriage, Rick Warren went with Plan B today: he didn’t show up for a planned interview on ABC’s “This Week.”

Earlier, Pastor Rick had gone on Larry King and, when asked about Proposition 8 in California, said he didn’t have nuthin’ to do with it, didn’t advocate it, nuthin’.  But there’s a problem. Pam Spaulding at Pandagon:

Oh the joy of getting busted lying on international TV and having to do serious damage control. My post on Tuesday, ”Rick Warren lies about his homobigotry on Larry King Live,” was picked up by Huff Post and created a buzz for pointing out that on the man who delivered the invocation at the President’s inaugural, Rick Warren, the spiritual leader of Saddleback church, flat-out lied about his support for Prop 8.

Indeed he did.  Exhibit A:

WARREN [on Larry King]: During the whole Proposition 8 thing, I never once went to a meeting, never once issued a statement, never—never once even gave an endorsement in the two years Prop 8 was going.

WARREN: Here’s an interesting thing: there are about 2% of Americans are homosexual, gay, lesbian people. We should not let 2% of the population determine—to change a definition of marriage that has been supported by every single culture and every single religion for 5,000 years. This is not even just a Christian issue, it is a humanitarian and human issue, that God created marriage for the purpose of family, love and procreation. I urge you to support Proposition 8 and to pass that on.

Pam goes on to detail the hysterical spinning that Warren’s church is doing. Big win.  She ends with this:

As I said in my earlier post—will Rick Warren ever be held accountable for trying to rewrite his bigoted history? If he’s so confident about his position, why has he refused to debate it in public? Why did he try to back out of meeting with gay and lesbian families from Soulforce who were invited to his church? His attempts to weasel out from under his bigotry on live TV hardly represents integrity.

The peas are sprouting in my garden, there was a double yolk in my morning egg, and now this!! Thank you, Easter Bunny!

@Mistress Cynica: Fundies – the gift that keeps on giving.

A fine figure of a man.

Great, now everyone in the snakehandler crowd will interpret this as Rick’s surrender to homosexual marriage and the knives will come out for this sick freak. Now he’s claiming to save Rwanda. Will someone point a zombie at this guy, please?

@FlyingChainSaw: I’m sure there’s a obscure book of the Bible that needs zombification.