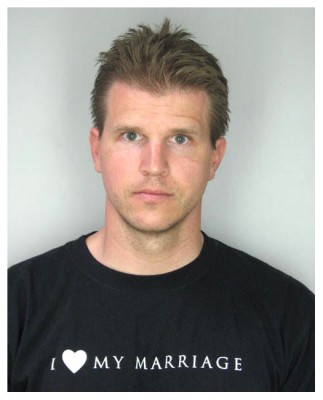 Another day, another compassionate conservative:

MARCH 16–A Florida man wearing an “I ♥ My Marriage” t-shirt was arrested last night for allegedly choking his wife during an argument in their Tampa-area home. Bradley Gellert, a 32-year-old financial consultant, was busted by Hillsborough County Sheriff’s Office deputies and booked into jail on a felony domestic battery by strangulation charge.

Would have been funny if Joe the Plumber had been wearing a McCain t-shirt when he beat up the missus.

According to a police report, Gellert, pictured in the below mug shot, got into an argument with his wife and “screamed at the victim and threw numerous items.” He then allegedly “grabbed the victim’s neck and strangled her,” which “prevented the victim from breathing normally.” Gellert’s wife subsequently fled the couple’s Apollo Beach home and went to a nearby sheriff’s office to report the incident. Investigators noted that the woman had been “taken to the ground by the arrestee and suffered an abrasion to her knee and red marks on her neck.”

And just in case you doubt this guy is a fundamentalist whackjob:

The “I ♥ My Marriage” shirt was a promotional item tied to the 2008 movie “Fireproof,” a Christian-themed film starring Kirk Cameron. The movie, a hit in evangelical circles, centers on a fireman’s religious awakening and his simultaneous effort to save a failing marriage.

Ladies and gentlemen, I give you organized religion at work.  Praise Jeebus!

Kirk Cameron? Crap, what’s he been doing for the last few decades?

Good lord Bloggie, could you have used a bigger picture? I haven’t seen bigger creepier eyes since Glenn Beck did his crazy eye close-up.

As a side note, I am sure the Stinque Fagz could teach this gentleman about the proper way to treat a lady.

/TJ: DO NOT, I repeat, DO NOT watch “Dear Zachary: A Letter to a Son About His Father” unless you want to be totally and completely mind fucked, pissed and depressed. ARGH!!!

Kirk Cameron: Jr wants me to say that “KC is like #3 on my list of people who need to STFU right behind Ann Coulter and Bill O’Reilly. Okay, wait, he’s #4, because Rush Limbaugh needs to STFU, too. KC is why people who peak on 80s sitcoms need to stay out of the spotlight — just step aside and let us move on.”

He loves his marriage; he just hates his wife.

Thank you! You’ve been a great audience. Be sure to tip the veal and try your waiter.

@Jamie Sommers is lovin’ the Jesuits today: See, I was gonna go with “I love my wife, it’s my marriage I can’t stand”. But first I was trying to figger out how you scooted ahead in Sport. C’mon, Dayton over the Mountaineers? Dayton? That’s only good for Kim Deal, Guided By Voices and Balkan peace agreements.

On the other hand, Robert Pollard was a high school b’ball star.

@Jamie Sommers is lovin’ the Jesuits today: He looks a lot like an assistant I had once, who was totally gay. I’m betting this guy is closeted and hatin’ his life. But that’s just my view – he could simply be a straight fundie with authority issues.

@Jamie Sommers is lovin’ the Jesuits today: Congrats on your current standing. You have the most ambitious Final Four picks (well, not counting Tommmcat’s, but those don’t count) and to that I salute you.

@blogenfreude: Mr. HF has volunteered to lead the re-education of this douchebag. He may not be gay now, but he probably will be when it is all over.

@Nabisco: Whoa, whoa, whoa. I was just two points behind “intelligent” choices a moment ago.

I didn’t know that Dayton was a Catholic school.

@SanFranLefty: I didn’t know either until I went to a trial practice seminar there a few years ago. Boring lil campus but probs not the school’s fault. Dayton is a boring town.

You really don’t want to know.

Mine may not have counted, but who lost first? Hmmmm?

Oh, hayellll noooooo. That is so fucking wrong on so many levels.

@Tommmcatt the Wet Sprocket: No honey, she is talking about that video of Kirk Cameron. Your bracket shit talking is totally acceptable.

I told you I was new at it.

Still beat you though.

@Jamie Sommers is lovin’ the Jesuits today: “Dayton is a boring fucking town”: that’s why such great garage bands have come from there.

More important – if BC wins this- I pull even with Lefty. heh… heh…

@Tommmcatt the Wet Sprocket: Interestingly, I agree with you 100%. In fact, I won’t even bother clicking on that video, the URL is enough to make me stay the FUCK away from that one…

@String Bikini Theory: keep an eye out for Hose Manikin, s/he may be gaining on ya as well.

@Jamie Sommers is lovin’ the Jesuits today: I commend you. Dayton had not shown up on my radar as being Jesuit.

@String Bikini Theory: University of $poiled Children are looking good. Utah, OTOH, is going to be my downfall. Fucking Mormons – why did I pick Utah and BYU?

@Nabisco:
He’s below the line. He doesn’t exist.

@SanFranLefty: Hey, I didn’t mean to pick Utah, that was a mistake. And BC absofuckinlutely is supposed to win. Ref? COMMISH?

@SanFranLefty: Mormons are like the anti-Jesuits when it comes to college basketball. They can almost always be counted upon to lose.

@Mistress Cynica: Yeah, this season has destroyed my theory about the 24 year old post-missionary players. I’m just glad to know for future reference that Dayton is a Jesuit school. Never would have guessed – I thought it was an Ohio state school.

@Nabisco:
Hee. I pick Usk to beat BC. Only one of the few oddball calls that actually panned out.

@ManchuCandidate: I picked upsets in all four 7-10 games without really realizing it. Three out of four ain’t bad.

I will curse Wake Forrest if those Muthafuckas lose tonight.

Shit, is all of March gonna be spammed by this incessant “bracketing” business? I tried to get an explanation of this at work and gave up when they showed me a chart that was infinitely less decipherable than the Rosetta Stone.

@homofascist: I’m gonna call this douchebag slightly hittable, with the proviso that he gets a better hairdo. And the t-shirt stays on for the hate-fuck.

@Pedonator: And the first week of April, too!

@Pedonator: Yes. it beats paying attention to the news.

@ManchuCandidate: They are a disgrace to NC and the ACC. I had the bastards going to the Sweet 16, too.

@Pedonator: The t-shirt totally stays on.

@Mistress Cynica: I actually did pick Cleveland St. And I am in like 4th place (well, tied for 4th).