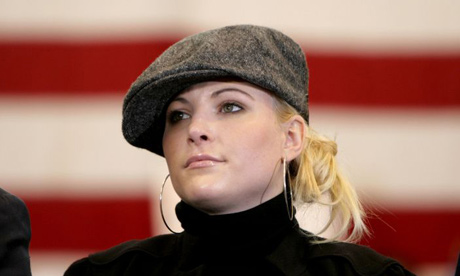 First it was Rush and Michael Steele, now it’s these two:

Writing about the spat with [Laura] Ingraham on her Daily Beast blog this weekend, [Meghan] McCain wrote that “instead of intellectually debating our ideological differences about the future of the Republican Party, Ingraham resorted to making fun of my age and weight.” “At this point, I have more respect for Ann Coulter than I do for Laura Ingraham because at least Coulter didn’t come back at me with heartless, substance-less attacks about my weight,” wrote McCain.

Ingraham fired back while McCain was appearing on The View.

While the show was airing, Ingraham responded on her radio show. “I think Meghan McCain is a delightful, lovely person,” she said. “But now Megan is so thin skinned and the lovelies on The View are so in search of material.” Ingraham continued to mock McCain with a Valley-girl voice, and she added that McCain needs to “lighten up”.

It’s fun watching them fly into bits.  I’ll say it again – all the GOP has left are sociopaths, the home-schooled, and the clinically insane.

I think it instructive to note that no-one involved in this is talking about ideas. It is all about who is delivering the message or the style in which the message is being communicated.

It’s the Republican Party in a nutshell.

@Tommmcatt: It’s What Your Right Arm Is For!:
Good point. Better to argue about asses than dealing with building useful policies.

For the first time since Schism II, I miss Megan. I’m sure she’d be happy to tear Ingraham a new one.

It can’t get any lamer. Maybe if Rush started shouting, “Megan! Show us your tits!” on his radio show.

@nojo: And may I say that, although Meghan is insane (she’s still a Republican), she is certainly not fat.

Is that Britney Spears?

blogenfreude: Excuse me, but apart from the whole “Republican, daughter of The Geezer and Crazy Beer Lady” thing? I’d hit it.

Seriously, guys: there have been people who have opened their rice-cake holes about Kate Winslet being fat. Her marriage notwithstanding, if there was an offer on the table, the offer would be humbly accepted before the sentence was even finished.

@FlyingChainSaw: When’s Laura Ingraham going to go after Rush for being fat?

@chicago bureau and blogenfreude: If Meghan McCain is fat, then I am morbidly obese.

@SanFranLefty: He’s a man, silly. They’re allowed to be slugs, unless they’re ghey.
Why go after Meghan for being “fat”, which she isn’t, when one can legitimately attack her horrendous fashion choices? (Juicy Couture? Really?) If we’re gonna put style over substance, do it right.

@SanFranLefty: Fat? The guy’s a total eclipse of the sun.

@FlyingChainSaw:
I thought Rush had moons orbiting around him.

@FlyingChainSaw: Jesus Christ, you just gave me the ear worm of that horrific early ’80s song “Total Eclipse of the Heart” – thanks a lot!

@chicago bureau: I read the item and thought, “Huh? Where did Ingram get this idea?” The whole twisted business of starving women to death is really deeply violent stuff. It is really disturbing to hear an allegedly educated women hurl this kind of vile abuse. I get the sense the GOP is just hostile to normal, healthy women. Their female thought leaders look like they’re straight out of a concentration camp, about as snuggy as tarantulas. The de facto leader of the party is allegedly a homosexual pederast and has ground through 3 or 4 women he posed as ‘wives’.

@ManchuCandidate: Flies that grew from the maggots that live in his mouth and the decaying flesh around his ass and gut.

@chicago bureau: Dude, I’m not Teh Ghey but if La Winslet put the offer on my table, it’d be humbly accepted. She’s fucking awesome and I don’t even like blondes.

@Ewalda: Oh, they are particularly hostile to women. Its half their agenda, “family values” means “Patriarchal values,” the man is king, he controls all the women in his family, particularly their sexual activity. Thus abstinence, no divorce, no birth control, no abortions, anti-everything that empowers women, pro-everything that keeps women subservient. Apparently, they desire a world in which they are free to go off and assume a wide stance in cruisy restrooms, pay dudes to blow them, wear multiple wetsuits, hire prostitutes for diaper-play and three ways, and then come home and demand dinner.

The other half of the agenda is keeping the darkies under control.

Thats about all they have.

@Mistress Cynica: You mean Winslet and Mirren, I assume?