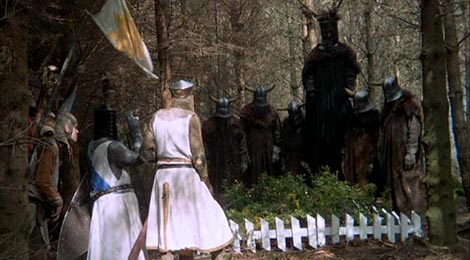 Five beers into the Oscars — the opening dance number had that effect on us — we realized we hadn’t thought about the Monday morning post, and we couldn’t concentrate enough to study RML’s tip about the Canadian terrorist threat.

Not when we were additionally addled to see George Bush still in the news. No, not the George Bush who’s applying as a greeter at Elliott’s Hardware in Houston. And not Poppy, either, who tried retail work but was thwarted by the scanners.

Please, sit down. Clear your desk of sharp objects. Because there’s a third George Bush. And he’s gonna be around a long time.

George P., son of Jeb — you might remember him as a Little Brown One — is only 32, and already mastering the Asshat Arts as a lawyer and real-estate developer. And as a Texas native and resident, he’s seen fit to go after — Charlie Crist?

To be fair, Pee (we shit you not) was in Florida for the Young Republican National Federation confab when he called Crist “D Light” on Saturday. The D is for Democrat, and apparently Crist is not enough of a jerk for Pee’s taste. Something about Crist’s recent appearance with Barry, and not wanting to starve his electorate to keep Rush happy.

Pee’s own political future remains uncertain. “I want to obtain success in my own right,” he says. “I want people to look at a record of accomplishment that I’ve put together in my own right and not based on family name.” Ownership of the Texas Rangers is pending.

nojo
7:00 am • Monday • February 23, 2009
comment »
Choose Your Delusion
Keep Those Speeches Short, Or Else The End of Wingnut Welfare?
18 Comments
ManchuCandidate

Not a good day news media, print or ‘tubes.

Gawker kills Defamer. I wonder how relieved W (the blog) is these days to escape Denton.

Piss-boy would have to admit, however, that his own father got a $4.5 million dollar personal bail in the early 1990s out when the FDIC received the assets of a Flordia S&L Jeb and a business partner were looting for loans on dodgy commercial developments in S. Florida.

@ManchuCandidate: Right and none of this has anything to do with the fact that the papers have been bought and sold like trading cards. Wasn’t this Philly holding company once owned by Knight Ridder? This was one of the papers that McClatchy didn’t want? Ended up being bought by investors with other people’s money, people who need to be paid off? The Inquirer did some great stuff once. Best of those guys ended up drifting to the Baltimore Sun when it became clearer KR was getting out of the business of discovering and publishing newsworthy information. The papers would be fine if they weren’t being bought by shitheads who don’t know anything about running a newspaper and then whine they’re not making 30% returns, like they’re owed that margin. Like this Zell fuckwit who bought the Tribune papers.

P will be a stellar member of the Bush Crime Family – how about a little breaking and entering?

@FlyingChainSaw:
Exactly. Same kind of mentality that assumes if one has an MBA one can manage ANY company even if one lacks experience in the company’s business.

@blogenfreude: Which one got busted for parking lot bonin’?

ManchuCandidate: Homofascist made an incursion into Denton Central to blast Nick. Oddly enough, I am ambivalent about Defamer, given my addiction to Sport and whatnot.

Oh, and P ain’t gonna do shit in government. You think anybody in this country of ours has any stomach for Bush III? The coffee and cookies have been served and enjoyed by all guests. And now it is time for the Bushes to go.

@ManchuCandidate: Oh, shit, yes. Fastest way to sort the true, cuff-chewing moron from the incompetent twit in a mismanaged department/division’s executive ranks is to look for the MBA after their names. Nothing has been so damaging to the business management disciplines as the belief that there is a generic set of skill sets that can be applied to any industry and, end of day, hey, any business is just a pile of numbers. How many MBA’s do you think advised Zell in his scam to take over Tribune, leveraging its own ESOP? Fucking thing will end up a basket case, bankrupt, Zell complaining about the fucking commie fucking reporters and their commie fucking editors, papers will be closed, surviving employees carrying 4X the load of those laid off. All these papers, most perfectly able enterprises on their own, will be zombified by insane obligations and traumatized by the bankruptcy process. And, in all this, no one probably would have told Zell big-city newspapering is hard and modestly to strongly profitable in good years but who knows now that Craigslist has blown a hole in the classifieds and that the subway giveaways have taken a big bite of the display ad rate card. A big part of the MBA crowd that consult really are just wreckers who know how to asset strip, dismember divisions for resale and isolate intellectual property, basically to prepare companies for brokerage and sale by making their books look purdy. They’re not business consultants or industrial expert. They’re just pre-liquidity event mercenaries.

@FlyingChainSaw:
It explains the ruins of my current employer.

We hired a Jack Welch acolyte with an MBA cut from the same mold as Nardelli who brought in all his MBA toadies and he dove us straight into Chapter 11.

They’ve been telling us
a) Did not see the credit crunch happening
b) Not my fault
c) We now know what we are doing.
d) No restructuring plan, yet

What makes me laugh a lot is that our geniuz Dear Leader wanted to buy a whole bunch of companies with cash we did not have. If he had actually done his M&A plan as per the wishes of Wall St, we would have been fucked even worse and probably finished by Sept 08.

@ManchuCandidate: Right, leverage every last cent, even if you’re leveraging it for borrowing and debt service. One of the nice things about being involved in non-profits is just banking money because it’s a normal part of enterprise. Just in non-profit land you can always hold up the primacy of continuity as trumping other interests.

Good to see these captains of industry taking responsibility, eh? Here’s what you can shout back, preferably with a pitchfork raised over your head.

a) anyone within 100 miles of a mortgage broker or actually any professional in or near real estate knew the entire game was runaway scam by 2001.
b) should be shot
c) never did. surfed an anomalous situation
d) deer in headlights

Nojo, did you write something like this before? Maybe on the CP last year during the Oscars? Oh wait, you weren’t writing for the CP back then.

Fuck y’all, I just had the craziest deja vu reading this article. Combined with the optic migraine creating lots of dancing, simmering lights, I am thinking I may have accidentally slipped some LSD in my English Breakfast this morning.

@homofascist: For all I know, I’ve used the Knights before, but I try to be extra careful around Python references. There are only so many, and you don’t want to exhaust them all at once.

@nojo: It wasn’t even the picture – I swear I had read those first four paragraphs before. The “clear your desk of sharp objects” was particularly resonant.

The human brain is a tricksy thing.

@homofascist, nojo: There was “He’s Not Dead, He’s Resting”, “The Onion Throws Deep into Python Territory”, “When We Get Bitter, We Cling to Monty Python” from September 2008; and, the art for “Unanswered Prayers (June 24, 2008), all from the Unbearable Hamster of Being, just off the top of my head.

@redmanlaw: One of us frightens me.

Raising my son right. He knows what the Holy Hand Grenade of Antioch is.

@redmanlaw: Happened to watch Holy Grail again Saturday night, which put it all front-of-mind. I love the carping on the commentaries, with Cleese bitching about handsome shots that have nothing to do with the comedy. Bad Zoot! Bad, bad Zoot!