It’s a Dessert Topping AND a Floor Wax! 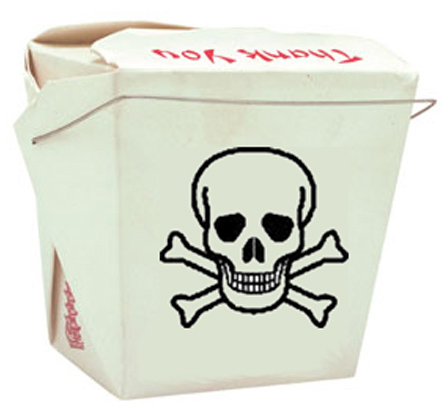 I bitched about outsourcing shit to India here and here, so today it’s China’s turn:

Gary Leong knew things weren’t right during a recent tour of a Chinese plant when he witnessed workers manufacturing glucosamine sulfate to relieve joint discomfort in the morning and fertilizer to help plants grow in the afternoon – using the same equipment.

Not only do my joints feel great, I’ve grown 2 inches!

Charged with guaranteeing the purity and safety of the company’s vitamins, but also facing competitors that offer them at a lower price thanks to cheaper raw materials, Leong brought Jamieson auditors to China to see if sourcing directly from China was a viable option.

Jamieson is just one of hundreds of businesses that produce natural health products and processed foods facing this choice.

I’m glad the fucking Canadians are paying attention to this, because the Bush administration sure isn’t.

After observing the operations at the glucosamine sulfate/fertilizer factory, the Jamieson executive visited an ascorbic acid plant, one of four in China responsible for 90 per cent of the world’s supply of vitamin C found in processed foods and natural-health products.

“Basically, they’re letting economic choices rather than quality or integrity factors determine when they use it. And that’s a minor indication, but it’s indicative of the whole problem over there.”

Jamieson has opted to pay more for raw ingredients rather than buy them directly from Chinese plants, citing the absence of a culture of accountability.

Time to go through the medicine cabinet.

It’s not like China’s contaminating their water supply with heavy metals from recycling western crap computers or anything.

That is why I don’t mind paying the extra $20 bucks to get my worn out computer equipment recycled from a company here in Canada City than a cheaper one who just ships to China.

I’ve heard that Miracle Whip is only one chemical away from being panty-hose.

@Dodgerblue: They’d have poisoned him too.

But is it kosher?

I just checked the Centrum vitamins that I take. The bottle says “made in the USA.” Does that tell us anything about the origin of the chemicals they use?

@Dodgerblue: Uh-oh — my cheap off-brand sez distributed by Kroger. I think we know what that means.

@Dodgerblue: It means the label “Made in USA” was printed on was printed in the USA. Likely the paper and ink were made in China. The bottle and vitamins were all made in Chinese slave labor camps.

Is anyone watching Blago? He’s blowing apart in spectacular fashion. He’s rambling about hospitals, cancer, legislation, Rahm Emnauel, whatever he can latch onto.

Question for Chicago Bureau: is it that you like those big butts, or is your city in mass training to be power forwards in the WNBA — check out this from today’s Science News: “Researchers from Loyola University Health System and other centers compared African American women in metropolitan Chicago with women in rural Nigeria. On average, the Chicago women weighed 184 pounds and the Nigerian women weighed 127 pounds.”

@FlyingChainSaw: This could explain my craving for Chinese food. I wonder if I’m addicted to melamine.

Here I am on a Friday afternoon. I’ve shut off my work computer and deciding where to go eat when what do I see on my TV?

@ManchuCandidate: If you want to really say “WTF?”, then check out the cast listing for An American Carol at IMDb: Kelsey Grammer, Bill O’Reilly, John Voight and Dennis Hopper all in the same movie. Plus Chriss Anglin as JFK. Definitely a film to miss.

…the absence of a culture of accountability…

Yeah, those Chinese really need to crack down.

In other news, I hear there’s a great investment opportunity in US treasury bills…