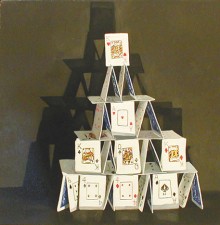 The contract jobs I work on have been outsourced in part, mostly to India.  That’s why this warms my cynical black heart:

NEW DELHI — Satyam Computer Services, a leading Indian outsourcing company that serves more than a third of the Fortune 500 companies, significantly inflated its earnings and assets for years, the chairman and co-founder said Wednesday, roiling Indian stock markets and throwing the industry into turmoil.

The chairman, Ramalinga Raju, resigned after revealing that he had systematically falsified accounts as the company expanded from a handful of employees into a back office giant with a work force of 53,000 and operations in 66 countries.

Mr. Raju said Wednesday that 50.4 billion rupees, or $1.04 billion, of the 53.6 billion rupees in cash and bank loans the company listed in assets for its second quarter, which ended in September, were nonexistent.

The size and scope of the fraud raises questions about regulatory oversight in India and beyond. In addition to India, Satyam has been listed on the New York Stock Exchange since 2001, and on Euronext since January of 2008. The company has been audited by PricewaterhouseCoopers since its listing on the New York Stock exchange.

The scandal raised questions over accounting standards in India as a whole, as observers asked whether similar problems might lie buried elsewhere. The risk premium for Indian companies will rise in investors’ eyes, said Nilesh Jasani, India strategist at Credit Suisse.

R.K. Gupta, managing director at Taurus Asset Management in New Delhi, told Reuters: “If a company’s chairman himself says they built fictitious assets, who do you believe here?” The fraud has “put a question mark on the entire corporate governance system in India,” he said. [emphasis supplied]

Am I a bad person for enjoying this so much?

And what do you think Stinquers – what’s the next industry/fund/company that will be shown to be a house of cards?  And where?  Europe? China? Iceland?

Steve in Manhattan
1:00 pm • Wednesday • January 7, 2009
comment »
Choose Your Delusion
Paris is Burning A Bailout You Can Get Behind
25 Comments
Jamie Sommers

TJ: Mommy No. 1 is on the Dennis Prager show right now!

Worked with one guy on a couple of start-ups and he left a very good C-level gig at a US-company founded and run by Indian guys that issued a press for a product that wasn’t even in design. He told the CEO you can’t do that because it is a crime and the CEO replied that he knew that but he needed it to create an apparent position in a market space of interest to a suitor who’d already expressed interest in the company – and who ultimately did buy them some time after my colleague walked. Working at another company where he’d picked up a project, he found comments fields in code that indicated that the code was retreaded from a project for another company and related tales of crappy Indian code from colleagues all over the Valley. Cheap can get experience real fast. Whenever I have influence on contracting programming or development help, I keep it at home or send it to a group in Russia that I’ve had good experience with. India’s fortunes as a technology center had a lot to do with the rise of the dotcom madness and, I fear, that sector learned the worst of US business habits.

@FlyingChainSaw: Is it so wrong to say that I’m glad that other countries are feeling the pain here, or are at least learning the lessons they need to (or not, as in America’s case)?

And what do you think Stinquers – what’s the next industry/fund/company that will be shown to be a house of cards?

What, you mean the whole thing isn’t a sham?

My “current” employer deals with these guys.

Not bad programmers, but we had a lot of headaches with code, too, as compared to in house.

My guess as to who is next? My cousins in China. Crap like this is why I keep telling my pro China dad that China isn’t the miracle he thinks it is. Everyone keeps telling me how smart they are, and knowing lots of smart educated Chinese I agree, but not Chinese organizations. The Chicoms were the authors of the clusterfucks known as the “Great leap Forward” and “Cultural Revolution” and have a long history of cockups and fudging that cost the Chinese dearly.

@FlyingChainSaw:
I don’t think they needed to learn from us morans in the West.

I’m deeply suspicious of Hoyle, the very definition of house of cards.

@ManchuCandidate: Outsourcer in India had to compile list of all names in some documents. Among their finds: “Christmas, Merry”.

blogenfreude: As fuckwits go, Joedaplumba is yesterday’s news. Jesse White must have seen the Stinque Awards and said to himself, “Self, I want that award this year.” Per Politico:

The Illinois Secretary of State, Jesse White, downplayed his own role in preventing Roland Burris from joining the Senate, and put the responsibility for not seating Roland Burris on the shoulders of Senate Majority Leader Harry Reid. He also said he hopes Burris is seated.

So you refuse to certify the appointment, which causes Harry Reid to say no, but Harry Reid says if there is a certificate then everything will be dandy, which leads you to say that you want to have Burris seated and it is Reid’s fault that he isn’t when you insisted on principle that you would not certify the pick.

Whenever I look at my driver’s license from now on, I shall feel shame. And not because my photo is for shit. (Srsly: looks like I have 20 volts running through me. Not a good look.)

Hold on, I just saw this, having skipped the name before:

“Satyam” means “truth” in Sanskrit, according to Wikipedia. Irony not being Ramalamadingdong’s long suit. This shows that Friedman was right: the world is flat, as far as financial fraud is concerned. My candidate for next industry to swirl toiletwards: tie, between the Chinese and Russian banking systems.

China. The earthquake revealed that their concrete is made of sand, and I think the metaphor applies to everything else. There have already been cracks in it (widespread piracy, melanin and poison in food, etc.) but I think the dam will burst this year or next.

Friedman has his next friggin book already written, @Dodge. Why should we have a corner on lack-of-moral-compass department? Share the wealthgreed, sez I!

@SanFranLefty: Just hope it is not the Three Gorges dam.

@Dodgerblue: The ironies do pile themselves high, don’t they.

It’s basic economics: They have a product that’s becoming exponentially more expensive each year, which everyone needs but fewer and fewer people can afford. Combine that with our employer-based system that drops benefits for millions of people who are out of work, who then–in addition to being unemployed–get bankrupted by astronomical medical bills. Fewer working people paying premiums mean that the insurance companies are forced to raise rates for everyone else, yadda yadda yadda.

Mark my words… in the near future, the HMO/insurance co. CEOs will be in front of Congress ordering them to give them a trillion dollars or they’ll close all the hospitals. And that they can go suck themselves if they dare to ask how the money will be spent.

@chicago bureau: I’m beginning to think Jesse White and Harry Reid are one and the same person.

The Bush Years in Statistics: Then and Now

@chicago bureau: It is nice to see the Dems getting off to a fine start. Usually takes them a few weeks to work up to a total clusterfuck.

@IanJ: Someone just pointed that out to me … I may have to post it.

Harry Reid will bravely say “no,” then slip them $10 billion the next day no questions asked.

Looks like Reid has already folded on Burris. Jeebus, has it even been like four hours? A new record. That man is a mafuckin’ human jellyfish.