Stinque
Home Latest Comments Log in
If it smells, we’re on it.
Stinque
Mastodon: @stinque@mas.to
BastardWatch 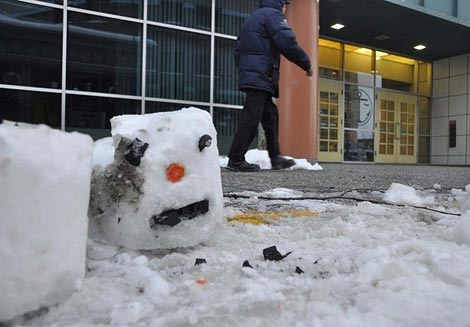 Bristol’s bastard is now a week late, and the relation of the Devirgin Birth to local supernatural events can no longer be easily dismissed.

First the Talibunny Tabernacle spontaneously combusted. Then the 25-foot pagan god Snowzilla mysteriously appeared in Anchorage. And now an army of Snowzilla’s zombie offspring have surrounded Anchorage City Hall, demanding the sacrifice of the Golden Grandchild else they pelt passersby with coal.

Or maybe it has something to do with the city’s vicious smears against the adorable frosty heathen:

They held picket signs with messages like “Heck no we won’t go,” and “Snowzilla needs a bailout.” “Snowpeople have rights,” read another….

By Friday morning, remains of the protesters lay in frozen pieces beside the heated sidewalk — a mess of twig arms and coal buttons.

Jackbooted government thugs may have won this round against Snowzilla’s ice army. But until that baby drops, Anchorage will know no peace.

You need to clarify that it is a week late from the announced due date, not the actual due date.

@SanFranLefty: Exactly. With each day that passes without a full term infant snowbilly, the Talibunny’s tale of cross country birthin’ grows weaker and weaker.

@SanFranLefty: For a moment I thought they were going to cut her open on Christmas, just for the publicity.

@SanFranLefty: Remember, that first baby can come at any time — it’s the others that take 9 months. Of course, this is usually used to explain an 8 lb 7 -month “preemie.”
@nojo: I just want the spawn’s scalp checked closely for the “666.”

@Mistress Cynica: That would’ve been a preemie for my cousin — her last one was a shade under 11 pounds.

@Mistress Cynica: Pregnancy scares the living shit out of me. I get freaked, thinking what it must be like, there it is in you, you feel it getting bigger every day, kicking and squirming, and you know there is only one way for it to get out. And its getting bigger and bigger, and there is still this very small opening its supposed to get out through. Yikes! Its a mightmare.

@Promnight: Why do you think scheduled C-sections are so popular?

@Promnight: I’ve never been pregnant, in no small part because I share your fears. I don’t want to get my cuticles trimmed without anesthetic. Mr Cyn’s ex gave birth to their 11 lb son at home, attended by midwives. I’m completely in awe of her.

Double yikes! My kids were each around the 9lb mark and I thought that was historic.

fucking A! Ms. Nabisco and Ex-o-Mr.Cyn deserve fucking medals for doing that. And in Ms. Nabisco’s case, twice!! Hurrah to Ms. ‘Bisco!

As for me and Mr. SFL, I have a bad ticker that can barely support me and my lifestyle. No parasitic fetus could live off of it without killing both of us. Let alone a fetus that grows to be 9 pounds. And even if I found a 9 pound fetus on a street corner in SF or Bangkok, we can’t support it unless we moved to Kansas City and went to work for Halliburton or an oil company. Seriously, I don’t understand how people can afford kids these days, but maybe because I live somewhere where day care is $1500/mo. and the only people who have kids are super rich or super poor.

@Promnight:
nightmare is the word.
when i had my only baby, dinosaurs were still roaming.
i had no anesthesia (a very young girl having a text book perfect pregnancy and labor kept drugs from me) i screamed like a banshee to no avail.
years later i went to a new ob/gyn. the nurse working there was in attendance at my labor and delivery. she said they talked about me for months. the dr. patted my hand and told me he knows how i feel. HAH!
swear: i grabbed him by the throat and told him i didn’t care if he delivered a thousand babies–“you DO NOT know how i feel !!!!!!

yes lefty, i have one baby because that’s all a single hard working/studying mom with a brain in her head can manage.

@Jamie Sommers:
agreed. the entire story is utter bullshit.
part of me hopes the bunny’s bunny bun arrives at the proper time to dispell their myth. AND that bunny stays on the national stage.
her entire family makes billy carter look aristocratic.

Heated sidewalks? Paid for no doubt by those dollars Ted Stevens hijacks from my state and others. I just love paying for perks for a bunch of frozen hillbillies.