Fine, But Leave the Slides at Home 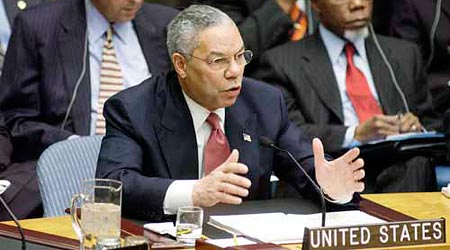 There was a moment when if Colin Powell had endorsed Barack Obama, it might have made a difference. This isn’t it. Especially not after he endorsed Ted Stevens last week. But if it changes the subject from Talibunny’s SNL appearance, we won’t complain.

A character witness for Ted Stevens? Yeah, thanks, but don’t need that kind of endorsement. Way to go, Colin!

Oh, and P.S.: YOU DON’T KNOW ANYTHING ABOUT TED STEVENS’ CRIMINAL TRIAL? Have you been living under a rock? I remind you that you’re under oath, Mr. Powell.

Is it okay that he drives up in one of the Mobile Chem labs then?

You know what Colin? Drive up in whatever you want. Bring those slides, too.

TJ/
Just watching a bit of Mad Men before off for a badly needed morning run.

After sitting through a lecture on Mutual Assured Destruction and MIRV warheads and then having the choice between having dinner with Pete Campbell or going round the bend by running off for some hedonistic sex with a 21 year old hottie–it would be no choice. Dinner and sex with the hottie.

Of course, I say this as a single man not as a Don Draper wannabe Cad (big difference.)

@ManchuCandidate: But would you stay once you found out the dude who pimped the aforementioned hottie is her dad? That creeped me the fuck out.

@Bionic Bee-yotch:
No. I wouldn’t run out screaming, but internally I’d be.

How can a show be both creepy and uplifting at the same time?

@ManchuCandidate: It’s always nice to see someone who’s more fucked up than one.

@ManchuCandidate: Who is that woman, the original Mrs. Draper? That’s one of the most intriguing character twists I’ve seen in quite some time. So many obvious melodramatic ways to play it, but instead they make her understanding and forgiving. And happy.

But not a pushover. The lady knows what she’s about. I want to see what they do with her, and I hope they don’t fuck it up.

Re: SNL – didn’t it seem like Palin toned down her accent for the show (based on the 12 words she uttered on the two clips I saw at TPM or someplace)? Others have said that video from Alaska shows that her accent was not quite so extreme then.

@redmanlaw: I was impressed with her ability to assume human form, and didn’t really notice her voice.

@nojo:
Neither do I know where she came from. I didn’t realize she had only one leg until near the end. Also interesting is that Don does not try to screw her.

@Mistress Cynica:
I really felt sorry for Joan. Mr Surgeon dude is a controlling psychopath than anything. That scene definitely left me real cold.

@ManchuCandidate: I nearly threw up because I’ve lived that scene, and it was exactly like that– just staring at something until it was over. I got my roses the next day. Still can’t stand red roses.