Too Angry To Blog 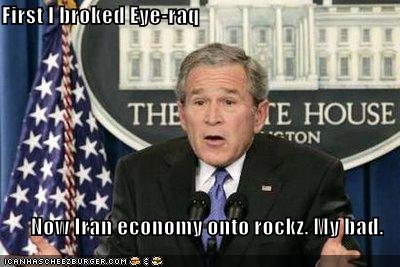 As you can see, I have nothing.  If I cat-blog tomorrow, just shoot me.

Remember how FDR told Americans, “The only thing we have to fear is fear itself”? When people are afraid most of us gravitate to someone who isn’t afraid, someone who helps us calm our own fears. Sen. Obama is sending this message every day, and especially during the debates. Life will go on. We aren’t in a Mad Max style apocalypse that will force us all to live in filth and speak with Aussie accents.

Obama’s cool demeanor is driving the “Be AFRAID of everything!” crowd absolutely bonkers. I think that’s why we’re seeing the outpouring of venom at the McCain events because Obama refuses to be terrified of all the possibilities that petrify the Bush base. These people literally have no common ground with Obama – he’s well informed and they’re not, he’s articulate and they’re not, and worst of all he’s fearless and they’re not.

This is what happens when the star of the short bus gets elected student body president.

Please tell me the grammar mistake in the headline was on purpose. Oh, you think you’re too angry? No, allow me to let you get more angry.

Here is my outrage of the evening – the ghettoization/Hortonization of Barack Obama:

Someone who “used cocaine.” “A guy of the street.” That’s how McCain co-chair and early endorser Oklahoma Gov. Tom Keating said Senator Barack Obama should describe himself as a way to “be honest” with voters. He was just about to launch into a Rev. Wright riff Thursday, but his radio host Dennis Miller said they had to go to commercial.

“A guy of the street.” “This is some sort of reference to ghetto culture, black America,” Taylor said.

“Used cocaine.” Obama admitted this in his memoir, so why bring it up here? “It’s amazing how people want to have it both ways with Obama,” Taylor said. “They say he’s both this elite, Harvard-educated arugula-eater — and he’s some crackhead thug on the street.”

“This is happening because McCain is down in the polls. So (his supporters) are going to call him the n-word without saying it,” Taylor said.

Taylor said “black Americans are watching this moment right now. If these attacks are perceived to be responsible for some harm coming to Obama or that he were to lose the election after being so far up in the polls, there will be some serious reaction in this country,” Taylor said. “There will be a quitting of America by some African Americans. I don’t know if there will be violence, but there will be a tremendous amount of disappointment.”

Here’s the quote and what follows below is a link to the audio:

Keating said Obama “ought to admit, “you know, I’ve got to be honest with you. I was a guy of the street. I was way to the left. I used cocaine. I voted liberally, but I’m back at the center.” I mean, I understand the big picture of America. But he hasn’t done that…”

Listen to it here.

@Dave H: Dear God, not Australian accents! At least spare us that.

@AARPrick: Have you been working out?

@SanFranLefty: I’m now living in hope he goes all the way and calls Barry the c-word next Weds. Also: why does Palin dress like a stripper? Any thoughts? The dress she wore at the ‘debate’ was so damn tight I’m sure she couldn’t have climbed a flight of stairs.

@SanFranLefty: Mistake was not on purpose … I am truly exhausted. By all of it. OTOH, I am surprised that the PG campaign is letting anyone named Keating speak on their behalf.

@redmanlaw: Yeah, baby! The world may be imploding, but as long as we have baseball, all is right with the world. Maybe.

@AARPrick: Not into the pretty muscle boys normally, but… rrrraowl.

@Tommmcatt Yet Again: If it’s vitamins I want to get me some. If it’s lifting weights… life is too short.

@SanFranLefty: Not to nitpick, But the crazy ex-gov of OK is Frank Keating. One of the current crazy US Senators from OK is Tom Coburn. They all blur, I know. Common mistake. Has Frank mentioned how his plans to run for the Senate were thwarted when it came out he had accepted hundreds of thousands of dollars (including his kids’ private school and college tuition) from a supporter who ahd benefited from state contracts? thought not.

@Mistress Cynica: I cut-and-pasted Garofoli’s blog, I didn’t write the text, he did. I can’t figure out how to do the indent feature in the comments.

@SanFranLefty: I should have known you would never make such a mistake, darling. To indent the text, the tag is blockquote.

NYT: Troopergate – fire up the espresso maker and butter that croissant before sending money to ACORN.

I have no idea how that would work in practice, but I’ll have to file it away for future deliberation. I’ve got CB picking off the highlights throughout the day, but a sidebar list would be intriguing.

@SanFranLefty: Like Miss Cyn said, to get blockquoted text, you do the following:

<blockquote> This is my fantastically witty quote </blockquote>

This results in the following:

This is my fantastically witty quote

Use it the same you would a <b> or <i> tag, and remember the ending tag has a slash before the tag name.

I got a big bag of drug samples today.
Most all of it is crap that I already have scrips for, like boring old Baycol, etc.
Here’s one I’ve never tried: Pristiq (desvenlafaxine). Anyone tried this shit? I got 8 weeks worth of samples. Good stuff, or just crappy happy pills?

If you all haven’t seen it, read this dandy little piece in Salon on Talibunny’s extremist friends.

@Ewalda: I think Pristiq is incredibly new, like, the FDA approved it this past March.

@Ewalda: Let us know if you grow flippers or something. And if so, whether you like them. Better livin thru chemistry!