I Told the President to Fuck Off in Front of My Kids, and Now Everybody Hates Me for Some Reason 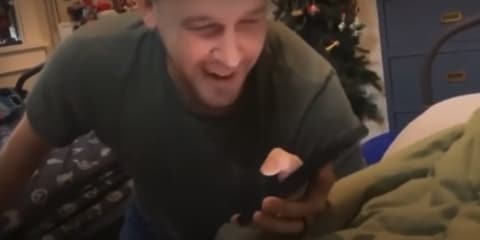 We take a fancy to this one, because, well, Oregon, particularly southern Oregon, land of hardy crackpots and survivalists. If, like us, you’re from hippieville Eugene, anything south is another country.

Wait, NORAD has a Santa hotline?

Okay, love that too. We loved hearing the NORAD Santa Tracker reports on the radio growing up, and we loved them even more when we later learned what NORAD was. Careful, NORAD! Don’t nuke Santa!

So this year, The Preznident of These United States happens to be taking your Santa calls — hey, we can all use a break from Joe Manchin — and American Citizen Jared Schmeck interrupts his delighted children to say a hearty “Let’s Go, Brandon!”

The Leader of the Free World (by default, now that Angela Merkel has retired) hasn’t heard that one yet, so he takes it in stride. But it lands for its intended audience — on Twitter — and takes off from there.

Dude’s no Stephen Colbert, but give him points for trying.

Then take them away, because he’s a chickenshit sumbitch.

Because — golly! — turns out some non-MAGA types also know what it means, and are none too happy. Especially after Jared turns to the state newspaper to whine about the consequences of exercising his God-given freedom of speech. Hahaha! Just joking, sir!

A joke Jared’s wife made a point of posting on Instagram — with not one, but two emojis crying with laughter — and that he made certain to tag #letsgobrandon in the title of his YouTube video of the call. That kind of joke. Sure feels different when you’re not coddled for it!

So that’s it, that’s the story, the story of a humble Oregonian who had his shot at greatness, then pissed all over it. And speaking as someone who grew up there before Portlandia, before Nike, before our hometown university bought a nationally recognized football team, a state we used to call “the one above California”, well, that’s just the way it should be.

nojo
11:24 am • Sunday • December 26, 2021
comment »
Choose Your Delusion
Ode to Forbode How Long Before a True Believer With a Sniper Scope Decides Trump Is A Traitor?
11 Comments
nojo

Dude’s taking his whole family down with him. Oregon Pride!

In the spirit of confession, I once texted back to a mayoral candidate’s (now mayor) campaign to get fucked after I got an unsolicited txt from his campaign on my cell. For the record I have never given my cell number out to local gubbiment.
It turned out my number was one of many illegally obtained from the local toll road operator database by a stupid Conservative Party operative (now convicted.) I got a number of (illegal) txts from the Tories for about 3 years till that operative was jailed (the PC candidate in my provincial riding had to resign in disgrace (whatever the fuck that means these days)) and the txts stopped from court order.
However, I did not put it on FB or twitter for the world to shame me as a fucking idiot. I’ve done a lot of stupid shit and own up to it, but I’m not going to take down the rest of my family for it. Also I’d prefer to keep quiet if my dad was jailed for arms trafficking as a member of the US Navy SEALs like his did some 30 years ago (and as well as owing Uncle Sugar some 450k+ in CoVID bennies.)
Typical moron loudmouth (waves at mirror.) Act first think last (if any.) Not realizing the social network blowback would be worse.

I’m glad to say that I have no idea what any of this means.

@Benedick: High-school Facebook friend is all “concerned” that Biden was handing ammo to the opposition by not knowing what “Let’s go, Brandon” means, and I wore out my fingers trying to explain that nobody outside MAGAland knows shit about it, and I’d rather have a president oblivious to the latest Twitter trends.

Actually, I thought Biden was just waving away the retard as parents do with crazed teens raving about nonsense, ‘Oh, yes, sure, go blow your brains out and eat the sweetbreads but be sure to put out the cat before you do. Done your homework?’

Jared’s going for the FULL! KYLE! now signing up media appearances and likely setting up a GOFUNDME.com to cash in on his oppression by terrorists from BLM and the Sierra Club.

Yes, after whining to the Oregonian, now he’s bragging to Steve Bannon. Too late, dude! No chickenshit backsies!

“Everything is a joke, but that doesn’t mean we won’t kill you, haha. Remember we are armed and crazy haha, and also sometimes nullify a jury, haha”

Happy new year. Stay safe (almost an impossibility these days) and a better one for most of us (we all know who doesn’t deserve anything good next year.)