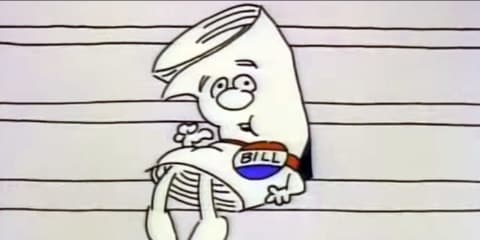 We’ve learned more about Joe Manchin and Kyrsten Sinema than we care to the past week: Their histories, their psychologies, Why They Do What They Do, the works. We know more about them than we do our own senators, a place in our head usually reserved for New York politicians.

And why? Yeah, you know why. Every vote counts!

Which is also why, yet again, we find ourself returning to one of our favorite infernal subjects: That Damn Senate.

You know the drill: 331 million Americans, according to the latest census. Doing the math — yeah, we did it — fifty Democrats (including the two “caucus with” types) represent 56 percent of our nation. Fifty Republicans represent 44 percent. Should be a breeze, right?

But fine, let’s kick Joe and Kyrsten across the aisle. That brings the population split all the way down to 55-45. Ten points! Let’s do it!

And that doesn’t include bringing DC and Puerto Rico off the bench. DC ranks ahead of Vermont and Wyoming in population, so folks there should have two Senators (and a voting House member) ensuring they’re not taxed without representation.

Puerto Rico — you might know it from an upcoming Spielberg retread musical — would place ahead of Utah in the standings. Surely they deserve some warm bodies in the Capitol, too!

We may think we live in a representative democracy, but the Senate has nothing to do with either. And since the judicial branch flows from the Senate, you can kiss off the Supreme Court, too, no matter what pablum Stephen Breyer would like to feed you. And as we’ve already seen twice this millennium, a President can take power in second place.

Have we mentioned voter suppression lately? Throw that in, too, the traditional Jim Crow Plus kind, and now the ultramodern Fuck Your Ballots method coming soon to a Republican-run state near you.

We’re going to all this trouble — again — to gird ourself for the political anguish coming like a hurricane the next couple weeks, the gnashing of teeth over Democrats not doing what they promised, despite control of Congress and the White House.

Trust us, friend, we share your cynicism about elected politicians, but that ain’t the problem here. Simply put, we don’t live in the country we think we do, and while changing some of it would require another revolution to fix the structural faults of the first one, the least we can do in the meantime is see shit for what it is. And it ain’t Manchin and Sinema.

WASHINGTON—In a maneuver that experts suggest could represent a significant setback for the legislative ambitions of Democrats, the GOP reportedly stalled an upcoming government funding bill Tuesday by detonating fifty tons of C-4 explosives inside the Capitol building. “This was a make-or-break week for Democrats, and the complete destruction of both Congressional chambers alongside the death of several sitting progressives is just going to make passing the Biden agenda even harder,” said political expert Andrew Srinivasan, describing the decision by House minority leader Rep. Kevin McCarthy (R-CA) to plant and detonate 100,000 pounds of plastic explosives under the legislature as both a “cunning political move” and a major blow to the $3.5 trillion reconciliation bill.

“Frankly, the coordination required to blow up the Rotunda alone shows how much better Republicans are at marching in lockstep and toeing party lines.”

At press time, several pundits had praised the Republicans for their restraint in avoiding the nuclear option of obliterating Washington D.C. with a tactical warhead.