Stinque
Home Latest Comments Log in
If it smells, we’re on it.
Stinque
America is a Death Cult.
BackstabWatch 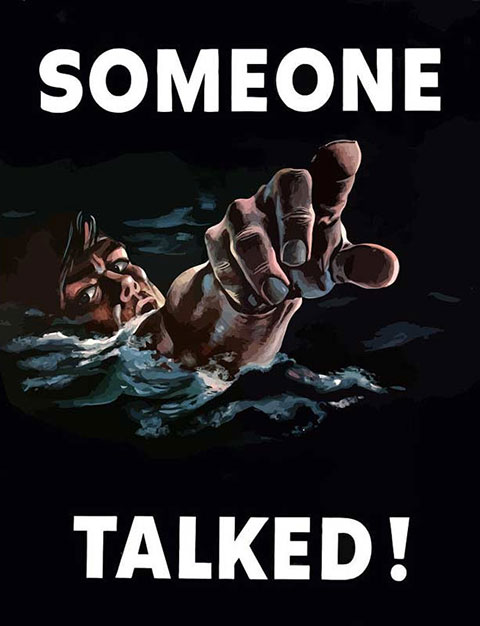 Much attention has been paid to the defiant op-ed in the New York Times, as is inevitable, as are the suspicions surrounding it.

On the surface, it reads as an heroic account by an anonymous insider to protect America from Donald Trump, maybe even to protect him from himself. Actions are taken to “insulate” the business of government from his whims. Without those actions, the worst we have feared would have come to pass.

The immediate, obvious suspicion is who wrote it. Because it was published in the Times, and because we trust the Times’ professional standards, if not their editorial judgment, we accept the claim of “senior official” as offered — we trust that they’re not inflating an intern, or just writing it themselves. We don’t know how senior, we don’t know how high up the food chain the writer grazes, but we presume it’s high enough to matter.

We suspect it’s not a Cabinet secretary. We all but know it’s not the Vice President, despite or because of the distinctive use of one of his favorite words — “lodestar” — and because if we know anything about Mike Pence, it’s that he’s toady to the core, just waiting for his shot.

And really, it doesn’t matter who wrote it. We won’t learn anything from who wrote it, just as learning who Deep Throat was didn’t add anything to the story of Watergate. It was an interesting detail, a human-interest angle, but it didn’t change the substance.

(Okay, fine, if we must play Clue, it was Jon Huntsman in Moscow with a stick up his ass.)

What’s interesting to consider is why the op-ed was written, and there’s been plenty of that, too. Maybe it was a message of hope from the inside, as intended, the Silent Resistance doing its part. Maybe it was intended to look good, preparing for the welcome moment when This Too Passes, and we can get back to America without blaming the folks who allowed this to happen to begin with.

Honestly, we suspect that’s the right call, although we don’t know why the writer would brother worrying about it. It’s not like we’re ever going to enjoy heads on pikes, or at least Truth & Reconciliation. The bastards always get away with it, the bastards always have, and hey, did you see Dubya at the McCain funeral? Wasn’t he adorable? Sure, America is still deeply burdened by the shit he and his cohorts piled on it, but we’re all in this together!

There’s also the suspicion that maybe ignoring the wishes of a duly elected President isn’t such a good idea, that breaking norms is really just setting precedents for the next round, that maybe this isn’t the coup we’ve been fearing, but we’re getting one anyway. That would be the Destroying America in Order to Save It hypothesis, and while we appreciate the concern, shit’s pretty fucked right now anyway, and we’ll deal with the consequences if the Republic survives that long.

And, finally, there’s the Anonymous Coward angle, which you really can’t argue with: If it’s this bad on the inside, this bad for the nation, why not just step up and do something about it? Come clean! Invoke the 25th! Testify at a Congressional hear—

Oh, wait. They’re all cowards too, aren’t they, and they don’t bother being anonymous about it. They’re proud to put their names on bold statements of opposition, as long as they also don’t have to step up and do something about it. We celebrate those cowards. We just buried one. Dubya weeped.

After you circle the subject, after you get through all the noise, you’re left with one conclusion, and it’s nothing new, nothing that hasn’t been obvious since credible news of Russian meddling first leaked and they all determinedly looked the other way, as they continue to do. There’s nothing new you can think, and it’s the same thing you’ve known all along:

They’re all just fucking useless, and the only real hope for America is to get rid of them as soon as we can.

I’ve got two theories on who wrote the piece:

This is partly because Trump has taken some very public dumps on Nielsen for not snapping her fingers and making undocumented border crossings come to a halt. And partly based on the classic non-denial denial she issued in response:

“Secretary Nielsen is focused on leading the men and women of DHS and protecting the homeland – not writing anonymous and false opinion pieces for the New York Times. These types of political attacks are beneath the Secretary and the Department’s mission.”

Of course no one’s asking Nielsen whether she’s focused on writing false opinionpieces. They’re asking if she wrote this opinion piece… still waiting!

2) My other theory, far more depressing and Machiavellan, is that this was written with the White House’s approval (or at its direction) to create the impression that, despite the fact that Donald Trump is a world class, dangerous, fucking idiot, there are “grown ups” in the White House keeping us safe, so there’s no need to worry, no need to get upset and vote for Democrats in November.

@Serolf Divad: I wouldn’t worry about option 2. If we know anything about these despicable shitbags, it’s that they’re both totally evil and incredibly stupid, so the idea that they could even strategize such a propaganda ploy during the non-stop White Trash House meltdown is completely ridiculous. Also, they hate each other almost as much as we despise them, so it’s not like announcing a palace coup is gonna do them any favors in the short term.

If anything, it’s a pathetic attempt to pre-redeem themselves prior to the inevitable and calamitous end of this perverse, illegitimate regime. I suspect the traditional media like the Times will be all on board with that, since they’re status quo-worshippers who’ll put the Derp State author on the front page to be hailed as a hero once their identity is uncovered. We won’t let them get away with that at least.

@nojo: FSM forgive me, I just emailed the perfect artist’s rendering of our new digs in Hell.

For me the biggest argument against #2 is Trump’s ego. I don’t think he could ever allow something like this to be published, regardless of the strategic brilliance of doing so.

@Serolf Divad: I didn’t get around to reading it until a couple of days after everyone was talking about it, and I was astonished at how much baldfaced bullshit it is. Hooray tax cuts? Really? That’s the reason everyone’s keeping their traps shut, so they can push through everything they can.

There was a case to be made about Huntsman, given the nature and perspective of the Russia passage, but really, Paul Ryan’s office could have spit out the whole thing.

Al Qaeda’s goal was to draw the US into nation-bankrupting, unwinnable wars in the Middle East, while also totally discrediting our self-proclaimed values and democratic system of government. Mission accomplished with a big assist from our own Republinazi party, craven, pathetic Democrats, and the relentless, sinister stupidity of the American public. They’ve ruined the country more any terrorists ever could. Champers all around.

@Serolf Divad: I vote for #2, and it’s not a coincidence that it was sent to the Gray Lady in the middle of the clusterfuck confirmation hearings for Kavanaugh.

It’s all about the judiciary. We are so fucked, people.

This could be the bomb that finally blows Prezinazi AntiChrist to smithereens.
Brace for impact!

@¡Andrew!: Or, since he’s still sharing defense intel with Trump’s lawyers, he’s getting greenlighted for a pardon.

@¡Andrew!: Details not yet available (and may not be as such), but Manafort is indeed “cooperating”, apparently beyond a way that a pardon would relieve him. He’s turned snitch, but not yet clear what he’s snitching about.

OT – taking this opportunity to brag about my family’s Wilmington, NC community paper that might die again. At least this time it’s not an angry mob of white supremacists destroying it and the community. It’s just, you know, climate change deniers.

Thirty years later, my family rebuilt on the old site and started up the paper again. My father is super stressed about the paper. Our family evacuated to Fayetteville. I told my dad that I’m sure the paper is insured.

My dad: They have to get the paper out. People need the paper.

I never felt emotionally attached to it – you know – it’s a small time black paper. Today, I grieve.

@JNOV: I grew up around a larger-town newspaper as well as working for a small-town one, so I totally get that part of it — I know how those work from the inside, particularly the economics of it. Alas, I’ve also been following those economics all my life, so I’ve felt every step of a very long decline.

@¡Andrew!: Break out the popcorn, I guess. Sounds like he’s flipping to keep his family out of it.

@nojo: Yes. To me it was like, “Yeah, and our relatives that decided to stay in NC (silly people), have a newspaper.”

I knew that the old paper had been destroyed by a mob, yet I didn’t feel the history like my father does. Our branch moved north in the late 19th and early 20th centuries, probably due to the riot. I need to ask my father more questions. I didn’t appreciate how much the paper factored into the history of Wilmington and Reconstruction. In the age of Trump, the paper is needed just as much as it was back then.

@JNOV: I’m been following TPM Josh on this — and sharing his suspicions — and through this week the line was that the “mutual defense” agreement was still in effect, basically the lawyers sharing notes.

This now appears to be a deliberate feint on Team Manafort’s part, with selective leaking. Team Trump was caught totally off-guard, with no time to rush in with a pardon. As I understand it, the agreement is “pardon proof”, meaning Manafort squeals no matter what.

And why? His family could be roped in if he doesn’t fall on his sword.

Trump, of course, would throw Junior under the bus in what passes for a heartbeat. And Junior has spent all his life knowing that. He really is a pitiful creature.

@nojo: From your keyboard to the FSM’s noodles, let Manafort be the bomb that finally blows the Rapist-in-Chief to smithereens.

@¡Andrew!: Speaking of rapists, the Senate has a chance to not Anita Hill someone.