Stinque
Home Latest Comments Log in
If it smells, we’re on it.
Stinque
Mastodon: @stinque@mas.to
The Smell From Here 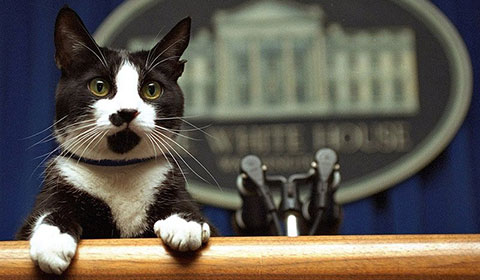 Okay, no, not Socks. For one, Socks is, uh — are the children upstairs? — dead. Carrying around the desiccated husk of the former First Cat is probably bad optics.

And even a Reanimated Socks wouldn’t test well in focus groups. Cat Lady vibes, for one. And, more broadly (oops! sorry), feminine vibes. Dogs are Manly. The American public approves of Manly Presidential Critters, which is why Bubba got Buddy, whom nobody remembers, because Buddy was a Usurper of Socks’ rightful throne.

No offense, Buddy, but you were just a dog. Socks owned the joint, as cats do.

Anyway: Hillary could use a cat, because being around a cat would bring out some humanity in her, which she sorely lacks. Unless it was one of those Bond Villain white cats, which it probably would be, so never mind, sorry to bring it up.

But humanity is what Hillary needs, if she’s going to defeat Donald Trump. Not feigned humanity — please, dear gawd, not feigned outrage, or feigned maturity, or feigned whatever her consultants tell her to feign this week.

Let us explain. The last time America faced a real demagogue, not just one of legions of demagogue wannabes, was generations ago. People lived in absolute fear of him. Reputations were shattered, lives were ruined, attacks were useless.

Until one afternoon, a meek but very human gentleman said those words that have lived in history:

And just like that, Joseph Welch slew the dragon of Joe McCarthy.

Humanity is an amazing thing. It works wonders.

Bernie Sanders exudes humanity. He can’t help it — it glows from every pore. Bernie could stand up to Trump, be his delightful curmudgeonly self, and take care of business.

But, for whatever reason, Bernie’s popular appeal is limited to Cool White Kids, and he’s not going to be the Democratic nominee. We’ll just have to wait for Elizabeth Warren to find her footing.

That leaves one other politician in America capable of dispatching Trump on a public stage.

And, luckily for the presumptive nominee, she’s married to him.

Whatever you think of the man himself — and please, be our guest, think the worst — Bill Clinton is a master politician. His understanding of policy, and his ability to express that understanding in a thoroughly engaging manner, remains unrivaled. His star turn at the 2012 convention was mesmerizing. He’s still got it.

Imagine Bubba debating Trump, either in person or (more likely) via Dueling Soundbites. Wouldn’t that be fun? Trump pulls one of his Schoolyard Bully moves, Bubba just laughs it off, then goes into a critique of Trump University that gets to the heart of the matter, the real people who spent real money on empty promises.

And lord knows Hillary can’t do that either.

The campaign, to their credit — the only credit we’re willing to give them so far — knows this. Besides the millions they’ll be wasting on attack ads, and the empty slogans they’ll be putting in Hillary’s mouth — “Make America Whole Again”? Really? — they know that sending Bill into the field, whatever the (highly entertaining!) risks, is the only way they can contain Trump.

Because it takes a human. It’s that easy. And we have proof that it works.

I vividly recall Clinton’s campaign going full Hindenburg in 2008, and I’m stunned that otherwise reasonable people think that re-running the most openly corrupt, craven, duplicitous, and polarizing establishment candidate in a year in which voters are in all-out rebellion against the establishment is a great idea.

Unfortunately I think Bubba has been living in the bubble so long schmoozing at Davos and having his vegan meals prepared by chefs, that he wouldn’t be able to connect with regular schmoes working 60 hours a week to scrape by and worrying about a car repair bill or kid’s broken arm upsetting the entire family’s financial balance.

While I have some issues with Roger Cohen’s writing in the past, his view from Europe is sobering:

It’s the echoes, now unmistakable, of times when the skies darkened. Europe knows how democracies collapse, after lost wars, in times of fear and anger and economic hardship, when the pouting demagogue appears with his pageantry and promises. America’s Weimar-lite democratic dysfunction is plain to see. A corrupted polity tends toward collapse.

I’m glad it’s clear to more people than just me and my tiny echo chamber of FB friends that we’re basically at the same point as Germany when a fresh young Adolf was starting to do his firebrand thing. Drumpf is neither fresh nor young, but he’s got the firebrand down pat, and as Vox so clearly put it, there’s a yooge proportion of American voters who are ready or will soon be ready to back him on it.

@IanJ: For me the problem is less Trump himself and more w/r/t his followers.

The newly elected chair of the Republican Party in the county that includes the Texas Capitol spent most of election night tweeting about former Gov. Rick Perry’s sexual orientation and former President Bill Clinton’s penis, and insisting that members of the Bush family should be in jail.

He also found time to call Hillary Clinton an “angry bull dyke” and accuse his county vice chair of betraying the values of the Republican Party.

Morrow’s election as Republican chair of the fifth-largest county in Texas left several members of the Travis County GOP, including vice chair Matt Mackowiak, apoplectic. Mackowiak, a Republican strategist, immediately announced over social media that he would do everything in his power to remove Morrow from office.

@SanFranLefty: Ladies and gents, AmeriKKKa’s next Vice Preznit. Is he single?

@IanJ: The biggest difference is that Mein Trumpf has no interest in actually governing and just wants to be our first Twitter troll preznit. He would nuke a US city for ratings, but his Thoughts and Prayers* twits would be with us.

*Actual Thoughts and Prayers not included.

Is no one else worried that the Republicans will hold their noses and unite behind Cruz to keep Trump off the ticket? I’m actually more afraid of living under Rafael than the Donald. One’s a huckster, the other is motherfucking evil.

@Mistress Cynica: The way I’m hearing it — which may change, given the weirdness to date — the GOP Establishment detests Cruz so much, it’s not even a consideration. Were he not a total asshole to everybody, his chances would be far better than Rubio’s.

Then again, right now the GOP Establishment is more afraid of Trump than everyone else — afraid he’s going to tank all the down-ballot races.

So, in that alternate universe, all they really care about is denying Trump a first-ballot nomination, declaring an acceptable candidate during a brokered convention, and all but ceding the election to Hillary to save their skins.

In other words: They fear Trump more than they hate Hillary. Which is quite a feat.

@Mistress Cynica: I also find Cruz more disturbing than Trump. He basically wants to install a Saudi Arabian-style theocracy. Fortunately, he’s too gawdam liberal by Texas standards, so it won’t happen. The fact that he’s viscerally repulsive, and that his face is a fist sponge helps, too.

@SanFranLefty: Agreed, it’s not Drumpf per se that I’m concerned with, it’s the terrifying amount of support he has. There is probably already a very intelligent sociopath working on taking advantage of the same authoritarian voters to lever him (or, less likely her) self into power in the next few years.

@SanFranLefty: Oh, that new Republican Party chair is awesome. When asked how he felt about the GOP establishment trying to remove him from office: “Tell them they can go fuck themselves,” Morrow told the Tribune.

He made the Seattle news with this munnie shot: “I decided to run for Republican County Chair because I’m disgusted with the involvement of the Bush family in American party politics,” Morrow says. “They’re criminals. They’re vermin. They’re scum.”

“I’m for flushing the commode on the corroded political rectum of the American political system.”

OK, I’ll shamefully admit that I burst out laughing as the NPR reporter was describing today’s news conference, in which Mein Trumpf said that Rmoney would’ve dropped to his knees and blown him for Trumpf’s endorsement in 2012. Wow, we’re really in the middle of a national crackup.

The GOP base that Trump appeals to is like a hard core drug addict, mainlining drugs at levels that would kill a normal person. Their need for a bigger fix to get high just keeps getting worse.

[Chorus:]
What have I become
My sweetest friend
Everyone I know goes away
In the end
And you could have it all
The empire of fools
Drumpf won’t let me down
Drumpf will make you hurt

@FlyingChainSaw: Awesome. I’ve been concerned about you (and all of us) having to endure another Clinton campaign. Stay strong.