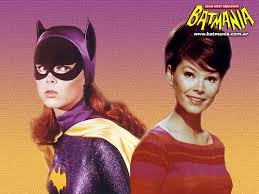 Yvonne Craig was almost as old as my parents? Really?

No offense to Yvonne, but in this 8-year-old’s critical opinion, Batman season 3 really sucked.

@nojo: after school it was reruns – two Batmans (next cliffhangar last, of course) and then Voyage to the Bottom of the Sea. Best afternoon ever.

TJ (sorry)/ Is doxxing a always a bad thing? Some of this data dump might not be real, but I hope this part is.

@blogenfreude: That was the problem with Season 3: No split-hour cliffhangers. Undermined the rhythm of the show.

@JNOV: Doxxing is usually a bad thing because it encourages and enables harassment.

With Ashley Madison, the only legit reveal would be a family-values public figure caught with his hand in the cookie jar. Otherwise, none of our business.

And yes, expect false positives. With no authoritative source, it would be really easy to slip an Easter Egg into the data dump.

@nojo: Thanks, nojo. I was wondering how close to a Cocktober thing this might be, but the whole story reeks.

My Grandmother when she was alive: The Internet is like a tattoo.

Me: Can they actually get all that stuff off of there servers? Don’t NSA types routinely confiscate servers and try to recover deleted info?

Hackers: AM, you’re a bunch of liars and bad moral folks. That info is still available, and Exorrionzzzzzz because we’re good moral folks.

Oh and hey – my ish was stolen during the OPM hack, but I'm not interesting.

@JNOV: For the record, a Duggar is fair game. But Gawker is also quick on the draw, so call it a tentative urban legend for the moment.

In terms of Geek Theoreticals, you can vacuum a joint with sufficient credentials, so ten gigs of compressed data is easily conceivable. Mix in the confidential company docs also lifted, and there’s no reason not to believe the stash is legit.

The only problem: Chain of custody. I would be wary of anybody tossing in extra names before posting. Duggar may be too good to be true.

@nojo: Yes to all you wrote. When I was talking about getting deleted data off of servers, I was thinking that AM’s promise to scrub an account for a fee sounded too good to be true, but I suppose a lot on that site sounded the same, so meh.

I operate under the assumption that throwing my computer in the toilet won’t keep someone from getting at information on my hard drive if they really want it.

Is there a hacker chain of custody thing?

Again, this just seems odd. Church Lady Hactivists? Let’s see now, who could it be? Stan?!?!?

@JNOV: Well, like most things Geek, this gets complicated.

Yes, you can delete a table row — a user entry —with a single command. And, if that table row contains everything to be known about that user, you’re done. Anything beyond that requires forensically examining the disk itself, presuming it’s a platter with magnetic residue, and not a flash drive. And, for that matter, presuming it’s not a virtual server with shared disk space that might be quickly overwritten with other data — i.e., a cloud server.

Then again, a sufficiently complicated membership system that scales into the millions might have bits of user data all over the place. For that matter, a mission-critical system will have multiple backups over weeks or months. So maybe I’ve deleted the Live Member, but there remain data ghosts in the machine.

And all of this presumes competent programming and management. What kind of geek works for Ashley Madison? Google’s rejects?

1. Skip the toilet, drill a hole or three in the disk.

2. For “forensic geeks” (they exist), chain of custody is paramount. When the Feds nabbed Silk Road dude at the Frisco library, they cuffed him before he could close his laptop, then kept the laptop running until they could secure the drive. It was criminal evidence, and all legalities apply.

“Never write anything on the intertubes that you wouldn’t want read aloud in public” has always been my motto.

Speaking of, how do you feel about Deez Nutz? Apparently after being thrust into the spotlight, Mr. Nutz is rapidly causing friction against the other presidential candidates, surging in the polls, and he’s close to blowing up big time.

The Josh Duggar AM accounts scandal is surreal–you cannot make this shit up! People like him must have some seriously screwed up wiring upstairs that makes them incapable of feeling shame or cognitive dissonance.

He’s like all of those rabidly anti-gay pastors that can barely remove the throbbing, rock-hard, thick, juicy cocks from their mouths long enough to condemn all of the hummuhsekshals to eternal hay-ell.

@SanFranLefty:
Or that Darth is so toxic, even death doesn’t want him.

I’ve read mixed reviews, and until I am invited to join the dark underbelly of the web (I’ll get a new computer, super seed box and uber VPN if anyone is reading – promise!), I think I need to augment Netflix.

nojo, is there this shadow world of elite listservs?

@¡Andrew!: Deez Nutz. Every time I read that, I want to do this.

@SanFranLefty: I was watching a PBS documentary (American Experience maybe) about Jimmy – he’s stubborn as hell.

@JNOV: All I know about the Dark Web is what I read in the papers. No Tor, no nothin’.

And I’m pretty satisfied with HBO Now, even if True Detective sucked.

@nojo: Wait. Wait. Waitwaitwait. True Detective sucked? That was one of the reasons I was thinking about getting it. Not the only reason, but, shit. It sucked? Damn.

@JNOV: Season 2. Started bad, got worse. Writer got full of himself.

HBO GO free trial began with Gone Girl. I’ve set a reminder for two days before they start charging me. I need to find out if Game of Thrones lives up to the hype.

Okay. The Dee Barnes thing. I was never an NWA fan. My parents are both mixed, but my mother used the N word liberally and even taught me a poem(?) that has to do with flies. Her grandmother (also mixed) taught it to her. It’s a repugnant thing to hear or even have in my brain. If I start to lose my memory, I hope that’s the first thing that goes.

My father, lighter than my light bright and damn near white mom but still able to rock the Angela Davis fro, never, ever said that word. I said it once in his presence, and he flipped.

Once in a while some female rappers pushed back like MC Lyte, Salt N Peppa, Queen Latifa, and whoa Missy Elliot. Still, no one gave a shit about Big Pun and the whole Bitches and Hos bullshit. Huey breaks it down well. Riley doesn’t get it.

Fuck Apple for standing by Dre and his Beats.