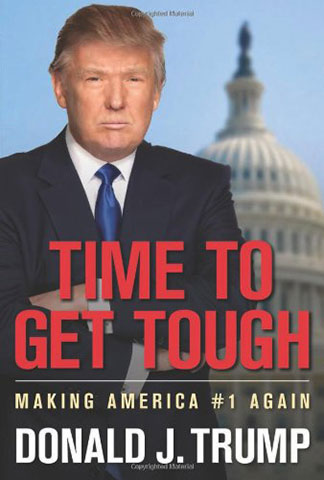 Blurb: “President Obama has been a disaster for this country. He’s wrecked our economy, saddled our children with debt, and gone around the world apologizing for America — as if the greatest nation in the world needed to apologize for being the land of opportunity and freedom that we were before Obama became president.”

Review: “The Republican Party morphed into the Republicrat Party way back and the ‘silent majority’ knows it. Trump may be the potential Winston Churchill true conservatives hope and pray he truly is. If he NEVER apologizes (instant death) and continues to take on the collective enemy of America, he will be the POTUS who will undoubtedly restore America to the great nation it once was. No ‘politically correct’ apologetic Republicrat can do it.”

Customers Also Bought: “The Mystery of the Shemitah: The 3,000-Year-Old Mystery That Holds the Secret of America’s Future, the World’s Future, and Your Future!”

Footnote: A Sanders-Trump race would be fucking awesome.

Time to Get Tough [Amazon]

Trump: The Pied Piper of the Stupid.

I can’t believe I’m looking so forward to Thursday’s debate.

Have your airline barf bags at the ready. Jeezus.

To paraphrase one of the Gaukeur commenters from way back in 2007, the best outcome would be a lightning strike and mass electrocution of all of the RepubliKKKan candidates, followed by the greatest opening to Six Feet Under ever.

@¡Andrew!: I was partial to the baker in the industrial dough mixer episode ( I have a process background) If one could throw all of these jabronis in to a dough mixer just to make certain nothing survives.

@DElurker: I’m still praying to the FSM for a dodecafuneral. Next week works great.

Oh shoot, I thought that 12 of the horrid RepubliKKKan clown car candidates would be featured on the dumFux Nooz debate, rather than 10. Well, it will cause an alarming spike in alcoholism nonetheless.

Hey Stinquers, I haven’t been here for a while, but I’m still alive, giving Lefty a hard time about the Giants. So here’s my question: will there be live-blogging of the Fox/Repub debate tomorrow night?

@Dodgerblue: I’ve been cable-free for more than a year, so nothing here. But I can set up a starter post if there’s interest.

@Dodgerblue: I’ll be having dinner at Beast in PDX with our very own homofascist. I plan to watch the highlight reel later.
I swear Fox deliberately scheduled this for Jon Stewart’s last night so he couldn’t rip it to shreds in his next show.

Someone wearing battle armor is gonna have to throw themselves on that grenade.

@Mistress Cynica: My Portland daughter, whom you have met, thinks that Beast is somewhat overrated. I’ll be interested in your take.

@Dodgerblue: There’s so much hype, it would almost have to be. There will also be as much meat in this meal as I usually eat in a month, what with the Charcuterie plate and the short ribs main. Even the salad is garnished with pork. Mr Cyn will be in heaven.

@SanFranLefty: I gave myself a gift a while back: no SOTUs. no debates, no press conferences, no award shows. The debate highlights, including those of the children’s table, will be on YouTube soon enough.

@Mistress Cynica: I will check with our friend The Good Doctor to get her foodie take on this Beast thing.

BTW, we had the organic local pork roast with wild and reduced spinach with red onions, squash and tomatoes paired with a nice crisp Sapporo beer. I’m sitting out on the back porch in my GOP Free Zone with a Santa Fe Nut Brown Ale listening to the crickets.