Love is a Many-Splintered Thing 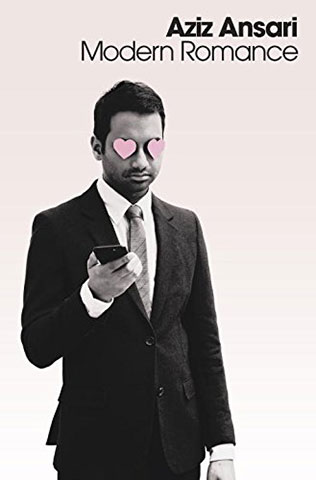 Blurb: “In a short period of time, the whole culture of finding love has changed dramatically. A few decades ago, people would find a decent person who lived in their neighborhood. Their families would meet and, after deciding neither party seemed like a murderer, they would get married and soon have a kid, all by the time they were twenty-four. Today, people marry later than ever and spend years of their lives on a quest to find the perfect person, a soul mate.”

Review: “Most of the book is focused around online dating and how the current generation is navigating themselves through this new world. Why is it so hard to feel satisfied when there are so many options at our fingertips? How did people even find anybody before with their limited options?”

Customers Also Bought: “Spinster: Making a Life of One’s Own”

Footnote: How few is “few”? We grew up in the Seventies, four decades past. We were 24 in 1983. By our time the Cultural Shift had already happened — long ago, in a Young Man’s perspective — and our friends were much more prone to shacking up than getting hitched. Married by 24? Dude, that’s our parents. In the Fifties.

And soul mates? While we would date the popular concept to the Summer of Love, you can draw a line all the way back to Plato, for chrissake, and the expression itself to Coleridge, smack in the middle of the — wait for it — Romantic Era.

Yes, yes, sexting, Tinder, Grindr, the Atomization of Relationships, the Brave New World of fornication in the endtimes of the Internet. No doubt the mechanics have changed, and dramatically. But we’re the same Fucking Mammals we’ve always been, and with seven billion of us crowding the planet — more than twice the number when we were born a few short decades ago — it would seem that souls have had few issues finding mates.

Every generation believes it is the most special and precious of them all (some more than others… I see you Boomer media types) but the reality is we aren’t really.

It seems we Gen Xers resent the fuck out of them, but then try to emulate them poorly.

According to this chart from the Census Bureau, the big shift took place in the mid-70s, so you’re right that by the early 80s it was an established trend, but you don’t have to go all the way back to the 50s to see what he’s describing; a decade earlier and your cohort would have been in that same boat.* Also (and here’s my bias showing), I went to his book talk this week and he actually said that, in a way — since the various apps and sites let you connect with people in your immediate vicinity — we’ve returned to dating (if not actually marrying — ay, there’s the rub!) people who live in our neighborhood.

And to the larger question of differences among generations, on the one hand, I think that we’ve effectively fetishized examining and exaggerating the virtues and vices of each generation to an awful degree. On the other hand, my generation truly does seem flakier than previous ones, and that flakiness certainly extends to dating. His advice for guys trying to start relationships with girls, which should be painfully obvious but somehow isn’t, is to ditch the texts that convey little interest and, hence, go nowhere (e.g., “What are you getting into tonight?”) and just make actual, concrete plans. How novel.

*Case in point, by the time my mom turned 24 in the mid-70s she was married and had her first kid, and my sense is that was entirely typical for the time.

@ManchuCandidate: I’m on the buttcrack between Boomers and Gen X, so I’ve never identified with either. (And, thank jeebus, I’ve never been a demographic marketing target.)

Then again, I’ve also been a lifelong observer of Boomer Fallout, starting with the Mellow Secenties Day After the Sixties Binge. It was the Boomers who brought us modern self-involvement, most notably the verbing of “parent”, a neat trick circa 1982 that adroitly changed the focus from their kids to themselves. Sure it’s fun to bash Millennial Snowflakes, but who raised those bastards?

@mellbell: You’re right — I’m just young enough to take for granted what was still in flux a few years prior. It really took the Seventies for the Sixties to settle down and settle in.

Meanwhile the Stinquers in the Pacific Northwest are phucked.

Bill O’Reilly sent one of his employees to ambush different members of the San Francisco Board of Supervisors, accusing them of enabling the murder of Kate Steinle by declaring the city a “sanctuary city” where undocumented workers can access health care, police and fire assistance and other public services without fear of deportation or other forms of government reprisal.

[…] Katy Tang, on the other hand, excoriated the microphone-wielding Fox employee for ambushing her and accusing her of complicity in a murder.

“Of course Fox News would be this rude,” she said, turning to walk away. When he chased her and continued to pepper her with questions about her role in the death of Kate Steinle’s death, she said, “You’re interviewing the wrong fucking person.”

Scott Wiener didn’t even break his stride as he made his way to his office.

“Fox News is not real news,” Wiener said calmly. “And you’re not a real reporter. I talk to real news only.”

@SanFranLefty: Now that I’m safely on the other side of the Rockies, I can enjoy that story. Although calling Eugene “west of I-5” is a minor truth of no practical value. You’re safe if you cross the bridge into Springfield?

@SanFranLefty: To put the odds in perspective, there’s a 70 percent chance that we won’t experience a major quake in our lifetimes and a 90 percent chance that we won’t enjoy a visit from El Sismo Más Grande during that time. We have small, impeceptible quakes all the time, and let’s hope they stay that way. It is ludicrous that we don’t have a proper early warning system, not that it could do anything really, other than tell you to kiss your ass good-bye.

We won’t notice any before and after differences in our apocalyptic traffic jams.

Besides, what’s the alternative? Stay here in our beautiful, liberal paradise and face certain death or move to Eastern Washington and shack up with the bug-eyed, hate-KKKrazed, neo-fascist, Trump-fellating Republicans?? No.

@¡Andrew!: The Reddit AMA is a good time. meh

@¡Andrew!: Ack, you got pube comb-over imagery in my mental cornflakes…

Brace for the Bill Clinton Apology Tour. For $10 bucks extra he’ll come on your $&^%!

Hilarious back and forth on Twitter between Dan Savage and a Teabagger Republican Congressman from Georgia (or the Congressman’s intern/butt-boy). Said Congressman has a fixation on items being put in people’s asses. Fucking funny, especially when the Savage Love readers chime in.