Grownups of Our Time 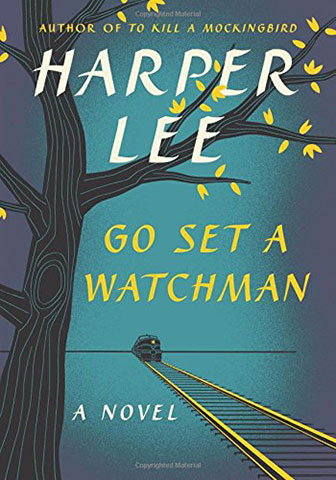 Blurb: “Maycomb, Alabama. Twenty-six-year-old Jean Louise Finch — ‘Scout’ — returns home from New York City to visit her aging father, Atticus. Set against the backdrop of the civil rights tensions and political turmoil that were transforming the South, Jean Louise’s homecoming turns bittersweet when she learns disturbing truths about her close-knit family, the town, and the people dearest to her.”

Review: “‘Watchman’ is about fallen idols and disillusionment. Jean Louise tries to reconcile how moral paragon Atticus Finch could be racist, and that’s what the readers have been trying to reconcile, as well.”

Customers Also Bought: “Between the World and Me” by Ta-Nehisi Coates

Footnote: Having toiled for fifteen years on behalf of a state law school, we fully understand the influence of Atticus Finch on generations of idealistic lawyers. We also understand that the provenance of Go Set a Watchman — drafted in the Fifties, before To Kill a Mockingbird — is somewhat in dispute.

But let’s be clear: Just as Lincoln shared, and ultimately transcended, the prejudices of his time, so does Atticus Finch. Do we condemn him as a child and grownup of the Jim Crow South, or do we celebrate him for defeating his own demons in service of justice? Isn’t that the true ideal of the American justice system, whatever its many historical and contemporary failures?

Atticus meh. Is the book any good?

The book of faces reminded me that today is baked’s birthday. I was thinking of her this week when Mr Cyn got his first legal pot plant.

@Mistress Cynica: I miss that crazy chick. Is Mr. Cynica going to name the plant the way she named hers?

@SanFranLefty: Yes, he had already named this plant “Ceres”, but he’s agreed to name the next one for baked. We were laughing about her posts of the enormous pot plants she and Ratbastard had brought into the bathroom to protect from the hurricane.

@Mistress Cynica and Lefty: I have the FB memories feature enabled. About a week ago, it told me that I had a shared memory with baked. I’d never seen Harold and Maude, and I posted a quote. She replied, “throws ring into the ocean. ‘Now I’ll always know where it is.’ “

@Mistress Cynica: The DC State Fair is introducing a new category this year, “Best Bud,” in honor of its being legal to grow here now.

@Nojo: Today’s tweet re: Gawker made me snort. I assume you saw that Wonkette was man-splaining to Gawker, too?

@JNOV: @Mistress Cynica: Oh, man, I forgot about that part of hurricane preparation. And JNOV, that is her in a nutshell. One of my regrets in life is that I never got out to T&C to spend a week by the pool smoking weed with her and her beloved kitties and dogs, and Ratbastard, bless his heart. The closest I ever got was we both flew through the Miami airport one time in 2008 about 10 hours apart from each other.

@SanFranLefty: Haven’t read them since The Great Exodus, but yeah, that’s pretty much it. To quote an old journalism line, “Freedom of the press belongs to those who own one”, and last I checked, it’s still Denton’s baby.

Crusty J-School Prof advised us to have a Go to Hell Fund, in the (apparently likely) event we ran afoul of Management. I don’t recall him also recommending we post self-righteous screeds on the office bulletin board. You save that shit for the bar afterwards.

So did anyone watch Sharknado 3: Oh Hell No! last night? I saw something somewhere that mAnn Coulter had a cameo in it, so I was hoping that the shark chewed up that bitch troll from hell.

@SanFranLefty: WaPo has a funny recap here. It sounds as though their sense of DC geography was only slightly worse than Aaron Sorkin’s.

@SanFranLefty: Check Coulter’s coffin–I guarantee she’s not in it!!