Stinque
Home Latest Comments Log in
If it smells, we’re on it.
Stinque
Winston loved Big Wordle.
Gods Walk Among Us, The Great Beyond 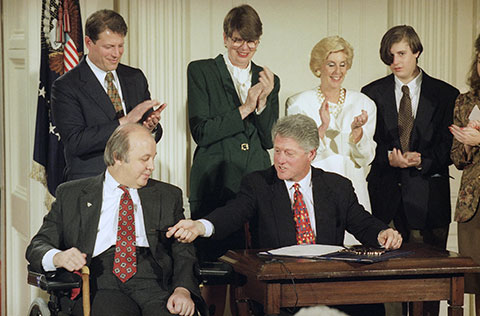 After her husband Jim Brady was shot and paralyzed in the assassination attempt on Reagan, she became a relentless campaigner for gun control, pissing off millions of gun nuts in the process, and  saving hundreds of thousands of lives with the limits on gun ownership of the Brady Law of 1993 that was enacted as a result of her tireless work.

Thanks for posting this. It is sad that it takes events like Brady’s to turn a conservative into a liberal. And remember, the billionaire who pumps a couple hundred thousand into Jeb’s campaign can afford to send his daughter to Finaland or Israel (very good medial care) for an abortion. The policies they advocate will never touch them. Money, and all that.

@blogenfreude:
More like a lack of empathy for anyone not in their “tribe” or social circle. Having loads of money never stopped FDR from enabling the New Deal.

@blogenfreude: I’d like to think she’s different from all the raging anti-ghey Rethugs who suddenly repent when they learn their son has teh ghey.

Finland or Israel? Fuck that, they’ll send her to the best OB/GYNs you can find within a 10 mile radius of their mansion. Don’t think they couldn’t find an abortion within 15 minutes of any red state’s capital, if there’s enough money.

@SanFranLefty: well, I’ve been told, by people who should know, that if you’re outside this country, that’s where you go.

It’s really upsetting that a huge number of evil, stupid people have given almost $1M to those loathsome, vile Indiana pizza people (“Even lesbians wouldn’t serve pizza at a wedding” — Rosie O’Donnell), so may I humbly suggest a contribution to an organization that desperately needs a few bucks:

I gave $25 and anything helps. Please feel free to share with friends and family. Thank you.