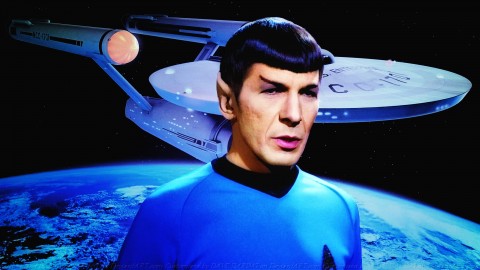 Heard he had to make the Vulcan hand gesture behind his back – could not do it without the setup. At this point, I could care less. He was a huge part of my childhood.

[Spock slowly walks over to the glass and pushes the intercom]

Spock: The ship… out of danger?

Spock: Do not grieve, Admiral. It is logical. The needs of the many, outweigh…

Kirk: The needs of the few.

Spock: Or the one. I never took the Kobayashi Maru test until now. What do you think of my solution?

Spock: I have been, and always shall be, your friend.

[he places a Vulcan salute on the glass]

So long Leonard Nimoy. You were the most human person I ever met.

@ManchuCandidate: Dammit, that scene is always good for a thorough tear duct cleaning.

@ManchuCandidate: @¡Andrew!: did you two see the second JJ Abrams reboot – that scene?

@blogenfreude:
I fast forwarded through most of Into Dumbness so I probably missed it. Amazing what you miss when one only takes 15 minutes to watch a movie.

I have to give so much credit to the human being who brought the alien Spock to life and never once gave all of us fans a reason to think less of the character. Spock made intelligence something to celebrate and not hide. He was certainly a role model to a nerd like me who felt different and isolated in high school and college and at work. Offhand I can’t think of another fictional character I ever idolized like Spock. RIP Mr. Nimoy and thank you.

@ManchuCandidate: watch the whole movie. I have the bluray, and I love it plot holes and all. It has a tribble in it. At that point, I forgave JJ everything.

@ManchuCandidate: Or just watch it until they land on Alien Planet, and skip the rest.

Or just skip the whole thing and see if #3 is better.

Hey, there’s a Tribble in the first reboot. You don’t need #2 for that.

I’m sure baked is somewhere welcoming Spock with a big ass joint.

@blogenfreude: The reboots just cause me to have rage blackouts, and that scene in particular completely fell flat. Original Kirk and Original Spock had a lifelong friendship, which is what gave the ending of ST II a warp speed gut punch. New Kirk and New Spock just don’t have any chemistry together, and the role reversal further mucked it up. I kept thinking “no way are they doing this, this rewrite is a huge ‘fuck you’ to long-time fans,” and then yup, they did it.

@¡Andrew!: this rewrite is a huge ‘fuck you’ to long-time fans

Okay, as someone who saw his first Star Trek episode on NBC at 8:30 on a Thursday evening, Imma gonna pull rank.

Reboot #2 was sufferable, but flat. I wasn’t enchanted. Then again, the Robert Wise Trek movie was fucking insufferable, and except for Khan, the other original-cast movies all left more than a little to be desired. (Okay, the whale movie was cute.)

And let’s not talk about the Enterprise series. I finally forced myself to watch the entire thing a year or two back. Ick. Ick ick ick. And somehow I had missed the last season of DS9. Turns out I didn’t miss anything, but a lot of grief.

“Long-time fans” have suffered through a lot, even when Gene was still running things. Comes with the territory. And if JJ hadn’t been coerced into rebooting Trek (his heart’s much more with Star Wars), there wouldn’t have been a Trek to reboot. As it stands, he’s bent over backwards to respect the canon without being stifled by it.

Reboot #2 was a misfire, pure and simple. But I’m willing to see whether Reboot #3 holds together.

I should add that I was listening to a memorial podcast today where half the participants admitted to learning the Spock raised eyebrow when they were kids. I count myself among them.

@nojo:
I would have to agree. The real genius behind TOS Trek was Gene Coon.

IMO, the Benmurga years of Trek and ossification of many Trekkies to new SF really killed the mystique of the show.

@ManchuCandidate: Years ago I read an interview with Rick Berman (Roddenberry’s successor as Trekmaster) in his office. Berman had a Roddenberry bust on his desk, with cloth tied over its eyes.

Why? asked the interviewer.

@nojo:
LOL. Considering what Berman did, he should have been the one wearing the bag over his head.

As much as I loved the show, I realize that it was all a business. Roddenberry was the first to fuck over the fans by overcharging fans for crappy trinkets (the infamous Lincoln Enterprises was his baby) and suing the shit out of anyone who made something similar (before even Lucas thought of it.)

Still, it amazes me that Lucille Ball still believed in Trek.

@nojo:
At times Gene was the Great Turd of the Galaxy.

I worked with him on a History of the Jews DVD project. Nice man. Seemed to be intelligent and modest. Only one disc was made. From time to time i get a cheque for $220 for residuals.

@Benedick:
BTW, do you still get residuals from “The Spy Who Loved Me”?

I ask only because I watched the movie recently and I think I spotted you in a scene on the submarine. It was a blink and miss it kind of thing.