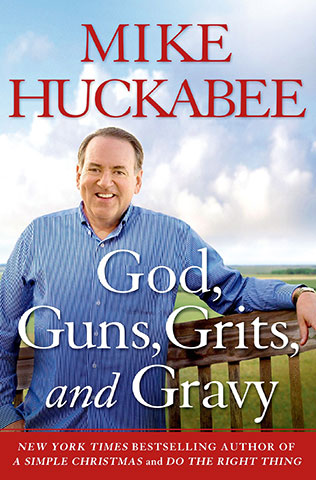 Blurb: “Mike Huckabee asks, ‘Have I been taken to a different planet than the one on which I grew up?'”

Review: “As far as Mike Huckabee is concerned this certainly isn’t the America that he grew up in. Common sense seems to be gone with the wind. Standards of decency, patriotism, religious freedom, the Second Amendment and respect for the other person’s point of view have all come under increasing attack by progressives in what he refers to as ‘Bubble-ville’ (New York, Los Angeles and Washington, DC). Why if you dare to give your child a well-deserved spanking then you might be labelled as some sort of Neanderthal. Parents are not supposed to have rules, expectations, consequences or a paddle.”

Footnote: We’re just four years younger than Nugent’s bass player, and this isn’t the America we grew up in, either. The America we grew up in was enduring a winless decade-long war, civil-rights struggles, attempts to restrict voting, resistance to healthcare expansion, venal Republican Presidential candidates—

A time/place where being a loudmouth ignoranus with really bad and dumb ideas was respected not mocked.

Book summary: “You think you’re better’n us?”
Review: Not at all. We KNOW we’re better than you, you ignorant POS.

I have grits in my pantry and homemade gravy in my freezer. I have no gun. I have no god. But I have absolute faith that we are ruled by idiots.

I had a friend was a big loudmouth asshole
back in high school
He would stomp those gay guys like a fool
Beat them till they just bled boy
Saw him the other night at this rough trade bar
I was walking past, he was walking out
We went back inside sat down had a few drinks
but all he kept talking about was

Well there’s a girl that lives up the block
back in school she could tell who was evil by the shape of their heads
Sometimes on a Friday I’ll stop by
and have a few drinks after she put her kids to bed
Her and her angel headed husband Bobby well they split up
I guess it’s twelve years gone by now
We just sit around talking about the old times,
she says when she feels like crying
she starts smiling thinking about

Now I think I’m going down to the office tonight
and I’m going to write till I get my fill
And I hope when I get old I will sit around ranting about it
and I hopefully will (get rich as fuck)
Yeah, just sitting back trying to pretend
there was some of the glory of, well time slips away
and leaves you with book shelves filed with but
fictional books of glory days

We are so blessed . . . the grifter will blow into town today with the cold front and sign “books.”

A perfect metaphor for US politics and economics–past, present, and future.

BTW, I love grits. Also hominy (for obvious reasons). Years ago I ate grits with ham and eggs, with biscuits and possibly gravy, at the Loveless Motel outside Nashville Tenn. We went back to the digs and got royally stoned. I made everyone eat pecan pie. Happy days.

Full disclosure: best grits to be had were at the Pink Teacup on Bleeker Street, NYC. Just south of Christopher. Also excellent ribs.

@Benedick: Shrimp and grits is one of those menu items (like crème brûlée, palak paneer, and pesto gnocci) that I can never pass up.

@mellbell: Oh, and ratatouille. And brussels sprouts (with or without bacon). And… well, who says that variety is the spice of life?

So, any reports of cannibalism yet?

@Benedick and mellbell: Homemade biscuits with dirty sausage gravy and a generous splashing of Tabasco are better than crack for me.