Chronicle of His Death Mistold 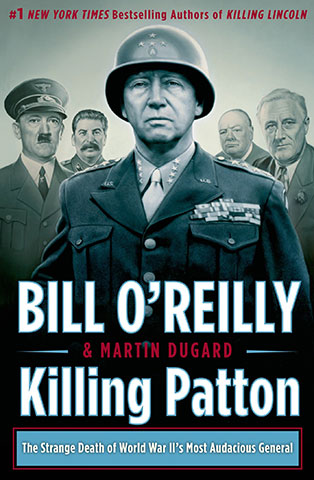 Blurb: “General George S. Patton, Jr. died under mysterious circumstances in the months following the end of World War II. For almost seventy years, there has been suspicion that his death was not an accident — and may very well have been an act of assassination.”

Review From Somebody Who Could Use a Good Slap: “They surmise that the General’s outspokenness about his controversial views on postwar security, particularly his animosity toward the Soviets, our erstwhile allies, might have made him a target for assassination. They cast a suspicious eye toward various potential culprits from Josef Stalin to wartime espionage czar ‘Wild Bill’ Donovan and a colorful OSS operative, Douglas Bazata, who claimed later in life to have murdered Patton.” —John McCain

Positive Review That Undermines the Premise: “Much of the same ground … has already been crossed before: from Josef Stalin to ‘Wild Bill’ Donovan and Douglas Bazata, an OSS operative whose story has been discredited and debunked, O’Reilly’s book seems to follow many of the threads in Robert Wilcox’s 2010 book Target: Patton — The Plot to Assassinate General George S. Patton.”

Customers Also Bought: “The REAL Benghazi Story: What the White House and Hillary Don’t Want You to Know” by Aaron Klein

Footnote: Sounds like it would make a great Oliver Stone movie.

Several years from now, when you’re sitting around your fireside with your rent boy on your knee and he asks you, “What did you write about the great World War II,” you won’t have to say, “Well… I shoveled bullshit conspiracies about Patton.”

Listen, all, something terrible has happened. I’ve become fond of Facebook.

I’m getting an ad for “Chinese-lady.com”.

@Benedick: We should report you to the CDC. Facebook is a disease far worse than Ebola, which can only kill you.

World War II’s Most Audacious General? That title would be a real stretch even you’re counting only the US Army. What’s worse, I have to seriously wonder if Bill O and his herd know there were any other nations besides the US that fought World War II. Audacity was hardly limited to one nation or even one side.

@Dave H: I strongly suspect we need to blame Patton worship on Francis Ford Coppola. If not for the movie, the General’s modern followers would be limited to the History Channel.

@Dave H:
Rommel would probably take the title for his role in beating the French, being the Desert Fox, his rear guard action against Monty in Tunisia and his stomping of the US II Corps at Kasserine Pass despite being outnumbered 3:1 which ironically led to the rise of Patton and caused US Amercia’s worst WW2 general (which is saying a lot), Lloyd Fredenhall to be summarily booted out of North Africa by Ike.

Followed closely by Brit armored genius O’Connor who wiped out the Italian Army in Libya while outnumbered 5:1. His stomping of a large Italian force forced Adolph to send Rommel and the Afrika Korps to North Africa to save the Italians.

The problem with the modern followers of Patton is that they love the symbolism and words of Patton without any of the understanding of the man himself. The guy was crazy and loved war, for sure BUT WHAT THEY LOVE ABOUT HIM (the bombast, the speeches, the medals, the blunt language) WAS ALL AN ACT! He had the voice of Mickey Mouse, not George C Scott.

He wasn’t a dilettante like Billbo and his Expendables War plan.

/read too many bios on Patton/

@ManchuCandidate: My uncle Art drove a tank for Patton at the Battle of the Bulge. He wouldn’t talk about it.

@Dodgerblue:
Don’t blame him. That Northward turn “Blood and Guts” made (and glossed over a bit during the movie) was one of the bloodiest fights in the battle.

The US Supreme Court just destroyed Opposite Marriage in five as many as eleven more states!

And the Nats live to see another NLDS game. Good news all around!

I understand that when Patton’s staff car hit the GMC truck, it went back, and to the left.

@blogenfreude: Nobody’s ever accounted for the Second Truck.

@mellbell: Looks like Lefty’s and my teams will soon be enjoying the off-season.

@nojo: WordPress has asked my to inform you that a new version is available. Dumb fucks.

@¡Andrew!: check your email, yo. Won 2 tix to see Fink at the croc. Of course I won them today and the show is tonight blah blah.

What are we talking about?

(Yeah, this 12-week intensive PTSD therapy is working like a charm.)

@JNOV: Tell WordPress that I fucking know a new version is available, but I prefer to fucking wait until the fucking bugfix update comes out.

You can also tell WordPress to stop annoying commenters.

@JNOV: I’d love to go, but I’m home sick with a gnarly cold. I’m condemned to watching The Good Wife episodes on Hulu–being a lawyer is just like that show, right?

If that’s true, congrats to our own Jaime who’s now free to marry a gal if she chooses (though Jaime, you’re straight, right?). Details, baby, details.

Opposite Marriage also has been nuked today in Alaska, Idaho, Montana, and Nevada.

Oh boy, the glassy-eyed, tongue-talking, Christo-fascist lunatics are gonna be bouncing off their rubber walls tonight.

@¡Andrew!: I’m sorry about the cough and the sniffle and the sneeze.

Watching the states fall like dominoes, Mormon Aurhorities (not the police – the dudes in charge) are apoplectic.

I might not see peace in the Middle East in myifetime, and I was hoping so much that I would, but marriage equality? I never expected to see this happen. I hope transgender antdicronation laws quickly follow. That whole ERA thing…can we revive that shit? And maybe children will start to get more than the basic protections afforded by the Bill of Rights. Also on my wish list flying cars and jet packs. Those can wait.

@Dodgerblue: Sorry about your Dodgers.

@Dodgerblue: Not so fast, slugger.

@JNOV: @¡Andrew!: Don’t forget the Alaskans, they’re part of the 9th Circuit too. I’m sure the gheyz are to blame for the clusterfuck of Palin family marriages and non-marriages. Judge Reinhardt’s opinion wasn’t as cutting as Posner’s, but it was a thing of beauty. Berzon’s additional concurrence arguing that the bans also discriminate based on gender was thought provoking.

@SanFranLefty: Did Justice Kennedy do something on this today?

@mellbell: Thanks. Highest payroll in baseball and we did worse than last year.

Not off-topic at all: she is hot.

I’m verklempt. The gays are conquering the mid-west, the south, everywhere. I never thought that in my lifetime assless chaps would be flying from statehouses coast to coast.

@Dodgerblue: I wouldn’t say that from that picture though I know the truth of your observation. She is all kinds of wondrous. (Did you catch the comments at that link?) Were I a 19 year old aesthete about to embark on his masters I think I would choose the stylings of the Obama white house. From collars, to ties (swoon) (no srsly, SWOON. The MAN is now wearing ties that match his hair. Not since Edith Head dressed Cary Grant), to suits, to state gowns, to teen apparel, to dog companions, this administration has presented us with a level of design sophistication not seen before in the republic.

@Benedick: Say what anyone will about Obama, someone taught him how to properly knot a tie. Talk about a lost art.

@SanFranLefty: I’m good at knotting a tie while walking from the parking lot to the courthouse.

@SanFranLefty: Let’s just understand: it’s not about the knot. At least, not the knot alone. It’s the exquisite proportion of the knot to the collar, the collar to the neck, the whole ensemble to the jacket. Unlike Catt, those ties don’t come cheap. The only time I’ve ever been seriously worried about our president was when he appeared in public in a collar with a gape at the neck. I don’t know: Syrians were bombing Atlantic City: who can keep up? But for the first time I wondered if our republic was in trouble. But then he appeared in the rose garden wearing a silk foulard patterned in grey and mauve that made me hope again.

@Dodgerblue: First rule: a good tie costs at least $200. It should flow over the hand like water. Or perhaps other fluids. Look, here you can rent ties to impress all your straight friends. Your welcome. Wipe before you go.

@Benedick: It should flow over the hand

Upon which I can count the number of times I’ve worn a tie in my life.

@Benedick: It’s hard to find decent ties in extra-long. I have a few Garcia ties in XL but I have to admit that they are getting pretty beat up. I have a tie with baseballs on it that I should have worn to meet Lefty for breakfast today.

@Dodgerblue: Darling. Ties to die: Sulka. We don’t wear cartoons on our ties. Talk to the nice man at Gucci. Explain about your length problem. I’m sure he’ll want to help.