They Pull a Squirrel, You Pull a Moose 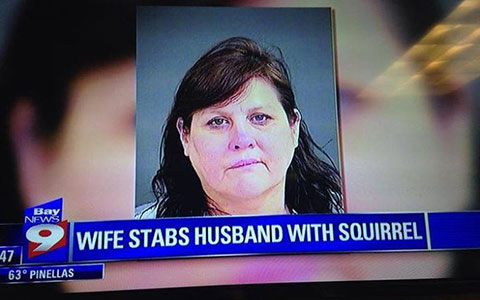 A South Carolina woman was held on a domestic abuse charge for allegedly stabbing her common-law husband with a decorative ceramic squirrel when he came home late on Christmas Eve without any beer.

Now that’s journalism: A sentence that could have happily ended after “squirrel”, but continues for three additional clauses, each topping the last. We’ve seen entire movies with less story.

Someone I know, who works in the criminal justice system, sees a lot of these types of domestic disputes. S/he and his/her colleagues may collect stories of the various, strange instruments used to assault significant others. A ceramic squirrel would not be the strangest thing they’ve heard of.

That’s a capital offense in many states.

Oh, a ceramic squirrel. I thought this was going to be a PETA-type story.

Not sure that assault is Badenov to qualify as abuse considering he came home sans beer.

There’s a difference between an event and a story, Noj. Thus qualifies as the former.

And I still want to know if the squirrel is OK. Nothing broken?

What was the squirrel’s name? Roger?

Story: Wife stabs common-law husband with ceramic squirrel when he comes home late on Christmas Eve without any beer.

If you wanna be picky, I’ll settle for “premise”.

/I mean, in case your friend is available to read and answer my question…

@SanFranLefty: You straights are so strange.

@SanFranLefty:
Wow. I wouldn’t have been shocked if she said:

“This is a .44 Magnum, the most powerful handgun in the world and will blow you head clean off, you’ve gotta ask yourself a question: “Do I feel lucky?”

@ManchuCandidate: It was a Smith & Wesson! Even I know there’s a big difference, namely that a lot of S&Ws are snub-nosed while a .44 Magnum …isn’t. That would take one hell of a holster, so to speak, to handle a .44.

There’s probably someone making a snub-nose .44 Magnum. Seems like they produce every variation under the sun in some kind of mine’s-bigger-than-yours competition. (.44 Magnum refers to the size of the ammunition.)

Snub noses in .44 Special are quite common, the Charter Arms .44 Bulldog being only one example.

The .44 Special, which is over a century old, is a very accurate round with moderate recoil. It is available with shotshell ammo (the main reason I bought the gun being to protect children & animals in a rural setting – secondary purpose being target shooting). The only time it was used was to dispatch a large rattlesnake that had moved into a neighbor’s doghouse/waterbowl.

The shotshell is only dangerous within a few feet and an absolute range of maybe twenty feet, but deadly to rats, snakes, possums while severely discouraging to raccoons, feral dogs, even wildcats – within short range.

The .44 Special loaded with traditional ammo is all that is needed for home protection, and with modern ammo can be used for short range hunting of small/medium game.

The .44 Magnum, which uses a much stronger version of a slightly lengthened .44 Special case, produces much higher firing pressures. This produces much higher projectile speeds of usually heavier projectiles. This produces much MUCH more recoil. This requires a much heavier and stronger gun to perform adequately. Too large for many people to handle & fire accurately. It also require more time for the larger amount of gunpowder (usually a slower burning type to increase the pressure) to burn, requiring a longer barrel for efficiency.

A .44 Magnum snub nose will work, but creates a massive muzzle blast/flash which will impede accuracy & followup, especially in poor lighting due to the blinding effect of the flash. It burns/wastes a large amount of powder for a far lesser improvement in ballistics compared with longer barrels. The .44 Special works far better in a snubnose than does either the .44 Magnum or the very common .357 magnum. In the real world, most owners of Magnum handguns mostly load/fire the lower power Special ammo for most purposes. They break out the .44 Magnum for fun, so visiting gun blowhards can embarrass themselves.

There is little realistic need for a handgun as powerful as the .44 Magnum for any “human relations” problem other than the gun-owner’s lack of penis size/function. It can useful for certain hunting purposes, such as a backup for dangerous animal hunting or for “trick” handgun hunting.

@jaycubed: Does it come in pink?

@Benedick: I was trying to riff on Vagina Holster without saying Vagina, and then that happened.

@Benedick: Don’t even ask about the Z-Word.

Whoa. Did ya’ll see Revenge this week? Slap me silly, I can’t believe they played the amnesia card. Though secretly I was hoping they’d have a clip show.

@¡Andrew!: I only know the show through TLo’s long since abandoned efforts at recapping it, but did see a promo for this week’s episode and was like, “Really, you guys? Really?” Unless she’s faking it, which could make for an interesting plot twist.

Speaking of TV, can Sherlock and Mad Men be on the air again already? The former is only a week and change away, but the latter doesn’t drop until April, and AMC is milking the last season for all it’s worth, with the final episodes not airing until 2015. Grr!

@Benedick: Right? If you’re gonna play “policeman” use a nightstick like a normal person.

@¡Andrew!: It’s a shame to resort to such a trope but at least they got rid of that stupid “Initiative” storyline.

@mellbell: Get ready to spend Valentine’s Day watching new episodes of House of Cards on Netflix.

@Dave H: Sounds like a Valentine’s Day better than 99% of Americans’ holiday.

@mellbell: They could’ve at least treated us to clips of the Greatest Catfights, Hunks Shirtless For No Discernible Reason, or Ladies Staring Menacingly Into The Distance.

And OMFG I can’t believe we have to wait until April for the return of Orphan Black. You could cut the suspense with a knife.

I don’t know how y’all do it. I’m still trying to fit backtobacktoback episodes of Ducky Dynasty into my viewing schedule. Don’t you just love the suspenseful plots?
The House of Cards is proving a little too tame for real politics. “My” congressman was busted for buying cocaine in DC. After a little rehab he’s back on the job doing the people’s business. What a country.

@BobCens: The original Brit House of Cards — also Netflixable — is much more fun.

And I just discovered the American version of (originally Aussie) Wilfred last night. Premise: Elijah Wood talks to a dog, who is a taller actor in a floppy-eared costume. Against all odds, it works — kind of a modern twist on Harvey.

@nojo:
I find the US Amercian version of Wilfred quite amusing. It’s got some dark humor which appeals to my soul.