Stinque
Home Latest Comments Log in
If it smells, we’re on it.
Stinque
Mastodon: @stinque@mas.to
Breaking Hard, The Gays Are Everywhere

Who would have thunk that the gheyz would be able to get hitched in Utah in any of our lifetimes? 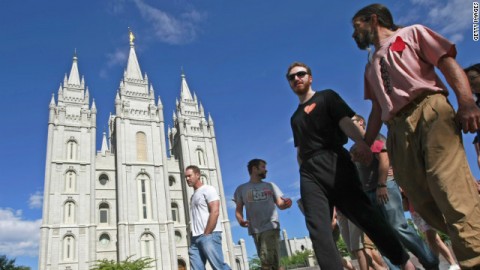 ADD: Pics of jubilant couples getting married in SLC courtesy of the SF fishwrap. Whoever is slicing onions around here, I beg you to please stop it.

ADD 2: The Mayor of Salt Lake City performing the marriage of a Utah State Senator and his now husband. My brain splats yet again. 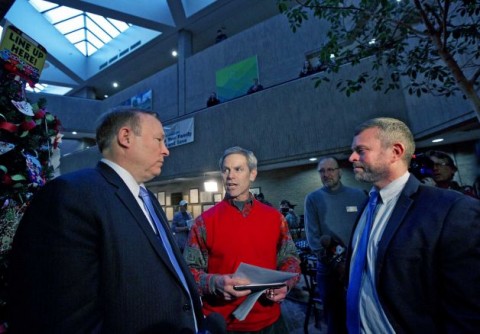 On Monday I submitted a final paper dealing in part with the proliferation of same-sex marriage and just since then two more states (with about five million folks between them) have legalized it. Unbelievable.

@mellbell: I’ve been meaning to ask what you are getting your masters in. That paper sounds interesting [god am I a policy wonk or what?] and I’d love to read it. Sounds like a professor of mine and JNOV’s who has been working for more than 10 years on a book about the history of drug laws in the US but hasn’t been able to publish it yet, because the laws are changing too quickly.

The SLC mayor vowed to stay all night as long as there are couples wanting to marry.

@Mistress Cynica: I do question WTF the SLC mayor is wearing there. Obviously the gays’ influence isn’t strong enough to stop that shitshow of red holiday sweater frivolity.

@SanFranLefty: We can’t do every damn thing. It is Utah after all.

Meanwhile in Uganda shit is getting real. Life imprisonment. There goes the long hoped-for coffee industry.

http://www.boxturtlebulletin.com/ (scroll down. I’m too weak)

And no doubt we’ve all seen this. http://www.rightwingwatch.org/content/what-persecution-looks

The exmormon board is exploding. I’d say 98% positive or the posters are self-selecting. My favorite is how when people start talking about the “polygamy slippery slope,” some folks are saying, “Hey! I’m gay and my GGrandfather was a fucking polygamist. Here’s how they are completely different issues…”

@Benedick: I can’t click on those. What does that say about me? There’s so much horrible in this world that it overwhelms me, and I look away.

In my lifetime, too. I never thought I would see this even in one state.

We need to do something about Uganda, though…

Mr. ¡A! and I finally set a date. We’re gettin’ hitched at the courthouse on Friday, January 3rd–we’ll be New Year’s grooms! The judge presiding over our service is Mary Yu (no joke). Seems weird since we’ve been together already for 15 years, but I’m grateful for the opportunity.

I went to college with the girlfriend of the SLC mayor.

“What do you do when your foundation falls apart? I don’t know. They don’t teach you that in [primary].”

Y’all know they kinda sorta apologized for BY’s racism, right? It’s been a weird couple of weeks. I wonder if they’ll rename The Lard’s University.

@JNOV: “I used to be known for interesting comedic performances before I was typecast as Shaggy.”

@Benedick: Speaking of agents…”Pages. The Last Word in Word Processing”

@JNOV: NB to Josh Gad: Do not remake Gilligan’s Island.

It makes me all warm inside that the state where the Mormon money came from that financed Prop 8 now has same-sex marriage. Fuck those people.

@blogenfreude: Well, the ban on SSM in UT came from a referendum, so…I dunno. Apparently the state legislature got a little pissed off about the referendum process in general (not necessarily because of SSM), and they clamped down. Which is rich considering Prop H8, but future referendums will be difficult to get to a vote.

I’m sure TSCC (The So-called Church) has had briefs at the ready for years in case this happens. They probably polished them when an Obama appointee ended up in Utard. I’m glad this bomb was dropped on Friday and clerks got called in from vacation to work.

However, in Provo (that’s where YBU is), the county clerk is refusing to issue licenses, soooooo. I see deep doo doo ahead.

The cool thing is if the appellate court upholds and SCOTUS doesn’t grant cert., we’re no longer talking about only Utard anymore. We’re talking about Oklahoma, Kansas, New Mexico (not necessary, but), Colorado, Wyoming, plus those portions of the Yellowstone National Park extending into Montana and Idaho.

The Morridor consists of ID, UT and AZ. AZ and NV will probably go next.

A good place for info. Weber is open today for a couple of hours, and the Ogden mayor is marrying people.

Apple support guy is coming for Christmas. We spent so much time chatting we finally got around to exchanging pics and turns out he likes long walks beside reservoirs, fireside chats, and pugs.

@blogenfreude: Not that kind of cracker. Oh wait.

@Benedick: I hope they can recover your work. Did you save it on a floppy?

@Benedick: Do you have a previous version of Pages still available?

If you upgraded, it should (might?) still be there in the folder “iWork ’08” or “iWork ’09”. It’s as if Apple knew there would be problems with the new version. Starting with missing functionality.

Meanwhile, Dog Beach Mail still sucks with Gmail, even after this week’s update.

@nojo: That’s what’s crashing. Since the upgrade. I can’t use Pages 5 on account of how most of the features that make it work for me have been removed. I am beginning to suspect a conflict with Aperture. Seriously.

GAH! nojo, what’s the name of the tv show or movie or something when everyone wakes up one day and the help is gone and folks are all confused and trash piles up, etc.? I think the help were zapped up into a spaceship.

@Benedick: What’s this business about elves?

@JNOV: A Day Without a Mexican?

@nojo: That’s the same idea, but I don’t think I saw that. Gah! I could have sworn I saw it a long time ago and that it was shot in black and white. Meh.

Speaking of freezing over, major ice storm hit town. Wisely decided not to go out tonight. Better to stay home and freeze in the dark thanks to power outages than sliding off the road thanks to a couple of inches of ice.

@Benedick: Mr. Catt did a bunch of environments and props on that.

@Tommmcatt Says Pull My Finger: Well, duh. I’m not completely senile. Hence my suggestion for a drinking game. Do you expect me to drink vodka for no reason? Plus Santa.

Just bought insurance through the NY exchange that will save me about $4,000 a year with no deductible. Plus I keep my (fab) doctor. Plus I can pay monthly instead of making giant quarterly payments. Socialism makes me smile.

@Tommmcatt Says Pull My Finger: Is that the one Amazon yanked because Disney didn’t want people who “owned” it to actually watch it?

@Benedick: Finally wrapped up the California exchange business the other day. Very confusing, which I was only able to decipher because (a) I’m a geek, and thus (b) I could guess what they meant, as opposed to what they said.

But those are all Launch Issues. I could also see things clearing up over the time I rassled with it.

@Benedick: Oh, I thought you you having another senior moment. Like when we have to remind you what your keys are for.

I must say the Clevand airport is much nicer than one might expect.

We should live-bloog the episode though. It would be fun. Speaking of fun, here’s a fun fact: I secretly think that Mr. Catt looks like the lead elf in that cartoon. Something about the nose…

@¡Andrew!: Yay! Did you crazee boys register somewhere? Maybe you’d like a pair of underpants or a dog bowl with the Stinque logo on it?

@Tommmcatt Says Pull My Finger: Thanx doll! It’s been a good one so far!

@Tommmcatt Says Pull My Finger: Yeah, it’s the nose. That’s what it is.

Plus: Cleveland is Divine!

@SanFranLefty: Happy birthday. Enjoy it while you can still count.

That damn temple makes me think of an ashtray. When I saw it in the flesh I couldn’t think at first why it looks so weird. Then I realized that unlike most other Disney Gothic buildings its perspective doesn’t lead the eye upwards. Those damn windows are the same size at the top as the bottom. So the whole thing kind of looks squat; it just sits there instead of moving upwards. Then it struck me that I was thinking of those novelty ash-trays one used to see of various famous buildings that had a opening at the bottom in which to stick your ciggie so the smoke could rise from the top. They had the same squat look and lack of perspective.

We’re not registered anywhere–these traditions are so new for us! I am gonna change my last name though and stick it to the patriarchy in reverse.*

*Hey that’s what got me into this in the first place! (Badumching!)

@SanFranLefty:
Happy belated B-day. I hope you get two sets of presents.

@¡Andrew!: Keep sticking it to the patriarchy. And if you want to send me a private message, let me know where I can send a bottle of tasty bubbly to the adorable couple (and an appropriate “your daddies are getting married” present for the bean).

Rumor has it that PNW Stinquers may be at the wedding; since I didn’t get enough notice, I’ll send alcohol and gifts for 10 year old, said presents will be better behaved guests than I am.

P.S. Though if baked were still with us, I would totally want her to be my date at your wedding. /RIP

@Benedick: Have you seen the one in DC? Someone has been painting, “Surrender Dorothy!” on Beltway overpasses. It’s a fine tradition. http://www.washingtonpost.com/local/surrender-dorothy-painted-on-a-beltway-overpass–whats-the-story/2011/06/23/AGduf6kH_story.html (Kittens on keyboard typing. Chewed through power cords, ear buds (mine and Steve’s), now use track pad. I’m so proud.)

@SanFranLefty: Last week was your birthday! Happy last week to you!