Stinque
Home Latest Comments Log in
If it smells, we’re on it.
Stinque
Mastodon: @stinque@mas.to
America the Beautiful

Who Would Fardels Bear? 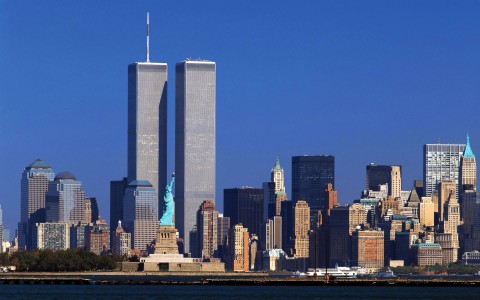 As mentioned before, I was in the city that day. I was riding a train in from Long Island as I was staying at my mother’s. I didn’t have a cellphone then but people were already aware of something bad having happened by the time I changed trains at Jamaica to complete the journey to Penn Station. From Jamaica you could see the towers. One of them had a huge plume of black smoke going up from it. In the train I said, Look at that! Maybe four did, looking up from their papers.

It was my second day of rehearsals for a new musical so of course there was no question of delaying or staying home. Because if the show doesn’t go on the terrorists have won.

What I remember most are images of the triage station set up outside St Vincent’s, all the way down 10th (?) street. A station to which no survivors were brought. And the signs everywhere, on lampposts and walls, pictures of missing fathers, husbands, daughters, wives – all asking, Have you seen this person? And of course we hadn’t and never would again. The pictures stayed for weeks. No one wanted to take them down. In the main concourse of the Times Square subway one whole wall was pictures: Have you seen… ? Any information about… ? Reward for my wife’s… Please help me find…

And the fire houses with flowers banked five and six feet deep against the doors. Because so many firemen were killed that day.

The attack was Tuesday, our second day of rehearsal. I went down to the Village that Friday to see a cast mate performing his own songs in a cabaret and it was right beside a firehouse that had lost almost all of its crew and the flowers were so deep you had to walk in the street. All through that week and the next the city was deserted, haunted, smoke everywhere; the plume changing from black to ashen, hanging over downtown. You could smell it everywhere. New Yorkers were quiet, the city went about its business, people were remarkably calm and sensible. I was going in all that week and for the following two weeks. Then we went to Cleveland for what was supposed to be our out-of-town tryout. We never came in. Two years later it was produced off-Broadway and I turned it down.

What I don’t really understand is the fetishizing that’s gone on. I thought the buildings were very beautiful. In their original design they would have eclipsed the Statue of Liberty standing as two pillars of light at New York’s harbor. If you haven’t ever arrived at New York by sea it’s perhaps hard to comprehend the drama of that arriving. Sailing under the Verrazano Bridge, when you think the Queen Mary won’t make it, then into the great open expanse of the bay. Past Liberty Island and up the Hudson with Manhattan blooming, glowing, right there level with D deck. Transatlantic liners used to put in at the piers in mid-town; the Cunarders docked at 52nd street. As the ships came up the river you could see right across the island along the cross streets – 34th seemed wide open and if you were arriving in the early morning the sun would be climbing behind the skyscrapers. That’s how it was when we came back in ’77. Whatever happened next you sure knew you’d arrived Someplace. But the light pillar idea got revised when the first oil crisis hit and they installed light switches. Even so, they were beautiful buildings. I always took out-of-towners to the top. As much for the thrill of riding that elevator to the sky as for the view when you got there. Visiting offices you’d gasp as the elevator doors opened on a vast expanse with nothing to hold it up. No columns, no walls. As soon as I saw the buildings collapsing on a jumbotron on 42nd street I understood why.

When I fled the country in ’69 on the S.S. New Amsterdam the Trade Center towers were under construction. We sailed right past them. A fire was raging through several storeys.

That September day, as I remember, the streets were crowded with people stranded, Grand Central and Pennsylvania Station were closed, the subway was closed; fighter planes were flying low overhead. Cell towers had gone down with the Trade Center, there were long lines at pay phones – note to youth: we had pay phones then. You put coins in slots. Coins were round metal slugs. As actors are intrinsically useless we were finally sent home though there was a certain nervousness among the dancers that once we could well be the next target. Which prompted me to wonder if the revival of 42nd Street would be high on any terrorist’s list of targets.

Thousands of people were outside Penn Station waiting for it to reopen. Which it did around 2, as I remember. I was very lucky. I got the first train out.

The last day we were in the city, after rehearsal I went down to where the Trade Center had been – and of course there was much more damage than just those buildings. The devastation was spread over many city blocks. I got as close as I could to see it. Recently, riding the bus down from north west of the city to have a lunch I didn’t need with people I didn’t like we entered from the Jersey side through the Lincoln Tunnel. The approach to the tunnel is a long curving ramp from which you see the city in its glory across the river. The new tower gives the downtown/Wall Street area the look of a pyramid. It’s pretty sensational. And it’s good to have that absence filled.

Writing this out – what was intended to be a quick reply to Catt – if you’re going to comment while wearing assless chaps for God’s sake put a towel on the chair – has made me wonder at my impatience over the often lamentable lamentations each 9/11 since.

I don’t understand why Americans are supposed to behave better than any other nation. As I’ve remarked before, I find Americans open-hearted and generous. Some of our institutions leave something to be desired but the same is true anywhere. What was and remains tragic is that the horrible fact of that day, I think we can all agree it was horrible and no, I’m not forgetting DC or that plane brought down in a field I just wasn’t a witness to those events, is that the fact of that day was used so cynically to take the country into a war that should never have happened. So the misery of that day was eclipsed by the untold misery of our invasion of Iraq.

If you’re interested here is a very good account of that day. Apart from the ‘We’re All Victims’ nonsense. I’ve never understood why residents of Ohio, Nebraska, Colorado, Kuala Lumpur, etc, should have been rendered helpless by anxiety after the attacks. As I said to the dancers afraid to leave the studios on 42nd street: You think Podunk is next?

The Podunkites certainly thought Podunk was next, and that’s all Bush needed to sell us a war.

In the wake of the attacks on the Boston Marathon and the World Trade Center, an outpouring of financial aid for the victims expressed a belief that their suffering was a sacrament of our democracy. Yet Sarah Collins Rudolph — maimed by native-born terrorists in our nation’s great internal freedom struggle — has been expected to deal with protracted medical and cosmetic issues [she lost her eye], to say nothing of other forms of anguish, on a domestic worker’s wages.

@JNOV: We get the Atlantic. That’s about the best account of The Speech I’ve yet read. The Times piece is sensational and I hadn’t seen it before.

Same reason why podunk areas have always been for ages. Do the majority of them pay attention to the news? Travel outside of their own podunk places? Meet a non-podunkian? The podunkians that do are ignored because they are smart or well read so that makes the rest feel uncomfortable/small/ignorant. 9/11 brought the world to them with the same intensity as a punch to the gut. Instead of trying to understand why it happened they defaulted to self centered dumbass podunk-think which is “Podunk is JUST AS IMPORTANT AS NEW YORK CITY! WE’RE NEXT!!! THEY GONNA KILL THE WALMART!!!”

There’s a reason why most people who get itchy feet to see the world leaves podunk for the bright lights of the city and later the dimmer lights of suburbia. Podunk can really be a small world dominated by small minds.

I knew Podunk quite well as 25 some odd years ago my family left the small rural town I spent my childhood in and I’ve never went back.

The Boy turns 24 tomorrow, and we no longer speak the same language.

Humble Bundle. You can't buy it as a surprise gift. It just doesn't work.

@JNOV: You will again. It just takes time.

@Benedick: XD At least we still talk. If I kidnap him for a road trip, we communicate, even if we’re arguing over whose turn it is to pick the next song.

I think I’ll take him to Spokane. Lots of pretty out there.

Hey — I was watching a documentary about wind power and Meredith, NY. I thought of you.

I was in a taxi when the second plane hit. Driver and I just looked at each other – he was Afghani. I really remember the indescribable smell of the wind blowing up from downtown that night.