Stinque
Home Latest Comments Log in
If it smells, we’re on it.
Stinque
Mastodon: @stinque@mas.to
The Gays Are Everywhere

To the awesomeness that is her highness Ms. Tilda Swinton. 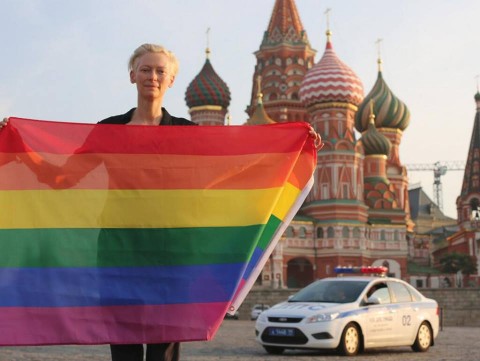 The passing of Russia’s so-called “gay propaganda” legislation, which was recently signed into law by President Vladimir Putin and bans public LGBT demonstrations and discussions, means Swinton could face a jail sentence of 15 days and deportation for simply posing with a rainbow flag in public according to the new law.

The newly adopted antigay legislation also states any individual using mass media or the Internet to share information about LGBT identities can be subject to fines up to 100,000 rubles ($3,050 USD), while officials are subject to fines twice that amount, and legal entities face a 1 million ruble fine or 90-day suspension for discussing LGBT people.

In related news, did y’all know that it’s Ex-Gay Pride Month? There’s going to be a banquet and everything.

So beautiful. Almost like a superior alien creature or an angel.

@mellbell: They are really getting desperate, aren’t they? Yesterday I cought ol’ Bill O at the gym, and he was trotting out that case of an American Preacher jailed in England because he broke their public encitement laws during an anti-gay rant. The case is several years old.

And if you haven’t seen Orlando, do so.

Lesbian dating site in the NotMSNBC ad on the left, “Guns Don’t Kill People” t-shirts through the Amazon linque on the right. \hmm/

She is a goddess.

I’m undergoing a crise de nerfs. I know, I know. Again? you cry. Whatever.

I’m sick to death of the gays. Nothing is ever good enough. We just won a colossal repudiation from Lionsgate of some nitwit who wrote a crappy sci-fi novel that has been taken up by 12 year old boys and now is a crappy movie about to be unleashed in, I daresay, 3D Vomitscope on an unsuspecting public. Plus, writer was on board of NOM and wrote a lot of ridiculous garbage way back when. A bunch of gay geeks have called for a boycott. Not because there’s anything offensive about the movie itself but because of said writer’s past writings when not writing about bug-people and plucky little boys. Meantime, having no comprehension of how movie finances work and who gets paid for what when, they’re all plotting how to go to the multiplex to a buy a ticket to a movie they don’t want to see then sneak into Enders Game so the bad guy doesn’t get the 15 cents from their ticket price they imagine he’ll carry gloating to his bat-cave. So it’s a boycott with a happy ending. Anyhow. The gays are all up in arms about it. Outrage is a powerful narcotic. You tell people: we won! Shut the fuck up. Get me drunk and have your way with me. And they’re all like, Oh yeah? Tell that to Matthew Shepherd.

Now, what’s going on in Russia; the Winter Games; the severe and increasing suppression of LGBT people – let’s get outraged about that. (Picture above makes me want to punch her and not just because of her acting skills. Apart from my opinions I am not a violent man. And yes, I know you dear sweet funny people love your slebs) But dear Christ Almighty! A movie no one* will see based on a book no one* has read (*no one I know).

Give me a motherfucking break.

@Benedick:
You know one person (sort of.) I read it when I was 16. It’s not bad, but the idea that super geniuz kids make great military commanders made me laugh as I got older. A lot.

Also, Orson Scott Card has some issues. He also spends more words than necessary writing details about boys in the shower (not joking) in the novel. It is kind of creepy.

However, I hope that that part is not in the movie.

But then you grow up. And you realize that movies like this are made for that boy you were, the one with one hand under the covers as you read the new Batman. (Big debate among the gays: Batman or Robin? I am agnostic) Will the basement fanboys turn out to blow $20 on a 3D IMAX experience in enough numbers to counteract the revulsion of the thinking world?

I’m about to go ex-gay. I could divorce the hub. There are wimminz I could marry. I am a long-time fan of vaginas. Up to a point. We could shop for wallpaper. Baked would understand.

I don’t want to belong to a persecuted minority if it doesn’t have a sense of HUMOR.

ADD: I have come to hate my people. (Not Catt. Srsly. Send the pics)

@Benedick:
Will the basement fanboys turn out to blow $20 on a 3D IMAX experience in enough numbers to counteract the revulsion of the thinking world?

SF and or comic book nerds are not exactly the best barometer of what is a good story or not.

BTW, it’s probably why we get along. I’m a weirdo among “my” people too.

@ManchuCandidate: I’m not so much weirdo as old.

@Benedick and ManchuCandidate: I have no idea of what you speak in the code that non-SyFy geeks can understand.

Speaking of which, I understand there was something on teevee that involved…sharks in a tornado – please ‘splain?

@Benedick: I want to be supportive and outraged on your behalf, darling. And you know I would be.

But I don’t understand anything that you wrote. Could you pretty please dumb this down for those of us whose brains have been fried by the Arizona desert?

@SanFranLefty:
Sigh Feh or SyFy channel produced a really godawful movie about sharks and tornadoes in the style of B-movies.

@TJ/ Jamie Sommers /TJ: @SanFranLefty:
The movie is Ender’s Game based on an award winning novel by Orson Scott Card. It is about an interstellar war between humanity and a race of alien insects known as the Formics but more commonly known as the buggers. It has a M. Night Shamalan twist ending. It was Orson’s first and best book. I’ve tried to read his other books but they’re quite shitty. The hero of the story is a warped un-possible 10 year old military genius named Ender Wiggin who can kill bigger kids even though he’s never had any formal hand to hand combat training.

Orson Scott Card is also one of the biggest (if not the biggest) homophobes in SF. He’s written about a lot of stupid shit screaming about ghey secks. He’s also a Mormon which explains why he’s all about procreation and has a disdain for birth control in his SF novels. The novel is also noted for the rather creepy child nudity and shower scene.

There is a $200 million (I think) budgeted movie coming out very soon. I don’t know how well this is going to be received by the general public. Judging by your reactions I think not well.

@TJ/ Jamie Sommers /TJ: I will when I’m not consumed by contempt for the idiocy of this ‘campaign’. I warn you, it’s like children holding their breath till their face turns blue.