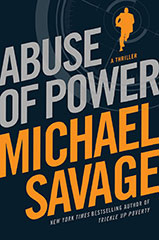 Blurb: “Jack Hatfield is a hardened former war correspondent who rose to national prominence for his insightful, provocative commentary. But after being smeared as a bigot and extremist by a radical leftist media-watchdog group, he ultimately loses his job and finds himself working in obscurity as a freelance news producer in San Francisco.”

Review: “I consider myself conservative, but I grew a bit fatigued being beaten over the head repeatedly with political views.”

Customers Also Bought: Nineteen other books by Michael Savage, and one by Mike Lee.

Footnote: With the price so low, you can buy multiple copies and throw them out as the pages stick together from jacking off to radical leftist media-watchdog groups getting their comeuppance.

It’s funny because Mike Weiner is almost none of those things that he describes his alter ego as. I guess it is implied that Jack has a massive 24 inch cock, is a ladies man that puts James Bond to shame, has black belts in 50 different martial arts, can fly any plane, drive like a NASCAR driver (ie: turns left at 200mph) and is a marathon runner who only gets 4 hours of sleep a night.

Love those “media watchdog groups” that merely hold up a mirror to conservative misbehavior.

@blogenfreude: Not “merely” — Media Matters, ThinkProgress and RightWingWatch are more than capable of pandering and self-caricature. But that’s not a critique available to professional wingnut charlatans.

“Radical Leftist” has no meaning today, nor is it supposed to. It’s merely a canned smear intended to tie polite progessives with the Weathermen, Black Panthers, SDS, and other bogeymen from a half-century ago. Some day America will outlive the Sixties, but not yet.

@nojo: Today’s radical leftists go to town halls and shout at senators. It’s like the movement got an AARP card and needs frequent afternoon naps.

@Tommmcatt Can’t Believe He Ate The Whole Thing: I used to nap. A lot. But that was thirty years ago. When I was in my twenties.

Still have those multiple AARP invites, however. Memento Mori.

@Tommmcatt Can’t Believe He Ate The Whole Thing: You have the ET Adult Swim feed? Fuck you.

@nojo: yah, mostly for stuff like this. Oddly enough, I really feel like VB just hit its stride… the comedy and action are now seamless- one supports the other.

T-shirts suck this week, though.

Meanwhile, although I was MIA on Chicago and doubt my mom was an Avon Gal, Get Smart and Carnation Instant Breakfast defined 68 for me.

@Beggars Biscuit: I remember Bobby and MLK, but totally blank on Chicago.

Oh, and you forgot Laugh-In. They have three episodes to squeeze in the Nixon cameo.

I should email NojoBro. He would have been conceived around the next episode.