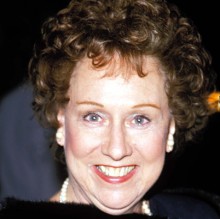 Ah, God bless her. Huge part of my childhood.

Are you sure she didn’t die three years ago?

@Tommmcatt Can’t Believe He Ate The Whole Thing: Do you remember the theme song?

(“Those Were the Days” by Charles Stouse and Lee Adams)

“Boy, the way Glen Miller played. Songs that made the Hit Parade. Guys like us, we had it made. Those were the days! Didn’t need no welfare state. Everybody pulled his weight Gee, our old LaSalle (a car) ran great. Those were the days! And you knew where you were then! Girls were girls and men were men. Mister, we could use a man like Herbert Hoover again. People seemed to be content. Fifty dollars paid the rent. Freaks were in a circus tent. Those were the days! Take a little Sunday spin, go to watch the Dodgers win. Have yourself a dandy day that cost you under a fin (five dollar bill). Hair was short and skirts were long. Kate Smith really sold a song. I don’t know just what went wrong! Those Were the Days!”

Sappy clap-trap to keep the viewer stupid and sell them shit they didn’t need, what a waste of technology tv was and still is.

@tomfoolery: I think it was meant to show that Archie was a megabigot, life was moving on with or without him, and that the memory of *those* days is really a fantasy.

Impressive recall and snowflake, my friend.

@tomfoolery: from the net

Boy the way Glenn Miller played!
Songs that made the Hit Parade!
Guys like us, we had it made!
Those were the days!

And you knew who you were then,
Girls were girls and men were men.
Mister we could use a man
like Herbert Hoover again!

Didn’t need no welfare state.
Everybody pulled his weight.
Gee, our old LaSalle ran great.
Those were the days!

And, cut to commercial.

That’s all that was ever broadcast, and even twelve-year-old Nojo could hear the dripping irony.

Archie, you might recall — although apparently you don’t — was a bigot, and portrayed as such. The show itself was not Happy Days pabulum, but a highly arch take on the changes in American society in 1971 — something that was not done in network primetime. (And not done in late-night until SNL debuted four years later.) It was almost like CBS asking forgiveness for canceling the Smothers Brothers.

The broader irony — noted at the time — was that some viewers identified with Archie, who was clearly a caricature of knee-jerk bigotry, but also human. But to be fair, Rob Reiner’s son-in-law Meathead was himself a caricature of hippie liberalism. All in the Family was Crossfire with a storyline and better jokes.

Also, for better or worse, All in the Family introduced the concept of the Very Special Episode, when Jean Stapleton’s Edith went through menopause.

If Norman Lear was trying to keep the viewer stupid, he wasn’t doing it very well. It wasn’t much later when Maude had an abortion.

I actually met Norman Lear when he was showing off his copy of that Declaration of Independence at the local Barnes and Noble. We shared a moment when two kids next to us were all “Who’s Norman Lear?”. I waited until hey left and said “Mr. Lear, I know who you are. Thanks for all the laughs.” He smiled, we laughed, and I went on my way.

@nojo: I don’t remember Archie ever getting out of his chair, lazy bastid.

@JNOV: He got out of his chair for Sammy Davis Jr.

Oddly, the episode I remember most is Archie turning fifty. For years, the vision of gray, balding Carroll O’Connor was what I thought fifty was about. And now that I’m four years beyond, I look nothing like that.

On the other hand, a recent photo of a high-school reunion is nothing but depressing.

The two memorable AitF episodes for me were the one with Cleavon Little playing the robber who had witty answers for both Archie and the Meathead, and the one where Edith fought off the would-be rapist.

The first one was awkward in that the viewing audience had Race™ grab it by the throat and not let go without a tidy ending. The second one had my heart racing for Edith’s safety (and cheering like hell when she kicked his ass).

Anyone seen the Brit original Till Death us do Part?