Stinque
Home Latest Comments Log in
If it smells, we’re on it.
Stinque
Mastodon: @stinque@mas.to
NYC 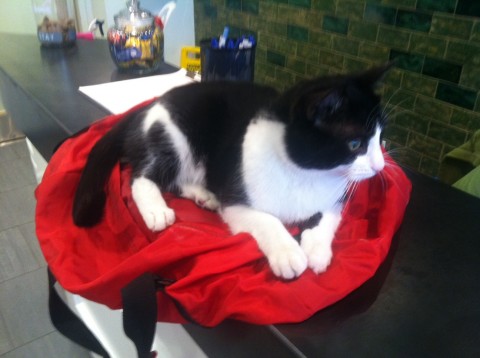 This is Stilts. He is 18 months old. He lived at my vet’s office until last week, when he found a home.

Stilts wound up at the vet when a 10 year old threw him out the window because he did not come when called. His back legs were broken to the extent that he almost lost one of them.

The vet put him back together. He now walks normally, and I saw him jump onto a 4 foot high counter with no problem.

We had to put our cat Lili down 2 weeks ago Friday. On Sunday, I went to the vet to donate Lili’s prescription food, a leftover bag of Ringers solution, needles, snacks, etc. A few cats live at CityVet, so they can use the stuff. As shown in the photo, Stilts jumped onto the counter and sat down in my bag.

A few people had applied to adopt Stilts but were turned down because they were deemed “not responsible.” That Sunday we applied, then later in the day decided it was too soon, so we withdrew. The following Wednesday my girlfriend said “we should get that cat.” We applied again. We were approved, but we were second in line. The tech who saved his life took him home to see if he got along with her 2 cats.

He did. Either outcome would have been great for him, but the tech can 1) monitor his health, and 2) take him to work once in a while to see his buddies. He’s set for life.

Dearest. It’s never too soon. The more you love the more you need to love. When we thought pug 1 had been mortally wounded and dragged herself off into the woods to die we went out next morning to find another puppy. As a tribute to her. Of course the bitch showed up middle of next night and has been impossible ever since. It’s the same with people who have very happy marriages: when you lose your wife you want to marry again. When you lose your husband check out the competition at Hooters.

It’s all about love.

Plus, are we more engaged with animals who are more needful of our care? Like boyfriends. They fall down stairs. Light themselves on fire. Shove Coke bottles up their ass – OK, only certain kinds of boyfriends do that. Do we love them in spite of their foibles or because of them?

But yeah, find a pussy you can adore, man.

@Benedick: we went to 86th and Lex Petco cat adoption today, but nothing clicked. Lili clicked with me when I adopted her and clicked with Noriko when she met her 8 years ago.

I love this story.

All of us can relate to the loss (and then the new love) that goes along with loving a creature whose lifespan is generally far less than our own (if we live as long as we’d like to, anyway).

George Carlin said of dogs: “When you get a dog, you’re also getting a little tragedy.” Applies to all furry and feathered friends, I think. Even ones with scales, as my brother-in-law’s iguana was.

But cats are special. They require, and give, the kind of love that is intellectual and demanding (in most cases). What a good kind of love to have in one’s life.

What a good kind of love you shared with Lili. What a selfless love you both expressed toward Stilts.

I am so, so sorry about Lili’s passing.

A cat, or cats, will be choosing you shortly.

@blogenfreude: Good. You’re looking. Good for you. Honor Lili. You’ll find your perfect pussy (forgive me, yes I am that childish).

My vet has lovely rescues they don’t allow any but we the most favored customers to see. I’ll call and see what they have in the way of helpless ravishment. I can take pictures. Any specs? Age? Color? Birks?

@blogenfreude: I’d go with kittens. Building on my experience with p/gs and d/shunds. Think families. Wouldn’t you have been happier if you’d had bros? Or if your bros weren’t assholes?

We strive to give our animal companions the life we never had.

@Benedick: one sister, no brothers – an older brother to school me would have been nice. I was the oldest, so the first to come home drunk, the first to dent dad’s car, the first to get caught trying to get my hand under a girls’ shirt … damn, I was a pioneer.

@blogenfreude: Older siblings are the best. Especially when you’re the youngest of four with a single parent. By the time I hit the terrible teens, my dad was exhausted.

@blogenfreude: Which is why you grew up gay. And whatever.

Plus cats. The poor man’s dog.

Hello my darlings! So much to share but I’ll be damned if I’m going to on this haunted phone. New computer ready tomorrow (I’m hard on my toys) I got a text an hour ago–“tell me about your cats” yep, Bloggie saw my plea to the universe for a great home for the pussycats. Fingers crossed…more to come when I get the computer..
Love you guys, plan to come home soon.

@baked: Hard on my toys? Where to begin?

I’m dogless now but I sometimes have playdates with a friend’s dog where the dog will tear around my back yard until exhausted and then take a snooze curled up next to me on the couch. Then my wife comes home and complains about muddy footprints in the kitchen. It’s worth it.

When I have more than a thumb to explain why I must part with my beloved cats I will…teaser:
Bakette had a baby who is allergic.
We took an apt in Philly, where baby bakette is. for 6 months there and 6 months in T&C. Ratbastard jr will keep Bella for us when in Philly.

I am a snowbird
I am a bubbie
I am old

After my Gwydion died, nothing made me smile until I saw a beautiful kitten at the pet rescue adoption event at the farmers’ market. I brought little Ophelia home, and decided after a couple of weeks that she needed a companion, so I went back to the pet rescue and adopted Tybalt. They are adorable together and enjoy each other so much. Highly recommend two. It would be so lovely if the bloggie/baked kitty adoption worked out.