Stinque
Home Latest Comments Log in
If it smells, we’re on it.
Stinque
Mastodon: @stinque@mas.to
The Final Frontier

Will They Be Using Live Ammo? 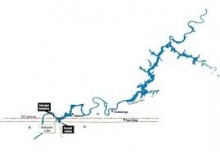 “Georgia’s Senate has voted 48-2 to shift the state’s northern border to include a sliver of land it says was wrongly given to Tennessee by a surveyor’s blunder in 1818. Georgia says the “mismarked boundary lines” have denied it access to the Tennessee River as a source of water and it says it will take its northern neighbor to court if it doesn’t agree to surrender a slice of land big enough to allow it to do so, reports the Chattanooga Times Free Press.” [Newser]

And so it begins.

Wasn’t prayer enough to get water for Georgia? Or maybe that whole deregulation thing isn’t really working as many streams/rivers are polluted by runoff which isn’t really regulated?

BTW, it is also a problem here in water soaked Ontario as companies/citizens (especially the rich ones) want access to clean water but really don’t want to pay for it.

Our teapublican’t allegislators who proudly boast of the super majority they hold in the state house and senate here in Rockytopistan haven’t gotten round to answering the Georgia threat yet. They have been too busy lately making sure the home schooled can play sports at the local heathen high school, deciding whether or not to allow wine sales in grocery stores, making the county school superintendent position an elected post, and of course the most important teapublican’t issue: finding more unconstitutional ways to prevent Tennesseans from having access to health insurance. You know all the job creatin’ and economy fixin’ thangs. However, a few of the teapublican’t mensa society members have come up with what they feel is an adequate solution for the Peach State. They have suggested that the Georgians build desalinization plants down on the little tiny bit of coastline that separates South Carolina and Florida. I don’t have a dawg in this fight because my water comes from the Clinch River reservoir all the way down from strip mined Virginia coal fields and is filtered through the Oak Ridge nuclear facilities before I tap it. It does contain fluoride though, something my neighbors in the Smokies want to do away with:
http://www.knoxnews.com/news/2013/mar/24/blount-county-utility-to-put-fate-of-fluoridated/?partner=RSS
The picture is NOT photoshopped. The fluoride free, gender neutral sign holder really is missing a tooth. Of course the other guy is a teabagger, but he spelled the words on his sign correctly. somehow.

That was the high point in the combat phase of the perpetual water war between Arizona and California. May we hope for something similar from this conflagration?

@ManchuCandidate: toof, but only on the side we can see. wait till we have elected school supers here in tennessee. the science teachers in oak ridge, tennessee’s highest performing science students, are mystified at the arguments they face from the children of teabaggers, snake handlers, and tongue speakers here bouts:
http://www.knoxnews.com/news/2013/mar/21/climate-of-denial-intimidating-for-science-told/

@Walking Still: if it comes to the natl guards fighting it out, it’s going to be bad. there are many natl guard units in east tennessee and northern georgia. iraq was especially bad for them because the units were practically all heavy equipment mechanics, combat engineers, and medical units. in other words, magnets and medics for the IEDs on repeated tours. knoxnews did a feature sunday on the PTSD vets and walking wounded. hopefully water won’t generate the casualties that oil and crooked politicians did.

It’s quite sad/funny/pathetic that the Fundies want to deny the very science that created Oak Ridge 70 years ago.

“Wasn’t prayer enough to get water for Georgia? ”

My guess is that the next salvo in the upcoming skirmish will be for the GA legislature to declare that all future Georgia Textbooks must refer to the Tennessee river as the “Georgia River.” And no doubt Tennessee will declare that strip of land as the very place where Jack Daniels ascended to Heaven and Dolly Parton got her boobs.

@Serolf Divad: The Tennessee river and its tributaries flow by all three places where Davy Crockett was born.

@jwmcsame: Wow! Davy was born in three places (got to love local pride in frontier miracles). Did three circuit preachers visit each place with gifts of whiskey, tobacco, and gunpowder?