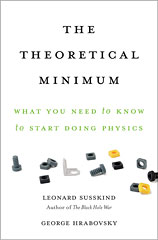 Title: “The Theoretical Minimum: What You Need to Know to Start Doing Physics”

Blurb: “A book for anyone who has ever regretted not taking physics in college.”

Review: “NOT a ‘popular’ physics book with a bunch of fluffy, non substantial speculation about membranes, strings, fractals, superpositioned states and multiple universes! Has real, tough, solid content with a LOT of advanced formulas, including tensors and many partial derivatives… There also is an appendix on Central Forces and Planetary Orbits and ‘math interludes’ on Trig, Vectors, Integrals and PDE’s.”

Footnote: Now that you mention it, we’ve never regretted not taking physics in college.

My punishment was a career that largely consisted of explaining law to scientists and science to lawyers.

Whaaa?
Is this some sort of extreme sport that is played at Greendale Community College?

Isn’t “Tensor” a kind of lamp?

Hey Lefty, ready for the Stupid Bowl? What do people buy in SF, kale chips and arugula dip?

I have the Puppy Bowl on. Not seeing any pugs.

@Dodgerblue: Because they’re ugly. I mean mean. I mean above such things.

@Dodgerblue: We are starting off with two types of dip (artichoke and onion), beef sliders, buffalo wings, and 6 bottles of wine (for 4 people).

@SanFranLefty: My wife is at the Joffrey. I’m hanging out with a friend’s dog.

Okay, since my TV Vote literally counts, I’ve tuned in the Puppy Bowl.

(Full Disclosure: I’m not a Scout.)

It’s now after o430 central Monday and I still don’t know who won, or give a shit. I went to my local Kroger mid-afternoon and the parking lot was full. Inside were an unusual lot of drooling louts who looked lost. I figured it out when I heard one of them ask a woman “where’s the beer?” These “real men” had never been to the grocery store before but they had to stock up on man food and drink for “the big game”. Regular Army Artillery ex-101st Airborne Vietnam vet and SCUBA instructor GT-R–drivin me felt a bit sorry for these poor lame dipshits, who probably need guns to prop up their limp dicks. I did whatever I did just for fun, not to impress anyone. It’s a LOT more fun that way.

But I keep hoping Mister Bates will get free. When he was young, did they call him Master?

@RevZafod: When he was young, did they call him Master?

Only once. Then six-year-old Master Bates took a butterknife to their throat.

@RevZafod: How is that GT-R holding up? Do you take it to the track?