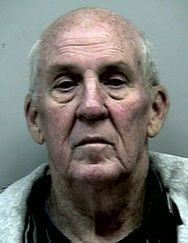 Well, what do you think it equals?

A 69-year-old war veteran and former missionary was arrested over the weekend on the suspicion of killing a 22-year-old Cuban immigrant who mistakenly arrived in his driveway because of faulty GPS directions.

Friends who were in the car with Diaz told WSB-TV that they were trying to pick up a friend on the way to ice skating on Saturday but their GPS directed them to the wrong address. The friends said that they waited in the driveway for a few minutes before Sailors emerged from the house and fired a gun into the air.

At that point, Diaz tried to turn the car around to leave, but Sailors fired another shot, striking the immigrant on the left side of the head. The group, which included a 15 and an 18 year old, said that Sailors held them at gunpoint until police arrived.

We’re not saying that a 69-year-old is not qualified to own a firearm, but maybe, like driving in some states, this privilege (not really a right) should be evaluated more rigorously as the permit holder ages. And hey – this is Georgia – did Sailors even have to pass basic safety?

And you know what? It’ll be a Georgia jury – bet you he gets off or the jury is hung.

Naturally this had to be in metro Atlanta. Emphasis on metro, not Atlanta proper.

For a change of pace some heart warming news – seriously.

Forty years ago Illinois required folks over 65 to take driving tests. Since we oldes vote like lemmings march to the sea, they have moved it to 75. Many states pay no attention to requiring seniors to prove they can still drive unless there are complaints or accidents. Age is not fair. People die from cancer at 30, and some of us fools are pulling 65 and still skiing double black diamond slopes. It only makes sense that having some sort of testing beyond being able to fog a mirror should be required to drive cars and to own guns.