Confessions of a Bitter Man 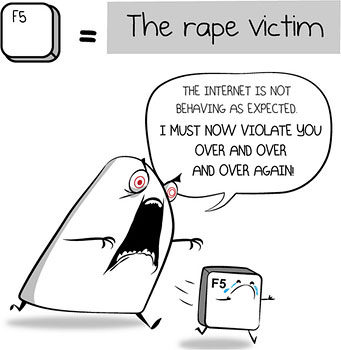 We don’t know Jack Stuef. But after reading The Oatmeal’s Epic Fisking of his BuzzFeed article about the cartoonist, we feel like we know way too much about him.

If you know Jack Stuef at all, it’s likely from his stint at Wonkette, which we missed, because our strike is almost five years old. And if the name still doesn’t ring a bell, think about the Blingee calling Trig a retard.

So Jack’s moved on, but not to a better place. His BuzzFeed article, framed as a hard-hitting exposé of a comedic fraud, can easily be boiled down to a simple thought:

That asshole got away with it and I didn’t.

What did The Oatmeal’s Matthew Inman get away with? Why, he also published — and also retracted — a cartoon that rubbed some people the wrong way. But unlike Stuef, Inman wasn’t punished for it — The Oatmeal remains beloved by its army of fans, its book approvingly pitched by a modest satirical website that has yet to live up to its world-dominating potential.

How intent was Jack on making The Oatmeal pay for his sins? He apparently invested some (failed) quality time trying to get other webcomic artists to dish some dirt. He used a blatantly fake SodaHead profile to call Inman a married Republican with daughters, when Inman is actually a single childless Democrat. He derided Inman as a former spam king when Inman spent all of six months long ago on an SEO venture.

Worst of all, Inman earns a comfortable living drawing The Oatmeal. The nerve!

So what does Jack say are Inman’s sins? Here’s how Jack describes the cartoon retraction:

At first Inman ignored the criticism, but by Tuesday, he felt enough heat to remove the panel with the rape joke.

And here’s how Jack originally responded to the Trig criticism:

I regret this post and using the word “retarded” in a reference to Sarah Palin’s child. It’s not nice, and is not necessary, but I take responsibility for writing it.

Inman is finding what big American businesses have known for decades: Keeping your mouth shut is generally better for business.

And here’s what Wonkette replaced Jack’s Trig post with:

We have decided to remove the post as requested by some people who have nothing to do with Sarah Palin, but who do have an interest in the cause of special needs children. We apologize for the poor comedic judgment.

Here’s what Jack says about Inman’s fundamental crime against comedy:

Inman is also a fitness buff. Though he draws himself on The Oatmeal as a blob of a man, he’s actually young and attractive.

And here’s the blob of a man who wrote that: 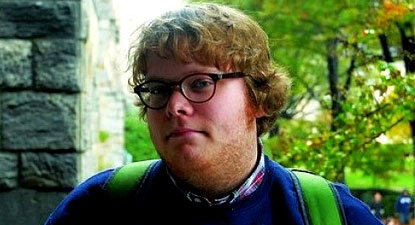 There’s more, but that’s the flavor of it. Jack Stuef is a bitter, bitter man, which is a terrible thing to be when you’re 23-ish. You’ve got decades ahead of you, kid. Don’t waste them seething in resentment.

Especially when you could have nailed the damn thing.

Jack, as much as anyone, knows what it’s like to be an Internet comic whose stuff hits the fan. Instead of resenting Inman for his success, Jack could have told the hilarious story about being on the receiving end of an online shitstorm, how that one thing you did, which you thought uproariously clever at the time, resulted in Epic Fail.

And for Jack, who aspires to TV writing, it’s Sitcom 101: Make it relatable. Tell the joke on yourself. People like that. It’s human.

Speaking from experience:
a) It doesn’t help one get laid
b) If you can’t use yourself as the joke then the odds of you becoming not angry and bitter as an old man are not good.

My favorite part of Inman’s response to Steuf is when he explained that the “publicist” who declined the interview was just his mom responding to the email declining the interview because she’d never heard of Buzzfeed.

Also, I understand why people objected to the tone — why Inman had to pull it — but that’s a hilarious drawing. I can’t stop giggling at it.

Jack goes on at length about how Inman is being dishonest in his subject matter — Inman doesn’t give a shit about semicolons! — but you can’t hack that kind of illustration. Inman’s got the goods.

@nojo: Well I can’t quite figure out why the cartoon is so offensive, it just seemed dumb. The Sarah Palin/Trig thing that Jack did, OTOH, should be forever banned for no other reason than the shitty production quality and inducement of strokes.

BTW, thanks for the Oatmeal link, because I was able to stumble upon this hilarious and oh so true cartoon about dogs that dog owners/lovers like TJ/ Jamie Sommers /TJ, to name one, would enjoy. The “Today’s Agenda” panel made me crack up out loud. And yes I guess that I am therefore one of the idiot fans who fell for this guy’s shtick, at least according to the fat dude who apparently has never met a razor he can use.

Dude’s good. Which is another missed opportunity by Jack. Instead of flailing at The Oatmeal for being “inauthentic”, he might have contemplated why it’s hilarious despite that.

I have to wonder what it would be like to spend more than five minutes with Jack. Probably not fun.

My dear departed dog avoided rolling in poop. She was like my mom and insisted on avoiding dog stink. She preferred her blankets clean (when dirty she ripped them out of her crate for my mom to wash) and to roll in the laundry (especially the sheets) after it came out of the dryer. She even liked to smell like Chanel No 5 (my mom’s perfume) to my amusement and my mom’s dismay.

She was a strange dog.

@ManchuCandidate: She was a cat in dog’s clothing.