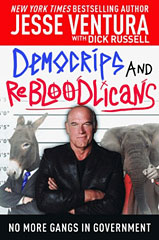 Blurb: “Exposing the ineptitude and gang-like mentalities of both parties, Ventura advocates the replacement of the two-party system with a no-party system based on the ideals of our Founding Fathers.”

Review That Ignores the Entire History of Wingnut Publishing: “It’s never popular to come out and say that things stink.”

Customers Also Bought: “Where Did the Towers Go? Evidence of Directed Free-energy Technology on 9/11”

Footnote: The ideals of our Founding Fathers lasted for exactly two elections.

I believe Mr. Ventura’s head was driven into the mat a few times too many …

@blogenfreude: But what’s the excuse for everybody else?

I actually think he might have a point regarding a “no party” system. There, I said it.

Might be a tad late for that now though.

@Tommmcatt May Just Have Some MJ In His System As Well, So What?: You and Benjamin Franklin. He advocated one chamber elected every year. He declared that political parties and/or a standing army was the death of the republic. He taught Jefferson all he knew in late-nite jock strap wrestling bouts on the 14th floor of the Boston Marriot.

@Tommmcatt May Just Have Some MJ In His System As Well, So What?: Well, here’s the problem: He proposes a no-party system as a solution to money in politics.

But all this does is remove the label.

If everybody runs nonpartisan, money can still buy candidates — even teams of otherwise nonparty candidates. And even without labels in Congress, nonparty Congresscritters would still caucus together to form voting blocs — parties in all but name.

Result: Nothing changes. Which is why this is a stupid idea.

@nojo: Darling. It’s Catt. Let’s all gather round to love him. But let’s all understand that his brains were left behind at Splash Bar. Yes he’s cute – we embrace the plus size. But we need to understand that all those years of wearing assless chaps is going to take a toll. I don’t know what led him to drop his jeans but there we are. He’s a sensitive and intelligent… OK… He’s a likable and caring… OK… he’s insanely hot and the master of the cycle bun buster spandex sweat workout… He’s one of us. Loser. Fake. Needy…

I’ve got the blahs today. You know what would cheer me up? Another Romney gaffe/scandal. He seems to be well-supplied, so let’s get going.

@Dodgerblue: Well, there’s entering “USA” as a “foreign country” on his tax returns, but that’s really reaching. And Ann apparently canceled all public appearances after guilt-tripping GOP backseat drivers, so no fun from that corner.

But hey, it’s only Sunday. Mitt’ll be here all week.

@Dodgerblue: He did say on 60 Minutes that the uninsured could always just call and ambulance and go to the emergency room. The interviewer says in disbelief,”But that’s the most expensive way to do things.” Orangeman is unfazed.
http://www.huffingtonpost.com/2012/09/23/mitt-romney-60-minutes-health-care_n_1908129.html

@Dodgerblue: I’m with MissCyn on this one — using the ER as your twice-yearly checkup is one of the (many) major reasons we’re fucked on healthcare expenditures right now. The fact that RomBot2000 would recommend it suggests dire suggestions about what’s going on in his head.

The downside is that the people who were already going to be voting for him will be unfazed by this, as they’re probably already practicing ER visitors. It will just seem like common sense.

@Dodgerblue: You know what would cheer me up? Another Romney gaffe/scandal.