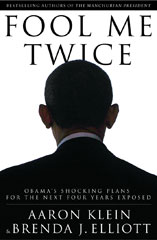 Title: “Fool Me Twice: Obama’s Shocking Plans for the Next Four Years Exposed”

Here are just a few samples from dozens upon dozens of specific schemes unveiled herein:

Review: “I can not read this book any longer. The writing style is torturing my brain.”

Footnote: Funny how the most deranged Wingnut fantasies match our deepest desires, neither of which have anything to do with the reality of the matter.

So if Obama gets re-elected he’s going to do all those things he couldn’t possibly have done even when the Democrats had majorities in both houses?

Writing wingnut treatises must be the easiest job in the world. It’s kinda like being a Science Fiction writer, but being allowed to disregard all plausibility… you know, space-ships driven by perpetual motion engines and an evil galactic empire whose symbol is a green four-sided triangle.

It’s all part of the plan:

http://www.correntewire.com/explaining_the_matrix_think_updown_not_rightleft#more
(excerpt)
In reality there is only one significant political agenda these days: the maximization of capital growth through the dismantling of society, the continuing implementation of neoliberalism, and the management of empire.

Marx may have failed as a social visionary, but he had capitalism figured out. It is based not on productivity or social benefit, but on the pursuit of capital growth through exploiting everything in its path. The job of elite planners is to create new spaces for capital to grow in. Competitive imperialism provided growth for centuries; collective imperialism was invented when still more growth was needed; and then neoliberalism took over. Like a cancer, capitalism consumes its host and is never satisfied. The capital pool must always grow, more and more, forever–until the host dies or capitalism is replaced.

Nothing is going to get any better for the majority of humanity or in the environment. We’re on our way out as a species.

@Serolf Divad:
Numerous examples like Red Dawn, the rascist Turner Diaries or the infamous “Plan B” intel document which proclaimed that the Soviets were building a gimungo Navy they couldn’t afford (even in their dreams) and gave rise to the 600 ship Navy that Raygun and Lehman pushed to build which nearly bankrupted US Amercia.

Writing wingnut treatises must be the easiest job in the world. It’s kinda like being a Science Fiction writer, but being allowed to disregard all plausibility
Ha, we SF writers call them fantasy writers.

So if Isaac (one of my many names) inundates Tampa will the Republicans call on FEMA to bail them out?

@Benedick: Forever true to their deeply held principles, delegates will reject all public aid and hole up at the hooker joints.