Stinque
Home Latest Comments Log in
If it smells, we’re on it.
Stinque
Mastodon: @stinque@mas.to
Sad But Not Surprising 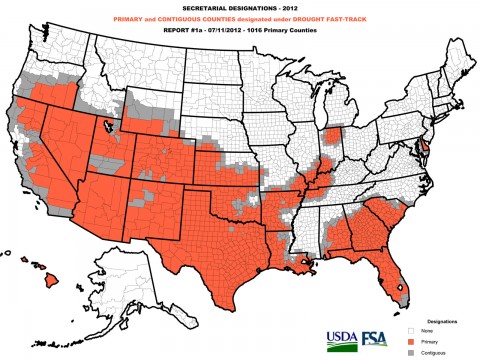 This is not good:

The blistering summer and ongoing drought conditions have the prompted the U.S. Agriculture Department to declare a federal disaster area in more than 1,000 counties covering 26 states. That’s almost one-third of all the counties in the United States, making it the largest distaster declaration ever made by the USDA.

The declaration covers almost every state in the southern half of the continental U.S., from South Carolina in the East to California in the West. It’s also includes Colorado and Wyoming (which have been hit by devatasting wildfires) and Illinois, Indiana, Kansas and Nebraska in the Midwest. However, it does not include Iowa, which is the largest grain and corn producer in the U.S. This map show the counties affected.

Any chance we’ll take it seriously when our food supply (not to mention water) is affected?

What’s up with Delaware? And Mississippi? The east-west divide in Kentucky is interesting. The tobacco is safe, but the corn and soybeans are not.

Oil companies our are friends. Why would they lie about global warming? Really? 49 billion reasons not to… right?

OT: can anyone explain to me why this is happening.

The red states are well represented on this map. Will they want federal handouts aid?

@blogenfreude: Are you kidding? I would totally see that! Twins is hilarious.

@ManchuCandidate: Global warming is a myth, and Al Gore is fat.

@mellbell: It was shit.

@blogenfreude: I just called my agent.

@blogenfreude: Ahnold needs $ to pay off Maria. I think he showed up at Comic Con yesterday

In other news, Omarosa makes up for all her reality-show evil in one gesture.

@Dodgerblue: Did Kindergarten Cop 2 happen? If not, that shit is next.